Has the War in Ukraine Damaged Russia’s Gray Zone Capabilities? 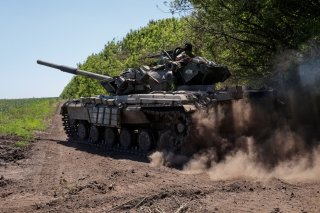 Four months into the conflict, the war in Ukraine remains primarily a conventional fight, replete with troop movements, missile strikes, and artillery barrages. Consequently, the damage to Russia’s war machine has been measured principally in conventional terms—troop casualties, equipment destroyed, and the like. And yet, there has been one less prominent element of collateral damage from Russia’s war in Ukraine: its ability to conduct gray zone operations.

The gray zone has long been a focus of American policymakers. In 1948, famed American diplomat George Kennan warned of the emergence of “political warfare,” which he defined as “the employment of all the means at a nation’s command, short of war, to achieve its national objectives.” Later scholars slapped other labels on it, but all of them essentially refer to a host of diplomatic, informational, economic, and military actions that states deploy to achieve to achieve their objectives below the threshold of full-scale conflict.

During the Cold War, the Soviet Union was seen as master of this domain, and Russia—as the heir to the Soviet legacy—enjoyed a similar reputation, particularly after its takeover of Crimea in 2014 and its interference in the 2016 U.S. presidential election. Russian gray zone warfare has been the subject of intense academic and policy scrutiny. It has been to the topic of dozens, if not hundreds, of studies. Many of these studies painted the Russians as blackbelts in this form of psychological jujitsu, capable of achieving their desired outcomes at minimal costs while confounding their adversaries’ ability to mount an effective response.

After the Ukraine invasion, however, it is worth reassessing just how good the Russians are at these forms of modern political warfare. The very fact that Russia felt the need to resort to overt, large-scale conventional force in Ukraine—despite years of operating there in the gray zone—demonstrates that at least in Russian president Vladimir Putin’s mind, these ambiguous uses of force in Ukraine failed to achieve their desired ends. And if Russian gray zone activity could not achieve success in Ukraine, despite the two states’ common histories and cultures, one wonders how well it could succeed elsewhere. What’s more, Russia’s ability to conduct gray zone operations has surely suffered and will suffer in the years to come.

To begin with, Russia will now be playing on more unfavorable terrain. Russia has never had favorable public opinion polling in Europe or the United States, but its popularity has cratered since the start of the Ukraine conflict. In Pew polling from March, 70 percent of Americans view Russia not just as a competitor, as it did prior to the conflict, but as an outright enemy, up from 41 percent in January. European views of Russia have similarly trended downward.

Admittedly, Russian gray zone activity was never going to help it win a popularity contest. After all, Americans have had a consistently negative view of Russia since the 2008 Russo-Georgian War, and many European attitudes have been only a little more favorable. Before the Russo-Ukrainian War, however, Russia was, at least, feared—viewed by some as highly technically and tactically proficient, if ruthless in achieving its objectives. After the Ukraine invasion, Americans still fear Russian nuclear weapons, but the chimera of military competence has been shattered. That’s important because Russia’s gray zone operations can hinge on the perception, rather than the actuality, of the coercers of power to influence their targets. If one wants to achieve aims without resorting to brute force, then, as Machiavelli argues, princes need to be loved or, better yet, feared. What the Ukraine war proves thus far is that even smaller countries can stand up to Russian military might, if they are not afraid.

On top of this, Russia has lost a lot of its actual geopolitical and economic leverage. Russia’s key source of economic leverage—its energy resources—remains, but its ability to coerce countries is weakening as some countries seek alternative sources and those that still buy energy from Russia do so at a discount. The European Union has proposed a ban on Russian coal and phasing out Russian oil by the end of the year. Divesting from Russian gas will be harder, seeing as it still provides close to 40 percent of Europe’s natural gas. Still, Russia is already taking drastic short-term measures that will, in the longer term, weaken it further, such as cutting off Poland and Bulgaria’s gas lines and functionally removing those as a future source of leverage. The rest of the European Union, meanwhile, is trying to reduce its dependency on Russian gas by two-thirds by the end of the year.

Russian intelligence networks in the West, too, have been dealt a significant blow. The United States and its allies have booted over 400 Russian diplomats from their posts after many were accused of being undercover intelligence operatives. For perspective, that’s almost triple the number of Russian diplomats expelled by NATO countries in 2018 in response to Russia’s poisoning of former Russian intelligence officer Sergei Skripal in Salisbury, England, which at the time was the largest of mass expulsion since the Cold War. On top of this, data breaches have exposed the identity of hundreds more Russian agents, minimizing their ability to operate covertly, at least in the West. And American and European intelligence agencies have continued to uncover Russian operatives as the conflict has progressed.

The Ukraine conflict has also indirectly damaged Russia’s vaunted technology sector. The war—and the West’s sanctions and Russia’s domestic restrictions on speech that followed—have prompted significant “brain drain.” According to media accounts, some 50,000 to 70,000 technology workers have already left the country and an equal number or more are projected to do so in the future. While the impact of this exodus is still unknown, it stands to reason that Russia will face a depleted talent pool to staff its cyber expertise.

The Russian information environment has suffered as well, at least in the West. From the beginning, Ukrainian voices have dominated much of the Ukraine conflict, as Russian narratives struggled to gain traction internationally. Russian media outlets—RT and Sputnik—were banned in the European Union and the United Kingdom. RT America shut down in March. YouTube, Meta, and TikTok kicked these outlets off their platforms, although with admittedly mixed success. True, the Internet Research Agency—the troll factory perhaps best known for its role in election interference—is still promoting pro-Russian narratives. Still, the social media companies are cracking down on online Russian disinformation, so the effectiveness of Russian trolls is, at best, a question mark.

Even Russia’s ability to use “little green men”—covert uses of force—may have been degraded due to the Ukraine war, although it’s not clear to what extent. The Russian military has suffered significant casualties in Ukraine. And while the actual numbers are disputed, Russian airborne and special operations forces reportedly are particularly hard hit. Beyond those losses, all European countries are now acutely alert to the dangers of Russian military incursion—if they were not already—which will further limit Russia’s ability to exploit its ambiguous uses of force.

Admittedly, none of these recent developments spell a death knell for Russian gray zone activity. Russia may eventually be able to restaff its embassies. New Russian trolls will take the place of accounts that have been taken down by media and tech companies. RT and Sputnik may eventually return to the Western media market. Even Russian antipathies may subside, as global attention moves to other crises. And the motivation for Russia to conduct gray zone activities will almost certainly be there, especially if Russia emerges from the conflict embittered and out for revenge, but militarily depleted and lacking a conventional option.

Still, for Russia to restore its gray zone capabilities—much like rebuilding its conventional capabilities—it will take some time. And this, in turn, presents an opportunity for the United States and its European allies. At their core, Russian gray zone operations prey on Western vulnerabilities, exploiting fissures in democratic societies to sow discord and chaos. If the West uses this period of relative quiet from Russian meddling to repair its societal fractures, then it could emerge stronger.

Ultimately, Russia’s actions are to blame for the damage done to its gray zone capabilities, but it’s the West’s choice to see whether this respite represents a short-term aberration or presents opportunities for some long-term fixes.

Raphael S. Cohen is a senior political scientist and the director of the Strategy and Doctrine Program, Project AIR FORCE at the nonpartisan, nonprofit RAND Corporation.