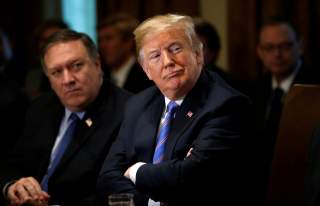 Expectations were low heading into the Helsinki summit, but the United States and Russia still managed to sail their listing bilateral ship directly into the rocks of the Russian cyber-meddling controversy. Repairing the damage will be difficult during the Trump presidency. The chief challenge the two countries now face is not normalizing relations, but preventing tensions from spiraling disastrously out of control.

The political formula for getting past the cyber controversy had long been obvious: Russia and America agree to disagree over Russian electoral meddling, Washington imposes targeted sanctions incentivizing good behavior, and the two presidents task their governments with laying out ground rules limiting future interference in domestic affairs. President Putin played his part in that awkward dance, rejecting accusations that Russian state actors interfered in the 2016 election but tacitly acknowledging that non-state actors did, while suggesting that a U.S.-Russian cyber working group begin to establish rules of the game for cyber operations. But President Trump failed to use the opportunity afforded by Special Counsel Mueller’s recent indictments of GRU cyber operators to condemn Moscow’s actions unequivocally, choosing instead to voice doubts about whether Russia was involved at all.

He may not get another opportunity. Trump’s ambivalence at the summit press conference poured gasoline on America’s simmering domestic political fire and narrowed his already slim room for maneuver with Moscow to almost nothing. His post–summit attempt to walk back his doubts has done little to change perceptions. Abjuring the most obvious explanation for Trump’s skepticism—his fear that affirming Russian interference might taint the legitimacy of his election victory—his critics have anchored on the so far unproven belief that he actively conspired with the Kremlin to defeat Clinton or, more implausibly, is a longtime agent of Russian intelligence. Under the circumstances, Trump will have great difficulty convincing either Congress or his bureaucracy to pursue any form of engagement with Russia. Agreeing to disagree with Moscow over its cyber misdeeds while focusing on rules for preventing future transgressions is probably no longer viable during his presidency.

The alternative—an exclusively punitive response to cyber operations—could overwhelm the broader bilateral relationship. Trump’s mishandling of the summit press conference has whetted Congress’s appetite for adding further punishments on top of its already toughened sanctions of Russia. If it does, this would reinforce doubts in Moscow that Trump can normalize relations with Russia regardless of his intent. From Russia’s perspective, the potential rewards of working with a hamstrung Trump to manage U.S.-Russian differences and advance shared interests would plummet, while punishing lower levels of the American government for perceived anti-Russian actions would grow more attractive. The Kremlin has few economic levers to pull, but it has an abundance of asymmetrical options in its toolkit for countering Washington. The more convinced it becomes that relations with the United States cannot improve anytime soon, the less constrained it will feel in undermining American interests in Iran and North Korea, and the more it will focus its foreign policy on other parts of the emerging multipolar order: China, Germany, France, India and other regional powers. Moreover, Putin’s “incredible offer” to allow U.S. investigators to accompany Russian officials in interrogating the GRU officers that Mueller has charged with cybercrimes looms as a trap—a precedent that could lead to reciprocal charges against American intelligence officers suspected of penetrating Russian cyber networks.

As the prospect of U.S.-Russian détente recedes, the dangers of an unintended spiral of confrontation will grow. Washington and Moscow are each stuck in a pernicious perception of the other’s intentions that will make managing any crisis a perilous endeavor. Russia has long believed that the Washington foreign policy establishment hopes to overthrow its government and break up the country. The United States more recently has convinced itself that Russia is intent on destroying American democracy. These views are exaggerations—Russia and America are strategic competitors, not mortal enemies—but they nonetheless heighten the danger that each might overreact in a crisis, misperceive the signals the other is sending, and assume the worst about the other’s intentions. When a state believes its very existence is at stake, its resolve and willingness to take risks in conflict situations run startlingly high. And when strong resolve and high risk-tolerance are overlaid against a background of increasingly unconstrained “shadow warfare” between the world’s foremost nuclear powers in the cyber, military, economic, and information domains, the chances of a crisis are great.

Mitigating the dangers of a U.S.-Russian escalatory spiral will be difficult. Deep mistrust on both sides has made them question the utility of diplomatic discussions of their strategic goals. Each side believes the other habitually lies about its activities and intentions. The Helsinki summit has reinforced these perceptions. Yet, if we are to avoid the worst possibilities in our increasingly perilous relations with Russia, the arduous process of reestablishing channels of communication and rebuilding trust is essential. In the wake of a meeting that was intended to renew dialogue but has probably stalled it, that process looks likely to prove longer and more arduous than ever.

George Beebe is director of the Center for the National Interest’s intelligence program. He formerly served as chief of Russia analysis at the CIA, and as special advisor to Vice President Cheney on Russia and the former Soviet Union.