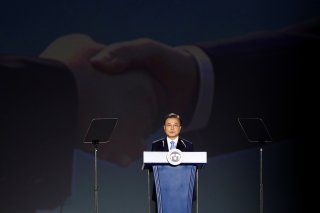 Still, compared to other trilaterals in Asia, the U.S.-Japan-ROK relationship has been one of the most successful. By brief comparison, the China-Japan-ROK trilateral more easily falls prey to the anti-Japanese sentiment shared by China and South Korea, severely inhibiting their ability to cooperate with Japan. Though Washington helped mold Japan-ROK relations at key intervals during the 20th century, the United States is without a direct stake in the contemporary debate over history and identity. It thus has an advantage compared with Beijing in pursuing trilateral cooperation with Tokyo and Seoul.

As the advantages of trilateralism are clear, it seems prudent for the United States to further bolster this relationship in areas of common interest. Deterring a North Korean attack remains a principal shared objective of U.S.-Japan-ROK trilateralism. Building a united front against China remains a disputed second objective, as South Korea is reluctant to join efforts perceived as being “anti-China.” At the least, the United States should recognize both the constraints and opportunities to further expand trilateral cooperation. Such an approach might include the following elements:

1) Recognize uncertainties. There are major uncertainties that could change the prognosis of future U.S.-Japan-ROK cooperation. First is how receptive the world will be to Washington's resumption of global leadership after four years of “America First” rhetoric. Optimistically, the United States would restore or even upgrade its relations with allies and partners. The initial reaction to Biden’s declaration that “America is back,” however, has been mixed. It remains to be seen how Biden’s diplomatic efforts will translate into results in an atmosphere of skepticism.

The second major uncertainty is how domestic politics in South Korea and Japan will affect their foreign policy choices. South Korea’s presidential elections in 2022 make 2021 a fraught campaign year. Candidates may cave to the temptation to use Japan as a scapegoat to score easy political points. An early litmus test will be Seoul and Busan’s mayoral elections in April. Another development to follow will be how well Tokyo and Seoul coalesce in response to the possible first weapons test by North Korea in the Biden era.

Finally, if another coronavirus wave descends, a worldwide economic recession could further tax domestic resources, set back multilateral institutions, and perhaps serve as an improvised global leadership test between Xi and Biden.

2) Strengthen liberal internationalism by leaning into history. Today, it is clear that the liberal rules-based order which the United States helped create is increasingly under pressure. This project, if it is to be sustained, must be the focus of liberal democracies that are beneficiaries of the system and see its continued legacy as a worthy endeavor. For the U.S.-Japan-ROK trilateral relationship, this could mean redoubling the collective focus not on what happened before 1945 but on subsequent history. Throughout the postwar era, Japan has remained a democratic, pacifist country amid lively debates for change. South Korea has evolved into an energetic democracy, a model for developing nations, and a recognized middle-power. Together with the United States, a renewed focus on the successes of the recent past could help stabilize Japan-ROK relations while allowing liberal values to flourish in Asia. While this would certainly irk China, democracies around the world may soon need to prioritize their values as much as they do their interests if the U.S.-China rivalry intensifies. South Korea’s invitation to the upcoming G7 in June—possibly the site of a new global democracy summit—would be a good first step to embedding Seoul within a broader web of democracy-building initiatives.

3) Expand cooperation in nontraditional security areas. Modernity has brought new challenges to the security environment. Globalization has ushered, along with all its benefits, the threat of cyberwarfare, fast-spreading pandemics, and climate change, among others. Given the challenges of reaching a global consensus on these issues, Washington, Tokyo, and Seoul could form the core in developing solutions in each of these emerging areas.

Each nation certainly has a shared interest in advancing trilateral cooperation in these areas. All three have been subject to major cyberattacks targeting their critical infrastructure. Washington, Seoul, and Tokyo have dealt with the spread of coronavirus with varying degrees of success, South Korea’s response being the most prominent. The three could develop new health standards in parallel to the now-politicized World Health Organization. Climate change is also an area of existential risk, with Japan and South Korea, in particular, facing greater exposure due to their susceptibility to unseasonal typhoons, rising sea levels, and dependence on global energy supplies. As advanced technological innovators, the three nations additionally have much to lose from thefts to their intellectual property as well as dependencies on foreign supplies of critical technological inputs like rare earth elements among other strategic goods. And, finally, as mature liberal democracies at the leading edge of improvements in artificial intelligence, robotics, and information communications, it will be up to them—or else China—to shape the governing rules and norms of these building blocks of the emerging digital economy in Asia.

A Place to Start

No doubt these efforts will take considerable discipline and energy to implement. China necessarily gets a vote on the future evolution of the region, as Beijing will push back against any effort which it perceives as a move to contain it. Indeed, engaging China will be critical to the ultimate success of any North Korea policy. Despite potential opposition and the need to cooperate with Beijing where interests align, it is ultimately up to the United States and its allies not merely to counter risks and threats but to push forward a positive vision for the region. Re-energizing trilateral cooperation is undoubtedly an essential place to start.

Daniel Aum is the former senior director of Public Affairs at the National Bureau of Asian Research.

Elliot Silverberg was a fellow at Georgetown University's Institute for the Study of Diplomacy and is currently a nonresident James Kelly fellow at the Pacific Forum in Hawaii.