Here’s Where the Coronavirus Crisis Could Help Thaw Diplomatic Standoffs 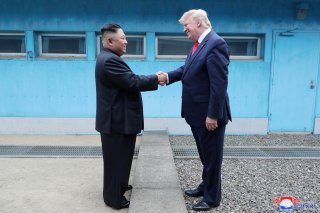 In this moment of global tragedy, but also solidarity, it is worth asking: are there problems we might actually be able to solve in the time of coronavirus? Can we find opportunity in this terrible crisis?

The potential for diplomatic breakthrough seems plausible in places where pride, stubbornness, and emotional history have impeded negotiations that might otherwise go forward. In such situations, coronavirus might provide an excuse for rethinking entrenched positions—and a sort of diplomatic cover for leaders to change their minds.

This idea will not work everywhere, of course. Where negotiations are complex, where two sides are far apart and it is difficult even to specify the terms of a deal, a sense of greater danger will not necessarily be enough to focus the minds of diplomats. In fact, due to limited bandwidth, this will likely be a tough time for Washington to be creative. So facilitating negotiations between groups like the Taliban and the government of President Ashraf Ghani of Afghanistan, while always worth a try, is a huge longshot.

Yet there are other places where the logic of facing a common peril may break through previous logjams. Two more promising situations are North Korea and Iran. Venezuela, in a different way, may provide a third.

President Donald Trump has reportedly just sent a letter to North Korean leader Kim Jong-un offering emergency help with the coronavirus outbreak, a decent and good gesture by the American head of state which North Korea has publicly acknowledged and appreciated. That is all well and good. But why not try to use the moment to revive the diplomacy that Trump and Kim had established in 2018? That diplomacy gradually fell away over the course of 2019, but this could be a chance to reverse that.

The reason this might work is that the terms of a deal on North Korea are not hard to imagine, and have not been hard to imagine for a long time. But hard-line thinking on both sides has impeded movement towards a compromise. COVID-19 may be able to help thaw the situation. Rather than expect North Korea to give up all its existing nuclear bombs, in return for a lifting of all sanctions and major provision of economic aid, we should aim lower. Washington could propose a verifiable deal that would have Pyongyang eliminate its ability to make more bombs in exchange for a partial lifting of international sanctions—especially those imposed by the United Nations since 2017 that have driven the North Korean economy into recession.

On Iran, similarly, the terms of compromise are reasonably clear. This idea will not please Secretary of State Mike Pompeo, who reportedly recently advocated putting our metaphorical boot on the throat of the coronavirus-stricken Islamic Republic—such as perhaps even sinking some of Tehran’s Navy in retaliation for recent attacks against American bases in Iraq carried about by Iranian-backed Shia militias. But a new agreement with Iran could constitute a substantial improvement on President Obama’s landmark diplomatic achievement of 2015, the Joint Comprehensive Plan of Action. Moreover, this breakthrough could appeal to President Trump in an election year.

Whatever the Iran nuclear deal’s merits, it also had major limitations—notably, the fact that many of its restrictions on Iran’s nuclear activities would expire in either 2023 or 2025. That was a highly optimistic way to limit the nuclear program of a country that had already demonstrated hostility against the United States, and a strong proclivity to use terrorism and other violence for four consecutive decades. Why did we expect détente to emerge and quickly solve the problem in the fifth decade?

So with this deal, the compromise seems fairly straightforward as well: lift most of the sanctions that the United States has reimposed since Trump withdrew the United States from the deal in 2018, in exchange for an indefinite prolongation of the restrictions on uranium enrichment and other activities imposed by the 2015 deal. Iran should, at a minimum, also agree to regional dialogues on the civil wars it has helped stoke and make a nod at accepting, if not approving, Israel’s right to exist as well. The latter move in particular would be a hard step for Iran to take under normal conditions—but these are hardly normal conditions. If Teheran takes such a step, we can also expedite international medical and humanitarian help given the way the coronavirus has put that nation on its back.

Finally, there is the tragic case of Venezuela. The Trump administration was on reasonable ground in trying to push the illegitimate and corrupt leader of that country, President Maduro, out of power through a form of economic strangulation. But its sanctions-based effort has not worked. And the people of Venezuela are paying the price—a price that has grown astronomically given the COVID-19 debacle. It may be too much to expect the hard-hearted Maduro, who clearly has a great tolerance for other people’s pain, to step down in exchange for the lifting of sanctions and provision of humanitarian aid. And we do not want to allow him to access funds that can be used to buy weapons for his military or his militias. But a variant on the oil-for-food program that the world employed in the 1990s to help the people of Iraq even while Saddam was still in power could make sense here. Venezuela could be allowed to pump its oil as long as the proceeds went into a U.N.-controlled fund that would provide food and medicine to the people of that country.

As President Eisenhower once said, when you have a problem that is too big to solve, enlarge it. Coronavirus has done just that in a number of hotspots around the world. Maybe in one or two of them, we can find common cause in this time of global agony and go for a major diplomatic breakthrough.