Here Are the 3 Takeaways from Trump's UN Speech 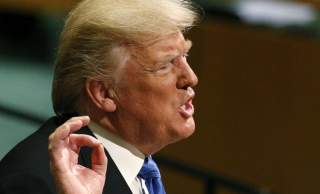 On Tuesday morning, President Donald Trump addressed the UN General Assembly for the first time, unveiling his “American First” vision on the world stage. His speech was marked with his trademark bellicosity as he spoke about respecting sovereignty, destroying North Korea, targeting Iran and criticizing Venezuela. While the president did not reveal anything new about the U.S. stance on various issues, the speech had three main takeaways that point to an emerging Trumpian grand strategy that includes buttressing homeland security and increasing the military budget.

The first takeaway was recreating the Bush administration’s “axis of evil” by targeting North Korea and Iran’s varied nuclear ambitions. Referring to Kim Jong-un as the “rocket man,” the president declared the United States as “ready, willing and able” to potentially attack North Korea, declaring the state’s pursuit of nuclear weapons as “reckless” and a “suicide mission.” He did look toward the UN, but not without his known skepticism of the organization: “That’s what the United Nations is all about; that’s what the United Nations is for. Let’s see how they do.” Yet, the UN has been at forefront of countering North Korea: fresh UN sanctions were placed on North Korea after it fired its latest missile over Japan on August 15 following the joint U.S.-South Korea military exercises.

The second takeaway from the president’s speech was a familiar use of nationalist language and an emphasis on sovereignty. Yet, as he called on world leaders to “fulfill our sovereign duties to the people we faithfully represent,” his actions at home have been doing the opposite. For example, a month after taking office, he signed an executive order halting refugees from six Muslim countries, affecting thousands of American families with Middle Eastern roots. Most recently, he moved to end the Deferred Action for Childhood Arrivals (DACA) program that shielded illegal children from deportation, again affecting thousands of American families and businesses. Furthermore, by singling out North Korea, Iran, Cuba, Syria and Venezuela, it is clear that not every state’s sovereignty needs to be respected. Being so brazenly selective about the sanctity of sovereignty can unnerve targeted nations and incentivize destabilizing arms races. The president’s remarks also seem to indicate his predilection for increasing military spending to promote his “America First” strategy, which is contrary to his desire to end nation building.

The final takeaway stems from the issues absent from his remarks. The day before his speech, there was speculation that the president would discuss how to reform the UN, a topic him and Secretary-General António Guterres actually agree on. But he did not discuss any reforms. Similarly, as he openly criticized socialism and communism, and its devastating effects on Cuba, Venezuela, and the Soviet Union, he did not mention China, a leading power that is politically communist.

As the first opportunity to address the international community as a leader, the president did what he did best: threaten force without encouraging alliances and cooperation. Instead of taking this opportunity to promote a grand strategy of great power balancing, the president instead opted for using the rhetoric of realpolitik, stating that the United States will be “guided by outcomes, not ideology.” Yet, outcomes are almost always influenced by ideology. In other words, the world heard what it expected to hear from President Trump: a collection of contrary statements and a weak road map for world peace.

Sahar Khan, Ph.D. is a Visiting Postdoctoral Research Fellow at the Cato Institute.