Here Are the Facts about the Iran Deal 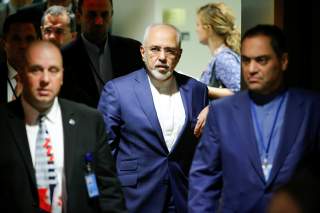 October 15 is significant because, by law, President Donald Trump must submit a formal determination to the U.S. Congress that “Iran is transparently, verifiably, and fully implementing the agreement” formally named the Joint Comprehensive Plan of Action (JCPOA). President Trump, as he has twice before, will also have to decide whether continuing Iran’s sanctions relief is “vital” to the U.S. national security interest.

In the event Trump either chooses to decertify Tehran’s compliance, concludes that more sanctions relief is not in America’s interest, or simply refuses to formally report to Congress, lawmakers will have the option of considering a snap-back of the U.S. secondary sanctions regime that helped bring the Iranians to the negotiating table.

Opponents of the JCPOA can read a calendar and understand the current political environment in Washington, and it’s quite advantageous to them. In Trump, the anti-JCPOA community has access to a president who has already signed two certifications through gritted teeth and has also established a separate White House-driven review process to search for a way to back away from the deal. Just last week, U.S. Ambassador to the UN Nikki Haley all but previewed the administration’s potential talking points in the event President Trump refuses to confirm Iranian implementation next month.

Those fearful of Iran who relentlessly criticize the JCPOA—many of whom never liked the idea of talking with the Iranians in the first place—have been inundating the White House for months with exaggerated, hyper-partisan rhetoric about how bad the deal is. All the while, these same people continue to dangerously misrepresent how easy reassembling the multilateral Iran sanctions regime would be after the U.S. walked away from the agreement.

The truth, however, is that the deal is not as valueless as its critics claim, nor will re-assembling European, Chinese, and Russian support for a new multilateral sanctions regime after the JCPOA is abolished be as simple as they assume––in fact, there is a general consensus among experts that concentrate on U.S.-European relations that it’s impossible.

If one puts the politics aside and focuses exclusively on the facts, President Trump will have a much better chance of making a certification decision based on evidence rather than ideology.

Enriched Uranium Stockpiles without the JCPOA

Iran was enriching as much uranium as it wanted, to an ever higher enrichment quality, while producing and stockpiling centrifuges outside of the International Atomic Energy Agency’s (IAEA) supervision. The last IAEA report on Iran’s nuclear program, before the Iran-P5+1 diplomacy began, described Tehran as possessing more than 372 kg of 20 percent enriched uranium. Iran’s stockpile of low enriched uranium was assessed to be at slightly more than 9,700 kg, a quantity so large that private nuclear weapons inspectors predicted Tehran was only two or three months from nuclear breakout.

Enriched Uranium Stockpiles with the JCPOA

Iran has zero kg of 20 percent enriched uranium and indeed is prohibited from enriching uranium above 3.67 percent for fifteen years. Fully 98 percent of Iran’s entire enriched uranium stockpile has been shipped overseas or diluted, pushing its nuclear breakout time to a year. In other words, the 9,700 kg Iran possessed in September 2013 at the present time is capped at 300 kg—and will continue to be capped at that quantity until 2030.

Centrifuges and the Production of Enriched Uranium without the JCPOA

Iran’s centrifuge capacity was clocked at roughly 20,000 machines, none of which were being monitored by the IAEA. Iranian physicists were also researching, testing and installing more advanced centrifuge machines that would spin uranium at a faster rate, thereby increasing their stockpile in a shorter period of time. There were no limits on what Tehran could do in this field.

Centrifuges and the Production of Enriched Uranium with the JCPOA

Iran cannot exceed 5,060 IR-1 centrifuges in its Natanz plant for ten years and will only be allowed to replace broken machines with the IR-1 variety, the least sophisticated of the bunch. The reason this is important is because these very mechanisms restrict—and indeed prevent—Tehran from installing faster machines that can churn out enriched uranium more quickly. Iran cannot go above 1,044 IR-1 centrifuges in its Fordow enrichment plant for fifteen years, and no enrichment or enrichment research can occur in Fordow during that time.

The IAEA didn’t operate on Iranian soil, and the agency was extremely dependent on individual intelligence services for information about Tehran’s nuclear progress. There was no daily access to Iran’s main Natanz or Fordow enrichment facilities. IAEA arrangements centered on biweekly reviews of videotapes at Natanz and Fordow, but no monitoring whatsoever over the country’s centrifuge manufacturing plants or uranium mines. Neither was there a permanent IAEA facility within Iran’s borders.

IAEA inspectors are now permitted daily access to Iran’s declared nuclear facilities and can request access to any undeclared facility if inspectors have reason to believe something prohibited is taking place. Indeed, daily IAEA inspections in Iran have nearly doubled in the last four years. In 2013, the agency conducted a little more than 200 inspections. In 2014, when negotiations between the P5+1 and Iran were in full swing, that number increased to more than 350. In 2016, the number of visits reached 402, actual statistics that directly contradict Amb. Nikki Haley’s baseless and fact-free opinion that the international community has weak insight into what Iran is and is not doing.

Thanks to the dispute resolution mechanism under the JCPOA, the United States and its European partners can force Iran to comply with the IAEA through the Joint Commission. This means the Iranians will no longer be able to tie up the international community in knots through endless negotiations over technical points; which facilities and what activities the IAEA will have access to; whether those inspections will be supervised by Iranian personnel; and how long the inspections will take place.

Military Dimensions of Iran's Nuclear Program without the JCPOA

Tehran repeatedly refused to cooperate with the IAEA’s efforts to investigate Iran’s past nuclear work. Negotiating access to the Parchin facility—where past nuclear research was suspected of being conducted—strung out for years, during which the Iranian government either outright resisted the agency’s requests or tied up the process through tedious negotiations.

Military Dimensions of Iran's Nuclear Program with the JCPOA

Iran was required to provide the IAEA with information it requested with respect to past military dimensions in its nuclear work at Parchin before it received a dime of economic sanctions relief—a requirement that the Iranians met in December 2015 according to the IAEA Director Genera’s report to the Board of Governors.

Are there problems with the Iran nuclear agreement, as some Trump administration officials and hawkish Iran analysts have stated repeatedly for the last two years? Absolutely.

Most of these nuclear restrictions are temporary and will eventually go away. Tehran can begin installing more and faster centrifuges starting in 2025. In 2030, Iranian scientists will once again be allowed to produce as much enriched uranium as they would like. Twenty percent enrichment will no longer be prohibited at that time. By 2030, the IAEA will no longer have the ability to force Iran’s cooperation on inspection requests through special mechanisms contained in the agreement.

There is also a legitimate concern among JCPOA skeptics that Tehran was afforded economic sanctions relief in a lump sum on the front-end rather than a phased release of its frozen assets over a longer period of time.

And that is exactly why the United States would be foolish to throw away the accord: Iran has already received much of what it wants, so why let them off the inspections hook?

All of these sunsets are far below what can be called a perfect diplomatic accord, and indeed the Trump administration should prepare for the day when the agreement’s many restrictions expire. In fact, the administration should exploit any opening to extract from the Iranians a follow-on agreement that extends the JCPOA for even longer, a heavy lift to be sure.

However, if President Trump were to decertify Iranian compliance—despite all evidence to the contrary—or rule that continued nuclear-related economic sanctions relief to Tehran was no longer in the U.S. national security interest—he will have taken a gargantuan risk of giving Iran an excuse to return to the bad old days when its nuclear program was unimpeded, unmonitored, and in the clear to accelerate as quickly as Tehran was technologically able. And he would have done so against the wishes of Washington’s P5+1 allies, those who would need to stand with us once again to re-build any serious sanctions regime—all of whom will be highly unlikely to do so if President Trump withdraws on flimsy evidence.

One does not have to like the JCPOA or respect the concessions extracted from Iran—there’s much to be desired. But maintaining the current arrangement is a far better deal for the U.S. than throwing it—and all of the inspections and access the IAEA has managed to receive—away.