Here's How America Can Really Make the Iran Deal Better 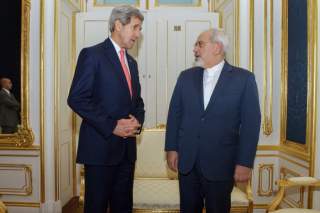 Critics of the nuclear agreement with Iran call for a “better deal.” But the way to get a better deal is not for Congress to reject the one negotiated by the Obama administration. It is to strengthen the existing deal by supplementing it with U.S. policies designed to promote strict compliance, counter Tehran’s destabilizing regional activities, and prevent a nuclear-armed Iran over the long term.

Opponents of the agreement maintain that, following Congressional rejection, the United States could persuade the international community to ratchet up sanctions dramatically and force the Iranians to accept a much better agreement.

But a renegotiated better deal is a pipe dream. With key U.S. allies and other members of the international sanctions coalition blaming Washington for walking away from an acceptable deal, it would be exceedingly difficult even to ensure faithful implementation of existing sanctions— and virtually impossible to increase sanctions enough to compel Iran to make the major concessions the critics call for.

Following a Congressional “no” vote and a successful override of the president’s veto by a two-thirds majority in both houses, Obama would be barred from fulfilling the commitment under the deal to suspend U.S. sanctions, removing Iran’s main incentive to meet its commitment to reduce its nuclear capabilities and accept rigorous monitoring measures. No longer bound even by the constraints of the November 2013 interim deal, the Iranians would be free to ramp up their enrichment capacity and shrink the time it would take them to build a nuclear weapon.

The consequences of rejection would probably not be as dire or sudden as some proponents of the deal claim. Sanctions would certainly erode over time, but they would not collapse overnight. Iran would build up its nuclear capacity, but it may do so gradually to avoid providing a justification for stronger sanctions or the use of force. Tensions would rise, but a military confrontation would not be inevitable and would depend on the pace and direction of Iran’s nuclear program.

So, the sky would not fall. But neither would conditions exist for resuming talks and getting a better deal.

The existing deal has many strong features—including tight restrictions on enrichment capacity and plutonium production for 15 years, rigorous monitoring arrangements for the entire uranium enrichment supply chain, a dispute resolution mechanism for ensuring IAEA access to suspect sites anywhere in Iran, and an unprecedented procedure for automatically restoring sanctions in the event of an Iranian violation.

But like any negotiated outcome, the nuclear deal is a product of compromises. Inevitably it falls short of ideal outcomes in some notable respects. For example, it would have been better for restrictions on enrichment to last much longer than 15 years. Moreover, with its singular focus on the immediate imperative of blocking the acquisition of nuclear arms, it does not seek to tackle other challenges posed by Iran, particularly Tehran’s regional designs.

So, how best to overcome the agreement’s imperfections and address challenges not covered by the deal? The answer is not to try to renegotiate the current agreement. It is to supplement it with policies that can bolster its overall contribution to the security interests of the United States and its regional partners.

First, the administration should actively build international support for rigorous enforcement of compliance, working with key partners to establish contingency plans for the coordinated re-imposition of sanctions in the event of Iranian violations, including appropriate responses to both small and major infractions.

Second, to counter possible Iranian attempts to delay IAEA access to suspect facilities and conceal incriminating evidence from inspectors, the United States should share intelligence with the IAEA and other states on suspicious activities and on any Iranian efforts to sanitize sites before the arrival of inspectors, and should be prepared to go directly to the Security Council, without waiting for IAEA access, when warranted by the seriousness and time-urgency of illicit Iranian behavior.

Third, in response to unresolved concerns about Iran’s past nuclear work, the United States should make detection of Iranian weaponization activities a top U.S. intelligence priority, and should encourage the IAEA to keep the weaponization issue under review as it considers the “broader conclusion” about the nature of Tehran’s nuclear program that will provide the basis for a future Congressional decision on terminating, not just suspending, U.S. sanctions.

Fourth, Washington should press potential supplier governments to comply with renewed Security Council prohibitions on transferring major conventional weapons and ballistic missile technology to Iran, step up efforts to interdict illicit shipments to and from Iran, and strengthen the conventional military and missile defense capabilities of Israel and Gulf Arab partners to prevent an adverse shift in the regional military balance.

Fifth, to deter Iran from deciding to build nuclear arms once restrictions on its nuclear capabilities expire after 15 years, U.S. presidents, with the formal endorsement of Congress, should publicly commit the United States to preventing Iran from acquiring nuclear weapons and to using any means necessary, including military force, to enforce that commitment. In that connection, Washington should identify privately to Tehran activities that—even if permitted by the nuclear agreement after 15 years—have no plausible peaceful justification in Iran and would be regarded as evidence that Iran had decided to pursue nuclear weapons (e.g., production of highly enriched uranium or separated plutonium).

Sixth, while the United States and its regional partners should welcome any genuine Iranian interest in resolving disputes diplomatically, they should remain vigilant against Iran’s use of funds released from restricted overseas accounts to arm, train, and bankroll its proxies, and they should mobilize their collective economic resources and military capabilities—which are far greater than Iran’s—in a coordinated strategy to thwart any Iranian efforts to destabilize and dominate the region. A strong U.S. commitment to remain engaged militarily and diplomatically in the region will be indispensable in re-building the region’s confidence in U.S. leadership and in reassuring our partners that the nuclear deal will not adversely affect their interests.

None of these supplemental policies are constrained by the nuclear agreement with Iran, and none require its renegotiation. They can help overcome the deal’s shortcomings and address challenges not covered by the deal—and they can do so without running the serious risks of what would be a futile effort to negotiate the “better deal” the critics advocate.

Instead of rejecting the agreement now on the table, Congress should work with the administration on a range of supplemental policies that, together with the solid foundation provided by the deal itself, can prevent Iran from becoming a nuclear-armed state for the foreseeable future and serve the security interests of the United States and its regional partners.

Robert Einhorn is a senior fellow at the Brooking Institution and a former member of the U.S. Iran negotiating team. This op-ed is based on a recent Brookings essay: http://www.brookings.edu/research/reports2/2015/08/iran-nuclear-deal-battleground-issues-einhorn.