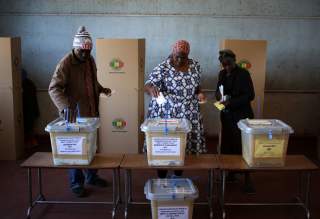 The people of Zimbabwe head to the polls today on July 30, 2018, to cast their votes in the first election after the abrupt end to the almost forty-year rule of Robert Mugabe, the country's only ruler since independence in 1980. The two major candidates to watch are Mugabe's former vice president and now leader of the Zimbabwe African National Union-Patriotic Front (ZANU-PF) Emerson Mnangagwa, the replacement for the late opposition leader Morgan Tsvangirai and the candidate for the Movement for Democratic Change—Tsvangirai (MDC-T), Nelson Chamisa.

The drama that characterized the removal of Mugabe from office this past November has continued into the election campaign with threats, counter-threats and a recent explosion during a ZANU-PF campaign rally. The ubiquity of China in this entire political drama is an understatement. Over the Mugabe years, he persistently reminded the West of its exploitative colonial past on the continent while working in soundbites to extol China’s efforts in Africa. As he faced Western sanctions, Mugabe’s “Look East” policy fully embraced China. Those sanctions had been aimed at dissuading democratic decay, encouraging economic reforms and curbing the excesses of his regime in a state once called the breadbasket of Africa.

Ironically, the military deposition of Mugabe had alleged Chinese influence, as General Chiwenga’s visit to China, days before he led the internal uprising against Mugabe, later put Beijing on the defensive. Therefore it is not surprising that Mnangagwa and the ZANU-PF have been visibly and staunchly pro-China, and Mnangagwa visited China after his swearing-in as interim president. However, Chamisa has threatened to expel Chinese investors out of Zimbabwe if he wins, accusing them of “asset-stripping the resources of the country.” Interestingly, the use of anti-Chinese rhetoric to gin up popular support for the MDC-T platform was employed successfully in neighboring Zambia, where the late Michael Sata rode an anti-Chinese populist wave to electoral victory in their 2011 election. Will Nelson Chamisa be the next African president to exploit dislike of the Chinese for electoral gain? Will he hence prove the efficacy of anti-Chinese populism in African elections, intriguingly, in a post-Mugabe Zimbabwe?

Presently in Zimbabwe’s election, it’s definitely the economy, stupid. After years of personal rule accompanied by Western sanctions, the Zimbabwean economy is reeling from recent hyperinflation rates, dwindled rates of foreign direct investments (mainly from the West), and arguably abysmal rates of unemployment, especially among the youth. This southern African state needs all the global economic help it can get. Zimbabwe’s dire development scenario makes Chamisa’s anti-China card problematic. Even if he intends to revert his anti-China stance to doing business with the Chinese after his electoral victory (as Sata did in 2011), investors may be spooked by such campaign rhetoric and a promise of heavy-handedness in a country that has long been considered politically unstable.

Additionally, the MDC-T frontrunner may be running against the popular tide that sees China as a significant economic influence in Zimbabwe, according to a 2016 Afrobarometer survey. In that same survey, 41 percent of the Zimbabwean respondents weighed investment in infrastructure and business as the most prominent factors attributable to China's positive image. Areas of economic engagement between the two states include infrastructure, mining and transport, hence making this populist call seem more like rather unwelcome political rhetoric than reflective of reality.

The MDC-T’s presidential candidate is likely playing the anti-China card by banking on the unemployed, disenchanted, the over 60 percent electorates who believe the country is going in the wrong direction, according to Zimbabwe’s recent Afrobarometer pre-election survey. However, a threat to eject Chinese investors rather than raising internal policy prescriptions will not help resolve Zimbabwe’s deep economic maladies, but rather foment further uncertainties for a vulnerable economy. For instance, a recent research report on Chinese investment in the agriculture sectors in Zimbabwe, Zambia, and Tanzania reveals that in spite of strong local political connections by Chinese businesses, they are not above the law, and are often kept in check by existing indigenization policies.

Despite the generally favorable popular opinion of China held by Zimbabweans in surveys, and years of pro-China anecdotes from Beijing's comrade-cheerleader-in-chief—Robert Mugabe—and his ruling elites, China should by now be prepared for several waves of anti-Chinese political propaganda that could come from anywhere. After decades of working with different generations of African ruling regimes and elites, from those with a  pre-independence ideological character to those with a post-independence pragmatic approach, Beijing gradually appears committed to expediency. This consists of the combination of pragmatic engagements with Africa's development realities such as the provision of infrastructure, and an insistence on rhetorical devices like "business is business," "noninterference," and "non-conditional assistance." Thus, China and its various operatives offer African masses a response to their development needs while presenting to the ruling political elites an "on-task and non-meddling development partner." This method of Chinese engagement may weaken Mr. Chamisa's threat and render it unpopular. This is even more probable with Trump's America-First agenda, which has enabled China to undoubtedly remain a significant factor in countries like Zimbabwe, and throughout Africa in general.

However, Chamisa’s anti-Chinese threat cannot be wholly discounted. When Sata adopted his anti-China stance in Zambia’s election, he focused on Chinese activities in Zambia’s copper industry. He did this because by then those activities had then registered some disaffection among the local population, making the Chinese presence in Zambia a politically viable subject. In the case of Zimbabwe, the diamond industry could be the trigger for anti-Chinese sentiment as Chinese firms have been linked to mismanagement in the diamond and mining industry in general.

Whether this and other anti-Beijing opportunities can be harnessed to settle political scores in today's elections will depend on the ability of each side to highlight China's critical roles in either improving or impeding the well-being of Zimbabweans who deserve an economic respite after decades of uncertainty helmed by Mugabe and the ZANU-PF. With established economic and diplomatic interests, China may have been pro-Mugabe but is certainly prepared to be pro-Chamisa or pro-Mnangagwa after the election—anti-China populism or not. Such expediency shows that political rhetoric is checked by economic reality.

Richard Aidoo, Ph.D. is an Associate Professor of Politics and the Assistant Dean at Edwards College of Humanities and Fine Arts, Coastal Carolina University.