Here's How to Deal with the Khashoggi Incident 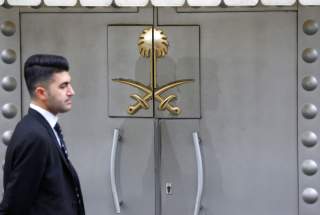 Now that Saudi Arabia has reportedly acknowledged that dissident journalist Jamal Khashoggi was killed in a Saudi consulate in Turkey, congressional calls for sanctions on the Kingdom are likely to get louder, putting increased pressure on the White House to act. However, while Khashoggi’s brazen murder makes it difficult for the United States to look the other way, sanctioning the Saudis would be a mistake.

Saudi Arabia has already promised to retaliate disproportionately against any sanctions and oil markets would, of course, be the first casualty of economic warfare with the Kingdom. Some analysts predict oil could spike as high as $400 a barrel from its current price of $72 in the event of a tit-for-tat. However, the most serious long-term impact of sanctions would be in upending existing economic relationships, and on the dollar itself.

In an op-ed in Al Arabiya, Saudi journalist Turki Aldakhil discussed some of the thirty proposed measures floated among the Kingdom’s leadership for how to respond to potential sanctions from America. Perhaps the most worrying of these was “an oil barrel may be priced in a different currency, Chinese yuan, perhaps, instead of the dollar.”

In threatening to deviate from the longstanding policy to price its oil in dollars, which enshrined the dollar’s role as the de-facto currency of commodity markets, the Saudis are looking to hit the United States where it hurts. Naming the yuan is a nod to China’s recent attempts to both gain broader acceptance for its currency as an international medium of exchange and to launch oil futures priced in yuan. As the largest importer of oil in the world, China already has some heft in the markets, but the decision of a critical producer like Saudi Arabia to move away from the dollar could have a cascade effect that opens the door for other players to defect.

The dollar’s status as the global reserve currency forms the nexus of U.S. economic power, gives U.S. sanctions their bite, and underpins America’s ability to dictate to firms and financial institutions around the world. Any attempt to undermine it would have broad negative consequences both for America’s economic well being and its ability to influence economic norms and rule-setting around the world.

If Saudi Arabia were the only aggrieved nation, sanctioning it would be manageable. However, over the past two decades, America has aggressively used sanctions and other forms of economic warfare against numerous countries, including Russia, Iran, North Korea, and Turkey. Secondary sanctions, which punish companies in non-target countries that do business with a sanctioned entity by cutting them out of the U.S. market, are having an impact in the European Union and China.

Policy-makers have for a long time erroneously viewed sanctions as a cheap way to punish misbehaving nations and compel compliance with U.S. policy, but the result has been festering dissatisfaction with America’s outsized economic power among both friends and enemies. China and Russia have both worked to develop alternatives to U.S.-dominated economic institutions, and even U.S. European allies are expressing concern about America’s ability to unilaterally punish other nations economically. This has manifested in calls to build an alternative to the international SWIFT interbank messaging system—which the United States has used as a form of leverage in sanctions policy—that would be outside American control.

Adding Saudi Arabia to the list of aggrieved partners would not be wise. The Kingdom would be able to find alternative economic partners should America seek to apply the screws, and its regional clout and importance in the oil markets would make it hard to isolate. Transitioning away from the dollar is costly and inconvenient, and since the Saudis have generally been comfortable with the U.S.-led economic order, they would be unlikely to abandon it without a pressing impetus. Hence, providing this jolt by applying sanctions to their economy would help destroy a major pillar of the dollar’s dominance.

Given the shameless nature of Khashoggi’s execution, the United States will likely have to take some action. However, the punishment should be political in nature, just as the murder itself was.

The United States could punish the Saudi’s regime’s recklessness by withdrawing its support for the war in Yemen, a step long overdue given the equally barbaric Saudi behavior in that conflict. It could also undertake a broader assessment of whether Saudi Arabia is a sufficiently valuable ally for America to continue to commit itself to defending the regime and its interests in the Middle East. What it should not do is dynamite a crucial economic relationship, and launch a cycle of retaliation that would upend the global markets and ultimately backfire on the United States.

Enea Gjoza is a fellow at Defense Priorities and a graduate of the Harvard Kennedy School of Government.