Here's How France and Germany Could Have a Joint Bomb 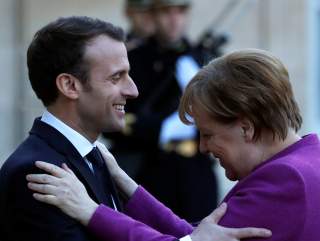 Strategic thinkers and planners have the goal of securing the enduring existence of Europe’s freedom so that, as a former German head of state, Joachim Gauck, vehemently reminded his people, “others, with very different worldviews, cannot lay hands on our way of life, indeed, on our very freedom.” This is precisely why anticipatory planning in today’s strategic environment is essential and, in turn, raises the following question: how will the Europeans effectively guarantee the ultimate protection of their vital interests in the future when the foundations of the strategic status quo are changing so drastically?

In particular, for Germany’s strategic assessment of the international environment, it is absolutely crucial to understand which position the United States adopts in regard to core questions of world order and global military security. The repeated and public questioning of America’s commitment to the North Atlantic Treaty Organization’s article 5 by Donald Trump has more than ever before shaken its allies’ belief in NATO’s credibility and the United States’ global security guarantees. Russia lost its “strategic depth” in 1991 when the Warsaw Pact dissolved. But Putin, as he has made clear time and again, will not accept this outcome as history’s final verdict. A more-than-ever ambitious China views (and presents) itself as Asia’s hegemon, increasingly unwilling to budge and bend to America’s power and possibly sleepwalking into a classic war of power transition in the South China Sea. Overall, the international status quo, which the United States has critically shaped in the last three decades and which has guaranteed Germany’s external security, is undergoing fundamental changes. It is unclear where they will leave Germany.

It is precisely for these reasons that Berlin now must take charge to protect the culture of its Western way of life and indeed to help sustain the order of the ‘free world,’ however modestly. NATO remains the most (powerful and) appropriate framework, if adapted, for a German-French initiative for a joint nuclear deterrent. In all of this, accurately perceiving and judging U.S. intentions remains fundamental for Germany’s grand strategy-making to draw the right conclusions in the present with a clear view to the future.

Currently, too many German officials still assume that the White House's generals will ultimately be successful in ushering the President back on the historic transatlantic path. To some extent, this has happened (Trump did not decline to attend NATO's summits). Moreover, Congress is still fiercely committed to limit the President's advances towards Russia. However, the (German) belief that American strategy can be made without the President (or by circumventing him) rests on very shaky ground. Neither does such a belief fully understand Trump's longstanding (transactional) aversion to the burden of having NATO allies; nor is it possible to alter the President's ego and his worldview by constitutional means. The generals may well have told him that, as a sea power, America does need an allied Europe to freely operate militarily on the Atlantic. They may also have informed him that the United States needs European bases to project its military power into the Middle East and Africa. Finally, Trump might know that the U.S. businesses have invested some $500 billion in Europe which may be worthwhile protecting. But, the implied conclusion that these reasons alone will lead Trump to sustain and continue along that transatlantic path to which Germans very much have gotten used to (as if that was the end of history) is altogether spurious or, more modestly, uncertain.

In addition, there can be few doubts that America, at the latest since Obama, sees Asia as the largest and still growing market in the world with ever-increasing importance for its trade. It will, therefore, station some 60 percent of its military power in this region by 2020. A confrontation with China, not altogether unlikely, further exacerbates this undeniable movement of U.S. military priorities away from Europe. One only needs to remember how 9/11 triggered an extremely powerful strategic distraction away from Europe when we aim to anticipate what a U.S.-China conflagration in the South China Sea would imply for Europe's strategic protection. Also, strategists should keep in mind Mattis' straightforward answer in 2017 that America is unable to fight two wars at the same time. Finally, as if this weren't enough, recent NATO net assessments that were leaked to the public which revealed that the alliance would not be able to defend itself. All of these concerns underline the dangerous window of opportunity of which Russia would almost certainly take advantage if America was seriously involved in a (not so unlikely) East Asian war. Germany's security would be fundamentally at stake, with no reliable deterrent at hand to protect it.

Furthermore, America has existentially supported ‘the West’ twice, in 1917 and 1941, three and two years respectively after those wars had begun in Europe. This pattern is not unalterable, though Trump’s isolationism may—in times of conflict—speak more to a changing American demographic polity than Europe’s transatlanticists will want to admit.

In other words, the policies emanating from American intentions will ultimately be of a pro-European nature, if dangerously delayed. Nonetheless, the scope of discretion that has always characterized the nature of NATO’s article 5 has been stretched by Trump to a level that has seen the alliance’s credibility at its lowest since 1949. While this disregard for NATO’s reputational costs (to its enemies’ benefits) may reflect his transactional approach, it has already helped evaporate the effects of preventive deterrence, conventional and nuclear, vis-à-vis Russia. It has also heavily and publicly undermined the cohesion and, thus, the strength of ‘the West’ as such. And, fundamentally, it has, without further strategic consultation within NATO, exposed Germany’s military vulnerability right in front of Putin’s eyes and his cutting-edge military.

Today, Germany must take the initiative and rebalance the politics of article 5. In fact, this should be its overarching strategic priority. The threat perception regarding Russia is the glue that binds Europeans together. Tellingly, not only have leading Polish policymakers publicly endorsed a massive increase in German hard power, they have also indicated their agreement to a European nuclear force.

Germany's so-called nuclear participation as NATO member is very important as a means of consultation about strategic questions; though, as such participation only applies to short-range—and thus tactical nuclear weapons—it does not provide any deterrent effects. Therefore, in light of Trump's foreseeably unchanging approach, Germany must undertake an overall policy change. To strengthen NATO's credibility again and safeguard its strategic security, it needs to step forward and make the establishment of a European nuclear force the centerpiece of a new strategic planning process. This would not, as it was suggested by the French in the past, be aimed at financing their force de frappe, but rather Germany would now have equal standing in joint nuclear decision-making and, quite literally, one hand at the nuclear trigger.

Thereby, Berlin would powerfully address, within NATO, the strategic imponderabilities caused by the current U.S. President and his isolationist disregard for longstanding and very loyal, if weaker, allies. At the same time, such a new strategic policy is intended to signal to America that this is not an attempt to change the European Union into a NATO rival, rather it is meant to credibly strengthen NATO’s appearance to others, such as Russia. This would also help affect the dangerous misperception of a decaying West, unwilling to fight for its way of life, a position widely held in and by China.

Looking further into the future, there is the ultimate question of whether Trump will succeed in convincing his electorate that China is a bigger enemy to America than Russia and that, in order to divide these two (unequal) allies, America needs to pursue a reversal of the strategy it pursued in the early 1970s. This would consequently require a rapprochement with Moscow, largely on Putin’s terms. A French-German nuclear force would then prove its value as it would make it much harder for Putin to blackmail the (weaker) Europeans into his, quite predictable, terms for such a rapprochement.

Dr. Maximilian Terhalle is currently Senior Research Fellow at the War Studies Department of King’s College London, an Adjunct Professor at Potsdam University and Associate Professor of Strategic Studies at Winchester University (UK). His latest publications are entitled “Strategy and Strategic Studies” (2018) and “The Transition of Global Order” (2017). He undertakes research that aims to synthesize the study of ‘Strategic Studies’ with that of world order.

This is a revised version of an op-ed that the author wrote for the “Frankfurter Allgemeine Zeitung” (November 15, 2017).