Here's How to Stop North Korea from Cheating on Denuclearization 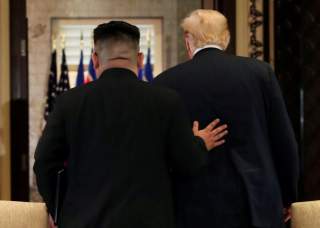 Now that North Korea has agreed at the Singapore summit to work towards denuclearization certain elements will need to be in any nuclear deal for the agreement to be effective. For example, without a strong snapback provision, any deal might not be worth the paper it is written on.

Despite North Korean leader Kim Jong-un’s more recent suggestions that he is open to denuclearizing if the United States were to provide security guarantees for the regime, North Korea has a significantly longer history of arguing that it would never do so. This is compounded by North Korea’s spotty record of following through on prior deals. When the Clinton administration concluded the Agreed Framework in the 1990s, it only covered North Korea’s plutonium-based nuclear program. While North Korea kept its end of the bargain on plutonium, it covertly pursued a highly enriched uranium program that was not explicitly covered. After Kim Jong-un came to power, the United States and North Korea concluded the Leap Day Agreement, which called for a North Korean moratorium on nuclear and missile tests and for the United States to provide food aid. Shortly after reaching a deal, North Korea conducted a satellite launch. Furthermore, the recent destruction of North Korea’s nuclear test tunnels may have been only for show.

Even if North Korea’s willingness to denuclearize this time is sincere, that does not mean it won’t seek to maintain a nuclear option for the future. In the case of Iran, the real story behind the recent Israeli intelligence coup was not that Iran had lied about the nature of its program prior to the Iran Deal (known as the JCOPA), but that it had retained the research needed to restart its program.

Whether North Korea chooses the Iran route of keeping detailed plans or stows away a few undeclared devices, any agreement on denuclearization should build in the ability to quickly re-impose sanctions if the process unravels. Also, this is especially important if the process takes upwards of fifteen years, as some have suggested. For this, U.S. negotiators need to look no further than the Iran nuclear deal or the Korea-United States Free Trade Agreement (KORUS FTA) for potential models that could be adapted for this purpose.

To ensure that Iran followed through on its commitments under the Iran Deal, the United States and its partners needed a tool to restore economic pressure on the regime if backsliding occurred. Under the JCOPA, if there are concerns that Iran is not fulfilling its commitments or any of the other parties are not meeting their commitments to Iran, there is a dispute resolution process. If the complaint cannot be resolved through negotiation in thirty days, the UN Security Council has thirty days to vote to continue lifting sanctions. If it does not actively vote to do so, the sanctions snap back into place. This ensures that no permanent member of the Security Council can protect Iran from renewed sanctions with a veto should a violation occur.

The KORUS FTA has a similar provision for trade in automobiles as that trade has long been a contentious issue in the U.S.-Korea economic relationship. For instance, U.S. auto producers have struggled to gain a foothold in the South Korean market despite prior agreements to address non-tariff barriers (NTBs). Because of concerns that future NTBs could similarly undermine the benefits of the FTA, a special dispute settlement process was put in place that would allow either party to re-impose their tariffs if future measures were found to have impaired or nullified the benefits of the agreement.

While the process under the KORUS FTA is longer than under the Iran nuclear deal, there are general principals in both agreements that would be beneficial in emulating for any snapback provision in a nuclear agreement with North Korea. There should be a process to confirm and resolve a violation of the agreement, but that process should be time-limited. Instead of removing sanctions on North Korea, the deal should suspend sanctions at least until complete dismantlement is verified—a process should not be able to be vetoed by other parties. Lastly, using the KORUS FTA as an example, the dispute process should address violations of the agreement, but also violations that would have the effect of impairing or nullifying the agreement.

In the early years of any agreement, trust will be lacking on both sides. While a successful dismantlement process could in time lead to mutual trust, that will depend on how North Korea reforms internally after denuclearization and how the relationship between North Korea, the United States, and South Korea evolves. But even in the best of circumstances, genuine trust will take years to develop. Therefore, a strong snapback provision will help build that trust and protect against North Korean backsliding.

Troy Stangarone is the Senior Director for Congressional Affairs and Trade at the Korea Economic Institute of America. The views expressed here are the author’s alone.

Image: U.S. President Donald Trump and North Korea's leader Kim Jong Un leave after signing documents that acknowledge the progress of the talks and pledge to keep momentum going, after their summit at the Capella Hotel on Sentosa island in Singapore June 12, 2018. REUTERS/Jonathan Ernst