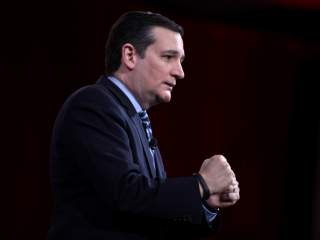 Senator Ted Cruz had a tightrope in front of him at last night’s CNN Republican debate, and he walked it well.

Cruz needed to turn in a strong performance without being too aggressive towards his fellow candidates. As Frank Luntz’s focus group of GOP voters revealed, debaters who grilled their opponents too harshly yielded negative sentiments. This was especially true of anyone targeting Donald Trump, who seems coated in one of the thickest applications of Teflon we’ve seen in modern politics.

Cruz has navigated the peril of Trump shrewdly, appearing side-by-side with him at an anti-Iran deal rally and playing into the mouthy mogul’s ego, while angling to displace him as the candidate of choice for populist conservatives. With Cruz having taken the lead in Iowa, this strategy seems to be working. And yet, despite Trump’s notorious dyspepsia at those who show him up, he had only good vibrations for Cruz last night. “I’ve gotten to know him over the past few days,” Trump said. “He has a wonderful temperament.” It was exactly what Cruz wanted to hear.

It was a real and at times raucous debate, and Cruz probably came off best, forcefully driving his points home while avoiding churlish eye-pokes. He bested Marco Rubio on immigration by invoking Ronald Reagan’s “A Time for Choosing” speech and saying Rubio “chose to stand with Barack Obama and Senator Chuck Schumer, and vote for amnesty.” When Rubio protested that Cruz had his own apostasies, the Texas senator delivered perhaps his best line of the night. Comparing his position to Rubio’s, Cruz said, was like “suggesting the firefighter and the arsonist have the same record at the scene of the fire.”

Rubio was better on other immigration clashes, but he may want to procure a fact-checker on foreign policy. The Florida senator claimed that Muammar Gaddafi relinquished his weapons of mass destruction because we invaded Iraq—not so; deposing Saddam almost derailed existing negotiations with Gaddafi. He also said our Sunni allies in the Middle East weren’t launching airstrikes against ISIS because “they have lost complete trust in this president”—actually, they’re too busy bombing Yemen, a war President Obama supports. Rubio was still sharp and incandescent last night, but he occasionally looked shaken.

Part of that was due to Senator Rand Paul, who seems to have decided that the pollsters, the consultants, the establishment and the image specialists can all go directly to hell, and who launched more missiles than the Ohio-class submarines Rubio mentioned. Paul grilled Rubio from a hawkish standpoint over the 2013 Gang of Eight immigration reform effort, and Donald Trump from a civil libertarian angle over his surmising that Bill Gates could help shut down the internet. When Chris Christie said he’d shoot down Russian planes in a no-fly zone if necessary, Paul acidly rejoined, “If you’re in favor of World War III, you have your candidate.” Overall, Paul did well, though I’m not sure his pugnacious approach will appeal to Republican voters who want a party unified against Hillary Clinton.

In any case, a slightly less hawkish alternative to the Rubio-Jeb-Fiorina foreign policy found voice in Cruz and Paul last night. Cruz toed this tightrope too, though sometimes it was unwieldy, as he made the case against arming the Syrian rebels and toppling Mideast dictatorships, then nonsensically promised to “carpet bomb” ISIS. Cruz was hit this week by a fusillade of criticism from neoconservatives like Bret Stephens, Max Boot and Stephen Hayes; expect another round to be fired soon.

Who else? Some commentators think Chris Christie had a strong performance, though I didn’t find him particularly memorable. He also seemed forever on the cusp of calling for the abolition of the U.S. Senate. If he thinks Cruz, Rubio and Paul are “too Washington” because they’re having a genuine debate, then maybe the Beltway has some redeeming qualities after all.

And then there’s Jeb, who finally seemed to wriggle his way from under Donald Trump’s thumb. “Donald, you’re not going to be able to insult your way to the presidency,” he asserted. It was a good line, but will it prove accurate?