Here's How Trump Could Strike Syria 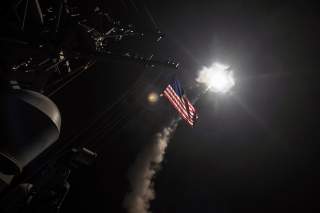 The United States, together with France and Great Britain, is considering launching a military strike against the Syrian government for an alleged chemical weapons attack on the town of Douma.

The three governments have promised to retaliate for the chemical attack on the Syrian rebels despite the fact that the UN Security Council is highly unlikely to sanction such an operation. Russia is almost certain to veto any resolution that would authorize military action. Meanwhile, the United States and Russia voted against each others’ Security Council resolutions on setting up inquiries on the chemical weapons attacks in Syria. Russia had also put forward a Security Council second resolution calling on the Organisation for the Prohibition of Chemical Weapons to send investigators to Douma—which was also vetoed.

Spat at the UN Security Council

“Regardless of the outcome of today’s voting session of UNSC we want to remind that yesterday Russia&Syria proposed to immediately bring #OPCW inspectors to the alleged site of CW attack in #EasternGhouta,” Dmitry Polyanskiy, Russia’s first deputy permanent representative to the UN stated in a tweet. “US,UK&FR can prove they want to establish truth by supporting this move.”

It was clear by press time that the UN Security Council would not adopt the Russian resolution, and it would seem that the Trump administration is leaning heavily towards the military option in conjunction with France and Britain in anycase. Indeed, U.S. Ambassador to the UN Nikki Haley indicated that the United States would respond to the chemical attacks in Syria—regardless of what happens in the Security Council.

“History will record this as the moment when the Security Council either discharged its duty or demonstrated its utter and complete failure to protect the people of Syria,” Haley told the UN Security Council. “Either way, the United States will respond.”

Haley did not specify how the United States would respond exactly, but President Trump’s rhetoric indicates that Washington is strongly considering a military option. Moreover, the president canceled a long planned trip to South America to deal with the situation in Syria.

“We’re making a decision as to what we do with respect to the horrible attack that was made near Damascus,” Trump said during a meeting with senior U.S. military leaders on April 9. “And it will be met, and it will be met forcefully. And when, I will not say, because I don’t like talking about the timing.”

France and Britain Enter the Fray

While the United States has the ability to act alone, the French and British are likely to join Washington in conducting an attack on Syria. If the chemical attack on Douma is confirmed, the British and French have promised to take coordinated action with the United States. “We must stand up against the use of chemical weapons in Syria,” British prime minister Theresa May said at a press conference in Sweden on May 9.

French president Emmanuel Macron said that his country would make the decision to strike at Syria in coordination with Britain and the United States in days. “The third element is the red lines defined by France. These red lines, which are shared by other powers, have nothing to do with the discussions taking place at the U.N. Security Council,” Macron said alongside Saudi Crown Prince Mohammed bin Salman, according to Reuters. “In this context, we will continue exchanges of technical and strategic information with our partners in particular Britain and America, and in the coming days we will announce our decision.”

Russia, which insists that the alleged chemical weapons attack is a sham, is reiterating its earlier warnings that it will not idly standby if their forces in Syria are attacked either intentionally or unintentionally. "Russia has warned US representatives, both publicly and via corresponding channels, including military ones, about serious consequences that might follow possible strikes [on Syria], if Russian citizens are hurt in such strikes, accidentally or not,” Russia’s Permanent Representative to the European Union Vladimir Chizhov said according to the state-owned TASS news agency.

Meanwhile, tensions in the region are heating up. Russian forces have been jamming signals from U.S. unmanned drone aircraft in recent weeks. Additionally, Reuters is reporting that a fully armed Russian warplane buzzed the French frigate Aquitaine. There are also unconfirmed rumors that some number of Russian forces have been placed on high alert in anticipation of a U.S. strike.

The United States, meanwhile, has moved the Arleigh Burke–class guided missile destroyer USS Donald Cook (DDG-75)—armed with Tomahawk cruise missiles—to the Eastern Mediterranean for what could be preparations for a strike. Additionally, the Harry S. Truman Carrier Strike Group (HSTCSG) will depart Norfolk the morning of April 11, for a regularly scheduled deployment that will take those ships to the Middle East.