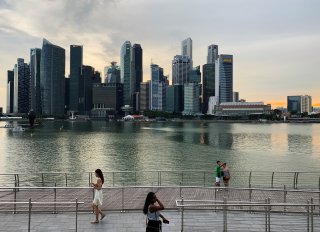 Even as Asian states compete in the military, economic, and technological domains, they remain as or more likely to bury the hatchet as to resort to arms. If they pursue mutually beneficial integration while incrementally resolving disputes, they will demonstrate that Asians can manage their own affairs without Western tutelage. This is a reminder of the poverty of European analogies to Asia’s reality. Though Asia has inherited many of its cartographic conflicts from the European colonial era, it does not follow that Asia must follow Western history or theory with its rigid conceptions of hierarchy and alliances. Many Western scholars hold unipolarity (such as Pax Britannica or Pax Americana) to be the most stable order, yet Asian history features nearly four thousand years of almost uninterrupted multipolarity across its vast geography of heterogeneous civilizations; Asians have mostly abided by the principle of “live and let live.” Europeans fear the security dilemma and balance of power dynamics that led to World War I, but Asians look askance at formal alliances within their region; they prefer the fluidity of multi-alignment. Unlike Europe a century ago, disputes across Asia are not linked by any mutual assistance treaty; each can be treated individually, and a conflict in one does not mean a chain reaction that destabilizes the whole region. 1914 Europe is therefore not the best template for Asia in 2020.

THOUGH ASIA’S geopolitical mood has shifted in a more confrontational direction, regional powers wisely continue to prioritize stability over warfare. But one cannot be glib about Asia’s conflict formations. Until they are formally settled, they are very much unsettled.

The question facing Asia is whether a settlement can be achieved without conflict. China’s strategy to date has been to pursue favorable settlements by modifying ground realities without provoking a military response. Whether by stealth action, intimidation, or coercion, it has been working. But as Asian powers stand up to China, the calculus must shift. As China comes to accept the durability of Asia’s multipolarity, it may also accept a diplomatic settlement to disputes it is far less likely to win as time goes on. In other words, China can either have settlement on agreeable terms, or risk conflict followed by settlements not to its liking. Imperial Japan was the last great power to assert regional hegemony, with self-destructive consequences that are a lesson for any future would-be hegemon of Asia. China should quit provoking while it is still ahead.

Asia’s leaders must seize this opportunity for a multi-step regional grand bargain that puts collective peace above individual pride. It is particularly Asia’s next generation that has a golden opportunity to break from past patterns of complacency and mental frames that put slavish nationalism over collective pragmatism. As Henry Kissinger put it in his treatise on the post-Napoleonic order in Europe, “Each generation is permitted only one effort of abstraction; it can attempt only one interpretation and a single experiment, for it is its own subject.”

Today’s Asian youth have largely grown up with greater material comfort and international exposure than previous generations. Many have studied abroad, intermarried, and learned each other’s languages at an unprecedented scale. They largely view climate change and pandemics as a greater threat to regional stability than inter-state military conflict. South Koreans strongly favor reunification, and youth across China, Japan, and South Korea are more favorably predisposed towards each other than the elderly who have wartime memories. They are a very important pro-peace constituency and should be utilized as such. There is, therefore, a tragic banality to watching junior civil servants adopt the mindsets and tropes of more nationalistic elders who slip so easily into the vocabulary of a “new Cold War” or “new era of great power competition.” Once idealistic young professionals get molded by older bureaucratic reflexes. It would be a pity if their fate is merely to relapse into the old ways of a fading and uncreative generation.

There is another way. Asians can evolve beyond cycles of rivalry and conflict if they accept both the inevitability and virtue of multi-polarity, devise processes for permanent conflict settlement, and embed these mechanisms in a collective Asian strategic culture and robust regional institutions. Asians have tasted the benefits of three decades of stability and prosperity, and know that a peaceful concert of Asian powers could guarantee several more. They tacitly agree that their tensions are better resolved unfairly than violently and that they each face more pressing economic, demographic, and environmental challenges. The price any of them pays now to settle their map is much smaller than what costs that war would impose on all of them later.

Parag Khanna is Founder and Managing Partner of FutureMap, a data and scenario based strategic advisory firm. His most recent books include The Future is Asian: Commerce, Conflict, and Culture in the 21st Century (2019) and Connectography: Mapping the Future of Global Civilization (2016).