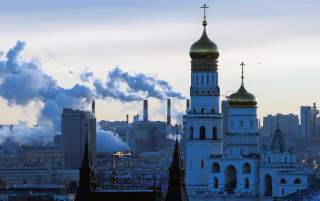 Is there any way to resolve the deadlock over Ukraine? From Moscow’s perspective, force might be the only feasible way to break the current impasse in Ukraine, according to Andranik Migranyan, a professor of international politics at the Moscow State Institute of International Relations, which is run by the Ministry of Foreign Affairs of Russia. Migranyan made clear that this is his personal view. He suggested that this turn of events may be more probable under the Trump Administration, which, unlike the Obama Administration, has opted to approve supplying Ukraine with lethal arms.

“Only the use of force, nothing else can solve the problem,” Migranyan told an audience at the Center for the National Interest during a lunchtime panel on January 11.

According to Migranyan—who is well connected at the highest levels of the Russian government—the dominant view among the Moscow elite is that the Minsk agreements are not working. Kiev has no intention of honoring its part of the bargain and the problem is only exacerbated by Washington’s decision to arm the Ukrainian government. Thus, for Russia, escalation of the conflict might be the only real option.

Russia, as Migranyan pointed out, has much higher stakes in Ukraine than the United States does. Ukraine—because of its geographic location—is strategically vital to Russia. Moreover, the Russia and Ukraine have cultural, ethnic, economic, linguistic and religious ties that go back centuries. Migranyan further noted that Russian civilization itself emerged from the Kievan Rus, the heart of which lay in what is now an independent Ukraine. “Ukraine is an existential problem for Russia and Russia will never let Ukraine to be part of NATO or any other bloc,” Migranyan said. “Ukraine is in the heart of Russia.”

According to him, there are three preconditions that must be met for there to be peace in Ukraine. The first is Ukraine will not be part of any alliance structure that is hostile to Moscow. The second is that Kiev must allow increased autonomy for its regions. The third is that Russian speakers in Ukraine must be allowed to learn and speak Russian—and learn about their culture despite the protestation of Ukrainian nationalists.

Russia, according to Migranyan, would prefer to see to Ukraine maintain its territorial integrity—with the exception of Crimea. That is why Russia purposefully reined in separatist forces that were operating in the Donbas region, Migranyan said. Indeed, if the Russians had allowed it, those rebel forces could have seized territory much further south in regions where there is a heavy concentration of Russian-speakers.

Indeed, there were ready-made governmental structures already in place that the Moscow-backed rebels could have exploited, but Russia did not exploit those in 2014. Russia could choose to once again escalate the conflict as the United States starts to supply weapons to Ukraine. “Ukraine is not an existential problem for the United States, Ukraine is a existential problem for Russia,” Migranyan said. “[E]very conflict on every level will be lost by the United States because Russia will be ready in its backyard to use every opportunity in order to protect its vital position over there.”

If Moscow’s position in Ukraine is seriously threatened, Russia could openly intervene. “The supply of lethal arms—an escalation of the conflict—can push Moscow to openly to intervene to decide this problem which is long lasting and not decided in a radical way which was not done in 2014,” Migranyan said.

Inevitably, this will lead to even greater tensions with the United States—which will increase pressure on Moscow. As Washington places more pressure on Russia, Moscow will inevitably resist. Moreover, such a move will force Moscow to turn further towards China in an attempt to push back against Washington. Indeed, in Migranyan’s view, Moscow is approaching a “point of no return” where it will seek to enter into a full-blown military alliance with China.

Migranyan asserts that as the United States comes into conflict with China, Russia will become evermore influential. The Chinese, in Migranyan’s view, understand that they need Russia to have a chance at challenging the United States as the dominant power. As such, China will likely prop up Russia because it cannot allow its strategic ally to collapse in the face of American pressure since Beijing cannot stand up to the United States alone.

“I can’t exclude, even if this pressure will be increased, China will understand that Russia is not fighting for its survival,” Migranyan said. “This is existential problem for China. Otherwise a broken Russia—removed away—left China one-on-one against the United States. That why’s in the Chinese existential interest to support Russia.”

In Migranyan’s view, a Sino-Russian alliance would be far more powerful than the United States alone. However, Russia will pay a price for allying with China—Moscow could find itself in a junior position in any such partnership. “China is not a charity,” Migranyan said. “Everything has its price.”

If the United States persists in continuing to exert ever-greater military and economic pressure on Russia, it will face the consequences down the line in the form of a new Eurasia bloc that will challenge its dominance, Migranyan said. Thus, Migranyan suggests that Washington should consider its moves carefully with regard to Russia to prevent such an outcome. “This could be a tragic event, really, to push Russia into a military and political alliance with China during the final confrontation,” Migranyan said. “This will end up catastrophically for everybody.”