Hezbollah's Finances are Its Achilles' Heel 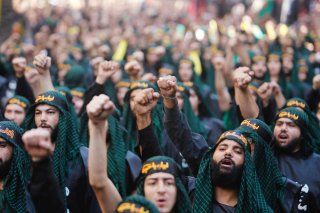 On January 10, U.S. Secretary of State Mike Pompeo maintained that the U.S. administration won't accept Hezbollah’s major presence in Lebanon as the status quo. Speaking from Cairo, where he delivered his speech “A Force for Good: America Reinvigorated in the Middle East,” Pompeo criticized the way Obama handled the Iranian-backed militant group, stressing that the current administration is targeting both Iran and Hezbollah at the same time.

Indeed, since taking office in January 2017, Trump imposed several sets of sanctions on both Iran and Hezbollah, Tehran’s most powerful and one of its oldest allies in the region. Although the Shia Lebanon-based group has been designated as a foreign terrorist organization by the State Department since 1997, the financial and military activities of the group have kept growing in a steady way. In October 2018, the United States designated five groups, including the Hezbollah as a “top transnational organized crime threats.” U.S. Attorney General Jeff Sessions affirmed that disrupting and dismantling activities of these groups is a priority for President Trump and his administration.

For many years, Hezbollah’s foes focused solely on its military capabilities as a source of power while totally ignoring the Shia party’s Achilles’ heel—its financial resources. As a hybrid semi-state actor, the ideological nature, organizational structure, and stretched regional agenda of Hezbollah require huge financial capabilities which surpasses the capacity of normal political parties. Indeed, since 2006, Hezbollah established itself as the second largest employer in Lebanon after the Lebanese state. Although the ideological/religious factor is important in securing the support of the Shia environment, it is mostly through money that Hezbollah is able to carry out its agenda and sustain the loyalty and support of a large segment of Lebanese society.

Since its establishment in the early eighties, Hezbollah relied heavily on the money coming from Iran. However, during the last two decades, it has worked hard to diversify the sources of its financial income. This move aimed to give the party considerable flexibility in critical times, and a greater ability to evade efforts targeting its financial ties with Iran. Among other goals too, Hezbollah wanted to ease the burden on Iran and meet the increasing needs of its stretched regional agenda from its own financial sources.

To that end, the Shia party built its own parallel economy inside Lebanon and indulged in economic and financial activities across several continents—from Africa to Latin America to Asia. Its activities as “a transnational criminal organization” mainly include money laundering, construction, and contracting business among others. Today, Hezbollah’s money comes from five main sources: Supreme Leader Ali Khamenei, Iran as a state, its foreign economic empire, the khums (where Shia Muslims pay one-fifth of their excess income to Iranian religious authorities), and the parallel economy inside Lebanon. The annual budget of Hezbollah is unknown, however, most recent estimates indicate that the Iranian support constitutes around 70 percent to 80 percent of Hezbollah’s budget, which is approximately equal to $700 million. This range was never fixed due to lack of transparency and extended agenda of Hezbollah in the last decade.

Last October, the United States imposed a new set of sanctions on Tehran’s ally in Lebanon under the “Hezbollah International Financing Prevention Amendments Act.” The new legislation is supposed to isolate Hezbollah from the international financial system and reduce its funding by targeting foreign persons and government agencies that knowingly assist or support the group and its affiliated networks that engage in “transnational crime.” During an event marking the thirty-fifth anniversary of the attack on the U.S. Marine Corps barracks in Beirut, President Donald Trump emphasized that the aim of the new sanctions is to further starve Hezbollah of its funds, adding “We will target, disrupt, and dismantle their operational and financing networks—of which they had plenty; they don’t have plenty now.”

Many analysts downplayed the implications of the U.S. sanctions against Iran or Hezbollah on the status of Hezbollah in Lebanon. The Lebanese Daily Star, for example quoted experts saying the sanctions on Iran are unlikely to affect Tehran’s proxy. The General Secretary of Hezbollah, Hassan Nasrallah, maintained that U.S. sanctions on Iran will have no effect on the party. These statements disregard the fact that unlike weapons, Hezbollah cannot survive without the support of its Shia environment.

Although some of its supporters are strong believers in Wilayat al-Faqih (loyalty to the Iranian Supreme Leader), the Islamic revolution, and the Iranian state, most of them are not. Money plays an important role in securing the support of the majority. In addition, through its efforts to diversify its financial resources, Hezbollah has managed to create an economic hub in the southern suburbs of Beirut that has yielded benefits not only locally but also for the greater Shia sect in Lebanon as well as in Syria and Iraq, thus creating a mutual financial interest for its supporters too.

Aware of its financial vulnerability, Hezbollah recently slashed its expenditures and is encouraging its supporters and many of its members to find an official public governmental job. This particular phenomenon is increasing and is happening at the expense of the longtime Shia rival Amal Movement, which mostly represents Shias in public sector jobs in Lebanon. The goal of this move is to shift some of the financial burden to the Lebanese government and to fill the governmental institutions with Hezbollah’s members and supporters. Although the efforts to target Hezbollah’s financial system are not new, they never managed to bring Hezbollah to its knees. There are several reasons which can explain why:

First, the sanctions against Iran are not tight enough. Since 2009, Iranian people are becoming more sensitive regarding the financial support given by their government to regional allies, including Hezbollah. Although more sanctions on Iran might not zero its financial support for its ally in Lebanon, it would certainly reduce it and incite more Iranian people to protest against this kind of support. Historic experience proves that whenever the sanctions on Tehran are tight and/or oil prices are low, Iran as a state tends to reduce its support for Hezbollah to a minimum. This has happened many times during the last decade, especially in 2009 and 2014.

Second, there is a dilemma regarding the Supreme Leader’s money. According to a 2013 investigation by Reuters, Khamenei himself controls tens of billions of dollars in secret investments. It is believed that the financial support coming from Iran’s Supreme Leader Ali Khamenei and his institutions constitutes the bulk of Hezbollah’s budget. Unlike the funds coming from Iran as a state, these funds are even harder to trace and target. It is delivered to Hezbollah from outside of the financial system and mainly through suitcases.

In a television appearance in 2016, Nasrallah openly admitted that “As long as Iran has money, we have money . . . just as we receive the rockets, we receive our money. No law will prevent us from receiving it,” he said, adding that “all the banks of the world cannot stand as an obstacle to Hezbollah.” The fact that Iran has a diplomatic mission in Beirut and Hezbollah has a considerable influence in the Lebanese airport and several ports as well as on borders with Syria makes things much easier. Without the targeting of this resource in particular, no matter how many measures are taken against other sources of Hezbollah’s finance, the party will still be able to operate.

Third, Hezbollah has a foreign financial empire. Although the effort to deprive it from the financial resources coming out from its foreign activities witnessed progress during the last few years, the measures were never strong enough to totally dry out money coming through these means. In order to decrease the impact of these measures, Hezbollah started to utilize its growing presence in the last few years in countries such as Iraq and Syria to establish front companies there. In fact, it channels a lot of money via Iraq and Syria especially through front companies working in business and contracting and via khums money, particularly from Iraq.

Fourth, Hezbollah utilizes the Lebanese state. During the last decade or so, there has been a debate about the way Hezbollah uses the financial system and the institutions of the Lebanese state to facilitate access to the U.S. financial system, launder money, and evade sanctions. Recently, eleven Lebanese banks were accused of providing support to Hezbollah "in the form of financial and banking services." Financial measures that target Hezbollah’s parallel economy in Lebanon are critical but often very hard to implement and even harder to sustain as long as Hezbollah is a part of the Lebanese government and able to utilize its Shia environment and Christian allies to its benefit.

Financial and ideological support for Hezbollah in the Shia environment remains strong. While Hezbollah’s popularity in the Islamic world has declined in the last decade, it has strengthened in the Shia environment. One reason is that Hezbollah wanted a sectarian narrative to prevail in order to rally all Shia Muslims in the region behind it, especially after the eruption of the Syrian revolution in March 2011. As the Syrian war is winding down now, Hezbollah is working to rebuild its legitimacy by opening up slowly but steadily toward many Sunni groups. The “resistance” rhetoric is one tool to cultivate support from Sunnis across the region. If successful, this would provide the Shia party with another layer of protection and makes the efforts to target its financial resources even harder.