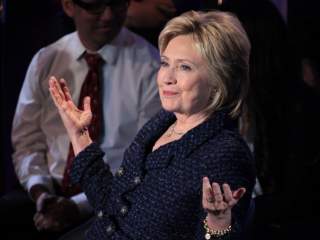 In her March 21 address to the American Israel Public Affairs Committee, the pro-Israel lobby better known as AIPAC, Hillary Clinton spoke mostly about to the lengths to which she would go in protecting Israel from the many dangers it faces. She spoke at great length about Israeli fears and needs, and assured her audience that a White House meeting with Prime Minister Benjamin Netanyahu would be one of her first acts as president of the United States, should she win the coming presidential election.

Among the dangers from which Clinton promised to protect Israel is the “threat” of a Security Council resolution demanding an end to the half-century occupation of the West Bank. She said she would insist that Palestinians can achieve statehood only in negotiations with Netanyahu. Yet even President Obama, who until recently held that same view, finally realized the absurdity of that demand following Netanyahu’s declaration during the last Knesset elections that Palestinians will not live to see a state of their own while he is Israel’s prime minister.

In Clinton’s speech, in which she touched all the necessary pro-Israel buttons, she managed to avoid even a single sentence that acknowledges the subjugation, disenfranchisement and humiliation Palestinians have been subjected to in the half-century of Israel’s occupation.

That carefully calculated omission reminded me of a pro-Israel demonstration sponsored by major Jewish organizations in Washington D.C. during George W. Bush’s administration. Among the speakers was Deputy Secretary of Defense Paul Wolfowitz, a leading neocon and champion of Israel. When, towards the end of his rousing pro-Israel speech, he asked his audience not to forget the suffering of Palestinians, he was roundly booed.

How sad that Clinton could not muster the courage to say what the neocon Wolfowitz, to his credit, felt needed saying, and that Bernie Sanders had the courage to say in a speech AIPAC did not allow him to deliver to its delegates via Skype.

Clinton expressed her deep compassion for Jewish families in Israel who live in fear for their children because of the stabbings of Israelis by Palestinians these past several months. Of course, Israel’s government must protect its citizens from such attacks. But if these “lone wolf” stabbings, mostly by young teenagers, are the consequence of the Palestinians’ endless imprisonment and Israel’s unrelenting theft of Palestinian territory, then Israel’s “obligation to protect” can be met only by ending the occupation.

If instead Israel doubles down on the occupation, it is not protecting its population but exposing it to infinitely greater danger, and the violence to which it resorts to sustain the occupation and its colonial settlement project constitutes terrorism. In the face of that terrorism, it is Palestinian leaders who have the “obligation to protect.” As noted by David Shulman, Professor of Humanities at the Hebrew University (and this year’s recipient of the prestigious Israel Prize) in his latest essay in the New York Review of Books, “Palestinians have lived with the reality of state terror for decades.”

Israel’s reactionary cultural and political regime headed by Netanyahu has put even Israeli Jews at risk. Shulman writes that what is left of Israel’s peace groups is under “sinister and ruthless” attack in “a coordinated campaign involving [Israel’s] government, members of the Knesset [and] the police. . . who resort to violent and illegal arrest, interrogation. . . even death threats issued by proxy. . . .”​

So much for “the only democracy in the Middle East”!

Admittedly, when it comes to virtually every other aspect of domestic and international policy, Clinton operates on an entirely different moral and political level than her Republican adversaries. How sad, therefore, that so little distinguished her AIPAC address from the pandering speeches of the Republican candidates who addressed AIPAC.

Saddest of all, however, was the wild cheering and applause that the racist vulgarian Donald Trump received from AIPAC’s delegates, many of whom were wearing Orthodox head coverings. What bitter irony—particularly for those, like myself, who lived under Nazi occupation—that today there are Jews who celebrate a demagogue who has welcomed supporters who greet him with a Nazi salute. AIPAC’s embrace of extreme nationalist movements in Israel and in the United States can claim the credit for that.

Henry Siegman is the President of the U.S./Middle East Project. He is a former senior fellow on the Middle East at the Council on Foreign Relations, a former head of the American Jewish Congress and of the Synagogue Council of America.