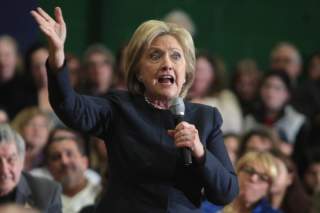 There are times Hillary Clinton seems to think she’s running against her husband.

Bill, standard-bearer for the Democratic Leadership Council and mortician of big government, campaigned for president as a firmly post-liberal Democrat. He wasn’t going to be remembered as another Walter Mondale or Michael Dukakis, not him. In contrast, at last night’s debate, Hillary Clinton either unleashed her inner progressive or strapped on a focus-grouped left-wing mask, depending on how you look at it. Clinton defended late-term abortion, bashed Trump because he wants to cut taxes, attacked the Supreme Court’s Heller decision on guns and promised an extension of the Obama economic stimulus policy.

She tried at times to hedge, pledging to support the Second Amendment even as she railed against a court ruling that struck down an outright handgun ban, but her left-wing tilt was still apparent. Perhaps she believes it’s safer to stump as a progressive coming off an Obama presidency than a Reagan one. It’s an unwise assumption to make. According to focus-group guru Frank Luntz, voters responded negatively to her stimulus apologetics and even her likely supporters rejected her answers on the economy.

So did she lose the debate? It was probably a draw between her and Trump, but the overall winner was moderator Chris Wallace, who squashed audience applause like a bug, kept the focus on policy and never evinced the left-wing biases that some of his predecessors had. The biggest loser was traditional conservatism, the sort espoused by the #NeverTrump little platoons, which came under siege not just from Clinton’s unapologetic liberalism, but also Trump who barraged Clinton on trade from what would once have been described as the left. Questions about debt and entitlements, agreeable to conservatives, elicited inadequate sops about repealing Obamacare and means-testing payroll taxes, and then feline evasions, back to trade and slamming the rich.

About two-thirds of the way through, everything suddenly crumbled into a rubble pile of rambling, personal accusations, quibbles about charitable giving, claims of election rigging, Russian intrigue, Trump hyperbole and those Clintonian flash-frozen grins. But give Wallace credit for keeping it mostly between the cones. This was the best debate of the year by far. Part of that was because Trump, accustomed to disintegrating half an hour in, made it over an hour this time, and landed several haymakers. After a phony answer from Clinton on trade, Trump rejoined, “Can I ask a simple question? She’s been doing this for 30 years. Why the hell didn’t you do it over the last 15, 20 years?” When Clinton unearthed a tweet he sent out years ago claiming the Emmys had been rigged because The Apprentice didn’t win, he smiled rakishly. “Should have gotten it,” he said to audience laughter.

It’s a reminder that America desperately doesn’t want to vote for Hillary Clinton and a less polarizing Republican would probably be winning right now. But this is Donald Trump, and so the above-the-fold headline this morning was his equivocation on whether he would accept the result of the election. And then came his personal baggage, flying out of the overhead bins. On the myriad women accusing him of sexual assault, Trump claimed their stories had been “largely debunked” (they haven’t), and when he declared that nobody had more respect for women than he did, Luntz’s sample voters cranked their dials downwards.

Perhaps last night’s biggest irony is that Trump was at his best on policy while Clinton scored highest on questions of character. Her husband might have run as a post-liberal, but she’s campaigning as a pre-counterculture Democrat, a tempered FDR, grafting a morally crusading executive and a centralized economic agenda to a muscular foreign policy. That meant yet another “push for a no-fly zone and safe havens within Syria,” buttressed this time by an assurance that this would “gain some leverage on both the Syrian government and the Russians.” Given that establishing safe zones would require a significant ground presence in areas where the Russians are already active, Clinton seems to be saying she’ll risk military conflict with a nuclear power to gain an edge.

CNN is ablaze this morning about Trump’s recklessness. He wasn’t the only one.