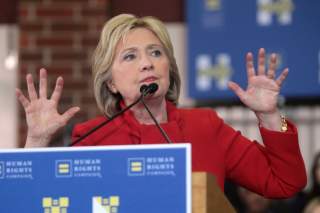 When Bill and Hillary Clinton arrived in Washington as president and first lady in 1993, the Wall Street Journal editorial page went on the attack, suggesting they brought with them from Arkansas a brand of politics that was inherently corrupt, with personal gain routinely and consistently factored into official decision making. The paper took a lot of heat for this line of editorial criticism in the absence of definitive proof of mendacity on the part of the new president and his wife.

Then came the cattle-futures scandal, in which Hillary hauled down a $98,540 profit in cattle futures in less than a year of trading on a $1,000 investment, without maintaining the normally required fund reserve to diminish the risk of leverage. Further, she was advised on the matter by an outside lawyer for Tyson Foods, a giant Arkansas company with big interests before the state government, where Bill Clinton served as attorney general and then governor.

Thus began a pattern that has led us to Hillary Clinton now as the Democratic presidential nominee even as multiple polls indicate that fully two thirds of Americans consider her dishonest and untrustworthy. During the Clinton White House years, following the cattle-futures scandal, came "travelgate," "filegate," and the Whitewater land investment scandal, in which a box of missing papers, under subpoena for two years, miraculously appeared in the White House living quarters—but only in copy form; the originals were never recovered. It seemed that the Clintons were constantly mired in scandal or hints of scandal, always struggling to stay ahead of nettlesome little revelations that raised persistent questions about their ethical rectitude.

There can be no doubt that these episodes from the distant past, combined with Hillary Clinton’s more recent ethical lapses related to her doing public business on a private email server, have contributed to her reputation as a person who can’t be trusted to tell the truth or conduct herself strictly on the up and up.

Does it matter? That’s for the voters to decide. But every voting booth decision requires a multidimensional analysis that includes an assessment of the favorable and unfavorable attributes of each candidate. Herewith an assessment of Hillary Clinton’s unfavorable attributes, constituting a case against her. This isn’t designed to be definitive for any voting decision but rather a warning that all candidates have downsides, and Clinton’s are significant.

One could argue, in fact, that the Democratic Party was reckless in granting her the nomination, given her past embroilment in scandal and prospects that new revelations could catch up with her during the campaign or through her presidency. Although FBI Director James Comey didn’t recommend an indictment against her related to her email server, he said she was "extremely careless" in her handling of "very sensitive, highly classified information." Thus, he declined to take actions to destroy her candidacy and left it to voters to assess the magnitude of her lapses.

But the recklessness of her behavior is reflected in questions now being raised about whether damaging new revelations about her could be forthcoming from hackers, foreign or domestic, who gained knowledge of her activity via her unprotected server. Security experts have suggested there is a strong likelihood that China, Russia and other hackers gained access to all 63,000 emails on Clinton’s private, unprotected server—including the 33,000 she destroyed under the contention that they were merely personal and had nothing to do with her official actions and decisions.

But if those emails contain evidence of questionable actions, as the Wall Street Journal’s L. Gordon Crovitz has argued, Russian President Vladimir Putin "will have the capacity to blackmail her at will" should she become president.

What kind of evidence of questionable actions could be found there? We don’t know, but it would be imprudent to dismiss the possibility that it could be related to the Clinton Foundation, that international good-works institution created by Bill Clinton that doubles as a repository of political/financial power for the Clintons. It has served as a lucrative way station for Clinton cronies waiting for Hillary Clinton’s next campaign. It has positioned Bill Clinton to collect huge speaking fees from major overseas and American corporations and from foreign governments—some $105 million for 542 speeches between the time he left the White House and the time Hillary left her job as secretary of state, according to the Washington Post.  It has rewarded Clinton friends and political allies within a Clinton network that constitutes a potent political force.

The foundation, we learn (through not from the Clintons), continued to receive money from foreign governments even during Hillary’s tenure as secretary of state, although she had promised that no such money would be accepted during her public service. The money flowed in from such countries as Algeria, Kuwait, Qatar and Saudi Arabia. Swiss bank UBS contributed some $500,000 after Secretary Clinton helped settle an IRS problem dogging the bank. The Associated Press reported that Hillary Clinton excised from her official State Department calendar some seventy-five meetings she held with "longtime political donors, Clinton Foundation contributors, and corporate and other outside interests."

Was there actual corruption going on here in the form of quid pro quos, or merely the appearance of corruption? We don’t know, though those 33,000 emails may hold the key to that question. But, in any event, we see a pattern that first came to light with the cattle futures scandal—big sums of money flowing to the Clintons as they conducted official business to the benefit of the individuals and organizations providing the money.

Leaving aside the corruption question, the Clinton Foundation represents a giant stride toward American oligarchy—the flow of power from the people at large to clever and connected elites who know how to game the system to their political and financial advantage. It is noteworthy that, in this year of seething political anger directed against the country’s elites, Hillary Clinton is emerging as the likely next president even as she projects herself as the embodiment of what is stirring all that national anger.

Which brings us to another major element in the case against Hillary Clinton. She will give us, as many have suggested, Barack Obama’s third term. The country is deeply divided on the Obama presidency, and it’s appropriate that Americans should debate his legacy as his departure nears after White House eight years. But, whatever one may say about him, it can’t be denied that he failed to solve the country’s crisis of deadlock. When the country needed a new paradigm of governmental thinking to break the deadlock and move the country in a new direction, he doubled down on the stale old politics perpetuating the political stalemate of our time.

There is no reason to believe Hillary Clinton would break the deadlock. She represents the politics of old when the country desperately seeks something fresh, capable of scrambling up the old political fault lines and forging new political coalitions that can give propulsion to a struggling America. Hence, under her leadership, we likely will see the continuation of the current deadlock crisis for another four years. That’s a long time for that kind of crisis to fester, generating ever greater anger, frustration and civic tension.