Hillary Clinton and the Road Ahead 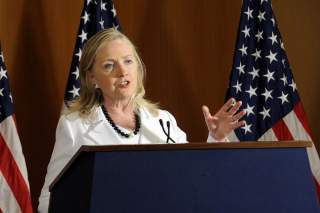 Our capacity to judge national leaders fairly and objectively disappeared with the rise of partisan media and politics and the erosion of moderation. About no one is this truer than about Hillary Rodham Clinton.

Senator Clinton (pardon the obvious preference for that particular title) is responsible for breaking more glass ceilings than any other modern leader, and in doing so has incurred the disdain, if not also the wrath, of more than her fair share of critics. Much of this wrath is irrational, intemperate and, needless to say, grossly unfair.

Looked at in full, Senator Clinton is more than ordinarily intelligent (one of the early, and thin, glass ceilings was at the Yale Law School), articulate, engaging, self-controlled and self-confident—in short, a threat to Cro-Magnon masculinity. Her success in emerging at the top of the fraught New York political pyramid as a newcomer demonstrated extraordinary political skills. And, representing the United States in a bewildering array of venues as its top diplomat, she proved at ease with world leaders.

Senator Clinton was awarded the media nomination for president even before announcing her intentions. She is canny and heavily experienced enough to know, however, that the same hand that feeds is also the hand that beats. And beatings that hand will surely deliver.

There are surprisingly few, even experienced, politicians who understand that a presidential candidacy is not merely a fifty-state version of a campaign for governor or Senator. She is among the few. Senator Clinton has seen presidential politics from every conceivable angle and will be surprised at little, if anything, that emerges from a suddenly hostile press and a virulently hostile opposition party.

Take, for example, basic questions that should be asked about future national policy. What further measures in fiscal and monetary policies, including budget controls, taxation, infrastructure investment, education, health and other arenas are necessary to maintain a hard-fought economic recovery? What measures are available to the United States to prevent all-out warfare between Sunni and Shiite communities throughout Islam and particularly in the high-octane Middle East? How specifically should we reform force structures and weapons procurement to adapt our military forces for low-intensity, unconventional conflict in multiple arenas throughout the world, a task that could well have been initiated during her husband’s presidency?

Media compression—the demand that complex policies be reduced to sound bites and bumper strips—and the natural political instinct to avoid specificity give ample reasons to skim across the communications surface and avoid crucial specificity. Yet there are many of us who want to know how a potential president thinks, how he or she intends to deal with epic policy decisions and how—in particular terms—we manage a host of new realities.

Competition for a presidential nomination is the sole means by which these goals are achieved. (The media focuses almost entirely on tactical political matters.) Senator Clinton should welcome that competition and not permit her army of consultants and political mediators to organize a campaign of inevitability, as they are currently doing. No single method for achieving political strength is available that is more effective than competition—competition over ideas, not personalities. Testing during a nomination process produces a stronger general election candidacy than does fundraising and endorsements. Healthy competition over ideas provides the best opportunity for Senator Clinton to define herself anew for the twenty-first (not the twentieth) century.

The greater challenge for Senator Clinton, however, is the same challenge faced by our nation. That is the betrayal of our foundational political ideals. Our Founders created a Republic, one that resisted corruption in the form of special and narrow interests replacing the common good. Indeed, the Founders feared that kind of corruption more than any other threat to their new nation’s survival, for it was the erosion of civic virtue and the pursuit of personal and group preference that had destroyed all republics throughout history from Athens forward.

Late seventeenth- and eighteenth-century England divided itself between Court and Country. We are repeating the same division. The twenty-first-century American Court is composed of tightly woven inner circles of office-holders, lobbyist fundraisers, consultants and rotating appointees in both parties. The Country is all the rest of us and particularly those of us who seek patriotic means of affecting openness and access in governance.

This brings us to what has come to be called the “dynasty” issue. It is not disrespectful to question why we have arrived at a time when only two families in a great nation such as ours dominate our parties. When our democracy narrows our choice of leaders to a few (and a very narrow few at that) by raising the costs of campaigning to astronomical levels that only members of the Court can achieve, and when those costs are covered by special interests, oligarchs and the powerful, privileged and favored, confidence in government suffers severe erosion.

Further, we pay a very heavy price in world opinion, calling our advocacy of openness, transparency and access to political processes into serious question.

Senator Clinton should address this matter forthrightly. Instead, unnamed spokesmen for her campaign have let it be known that they intend to raise one billion dollars. That is not to demonstrate widespread public support. It is to deter competition. And it is to signal special access to the treasury of the Court, a treasury that guarantees access at the highest levels in exchange for the largest-scale campaign investments by special interests and hidden political action committees.

Will a cabinet and subcabinet in a future third Clinton administration (and for that matter, a fourth Bush administration) be composed of many of those who have served before, or will there be a national search outside the precincts of the Court, in the Country at large, for new ideas and creative thinkers? Will the high walls protecting the Court come down, or will it be another four or eight years of the same policies, the same people, the same networks and the same revolving doors.

Senator Clinton has deservedly earned the high regard in which she is held by millions of those who admire and support her, and she certainly deserves greater respect than her partisan attackers are willing to grant. But heavy is the head that wears the crown, even a crown of presumptive nomination. And no one knows the blood sport American politics has become better than Hillary Clinton.

Candidate Clinton would benefit most from what she desires the least: intelligent and thoughtful competitors with new and interesting policy ideas; full and complete disclosure of all campaign contributions, including from hidden political action committees; a huge influx of small contributions; a new retinue of junior and senior advisors and policy thinkers; open town meetings and acknowledgment that the windows and doors of the closed system of Washington politics must be opened.

Gary Hart is the author of a new book, The Republic of Conscience, to be published July 4, 2015.