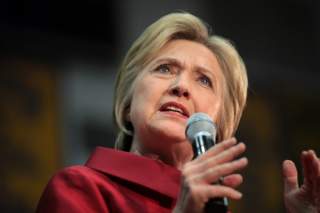 As the general election heats up, Clinton supporters have been eager to tout the virtues of her foreign-policy experience relative to Donald Trump. And as a former Secretary of State and First Lady, no one questions Mrs Clinton’s bona fides in that regard.

There is just one problem. Foreign-policy stewardship over the past two decades has been the most cataclysmic for American interests abroad in the entire history of the Republic—and Clinton has been in favor of all the biggest mistakes.

First, there was the Iraq War. Without question, it was the single greatest foreign policy catastrophe of the past 40 years. Undertaken without UN endorsement, with a justification that was totally wrong, Iraq fast became a strategic quagmire. De-Baathification destroyed the Iraqi state, gave rise to a Sunni insurgency, and cost thousands of American lives and trillions of dollars. Hillary Clinton voted for the war.

Meanwhile, in 2003 Iran offered the United States a grand bargain. Everything was on the table. Iran would dismantle its nascent nuclear program, assist the U.S. stabilize Afghanistan and Iraq, cease its support of proxy militants and even accept the existence of Israel. The Bush administration rejected it. Back then Iran had tested a single ten-centrifuge cascade, which increased to over nineteen thousand centrifuges by 2014. Under the 2015 nuclear deal that limit is now over five thousand centrifuges, which continue to enrich uranium and will be upgraded in less than eight years’ time.

As Secretary of State, Hillary Clinton was a cheerleader for those overthrowing governments friendly to the United States (such as in Egypt). These governments ended up being replaced with the Muslim Brotherhood, dictatorship and chaos. The Arab uprisings, combined with the ham-fisted withdrawal from Iraq, led to the formation of ISIS, which subsequently took over much of Iraq and Syria, extending its reach deep into the surrounding Arab states.

This includes Libya. Gaddafi had previously given up his WMD program and sought to reconstitute himself into the international system. The price he paid for this cooperation was severe. Relying on Clinton’s assurances, Russia abstained from UN Resolution 1973, enabling military intervention to protect civilians under the explicit understanding that this would not mean regime change.

Clinton immediately reneged on the deal (which I warned against at the time). NATO bombing led to Gaddafi’s overthrow in favor of ISIS-style militants. Later, four Americans including Ambassador Stevens were murdered at an American diplomatic compound in Benghazi on Clinton’s watch. Today Libya is a failed state. Obama has since labelled this his single greatest failure as president, a failure for which Clinton is largely responsible.

So much for the reset. In the wake of the Libya betrayal Russia became hostile and resurgent in Europe (albeit not merely because of it). After the Georgia conflict Russia reorganized its military, and began fielding new medium-range missiles in violation of the INF Treaty. In 2014, Putin annexed Crimea and fueled the Ukrainian civil war in open defiance of NATO and the United States. Obama’s response has been risible.

And then there’s Syria. In 2011 Secretary Clinton then repeatedly stated “Assad must go” (FYI six years on he’s still in power). Obama destroyed America’s credibility around the world by imposing a ‘redline’ on chemical weapons being used in Syria that he was never willing to enforce. In the end Obama had to be bailed out by Russia, who brokered a deal with Assad to have those weapons removed.

Most damning, however, is Clinton’s boast about how she strongly advocated arming Sunni rebels against Assad. Of course, ISIS later captured Mosul, seizing billions of dollars in U.S. military equipment anyhow.

While the United States was lurching from one failure to the next in the Middle East, massive challenges arose in Asia. North Korea has now completed four nuclear tests of increasing sophistication, and has made strides in long range ballistic missiles and SLBM technology. As a consequence, Obama bequeaths his successor a North Korea that will have the capability to conduct a nuclear strike on the United States within an eight-year term of office.

To underscore just how feeble the United States has become over the past decade and a half, consider this mind-boggling statistic: when George W. Bush went into Iraq, the U.S. economy was eight times larger than China’s. Today, China’s economy is about three-quarters that of the U.S. and will certainly eclipse it within a decade.

China is America’s greatest long-term challenge, and is fast reemerging as a global superpower that seeks to expel the United States from Asia. It commits cyber theft on an industrial scale, employs mercantilist trade practices and currency manipulation, and of course, is asserting its expansive territorial claims by force. China has dredged three thousand acres of new land in the South China Sea, and Obama has done nothing to stop them. The U.S. Navy is increasingly unable to operate safely in the region, while China’s military budget continues to grow at double digits almost every year.

No matter where you look, whether it’s Iran’s expansion in the Middle East, Russia’s aggression in Europe, nuclear proliferation in rogue states, or China’s bid for regional hegemony, the verdict is in—those running American foreign policy have been an ignominious disgrace on every possible front and in every conceivable respect, and Hillary Clinton has been central to that failure.

Others have accurately foreshadowed American foreign policy under a new Clinton presidency. In clear contrast, Trump is centered in realism. As Senator Jeff Sessions recently confirmed, Trump’s foreign policy resembles that of Henry Kissinger. And as I’ve previously explained, this approach is best able to meet America’s key challenges and restore its pre-eminence in the world (See ‘Trump, a Nixon-Kissinger realist’).

Along this path Trump has taken positive steps. He’s now met personally with Kissinger, and delivered a major foreign policy speech where he laid out a realist platform: be unafraid of bold reform where a changing global environment demands it; ensure scarce resources support a cohesive strategy; and exercise sober reflection with respect to past failures in order to avoid their repetition—Not what America has been doing in recent times!

Under Hillary Clinton America’s foreign policy establishment has developed a culture of failure without accountability. As Donald Trump has said:

It’s time to shake the rust off America’s foreign policy… I have to look for talented experts with new approaches and practical ideas, rather than surrounding myself with those who have perfect resumes but very little to brag about except responsibility for a long history of failed policies and continued losses at war.

Hillary Clinton represents precisely that continuity—something that America can no longer afford.

Crispin Rovere is a member of the Australian Labor Party and previous convenor of the ACT ALP International Affairs Policy Committee. Formerly he was a PhD candidate at the ANU's Strategic and Defence Studies Centre (SDSC) and previously worked in Secretariat of the Asia-Pacific Leadership Network for Nuclear Non-Proliferation and Disarmament, and published on nuclear policy.