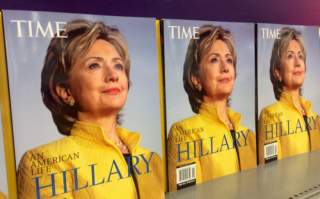 Here we go again. Just when it looked as though Hillary Clinton was set to roll to the Democratic nomination, fresh peccadilloes involving her and Bill are surfacing. They may be waved off as manifestations of CDS—Clinton derangement syndrome—but that would be a mistake. The fact is that that the Clintons have a penchant for skirting not just the spirit but also the letter of the law when it comes to their own perks and prerogatives.

Recall, for example, Bill and Hillary looting the White House, during the last days of his presidency, sending $28,000 of furnishings, registered to the National Park Service, to their New York home before they had to depart the place. Or there was Hillary piously announcing that the Clintons, after they left the White House, were “dead broke”—even though she had just signed an $8 million book deal.

The Clintons, in other words, don’t get caught up in difficulties. They are surrounded by a miasma of scandal, both real and imagined. The latest one was broken by the New York Times and is engulfing the nascent Clinton presidential campaign, just as it was trying to deal with one reported a few days earlier by the Washington Post about allegations of malversation at the Clinton Foundation. In short, the new Hillary turns out to be the old one, and not a few Democrats are suffering their personal political version of PTSD over it all.

Hillary Clinton serenely says, in a twitter message, from on high: “I want the public to see my email.” No, she doesn’t. But the bad publicity surrounding her extensive effort to conceal her messages from the public by, in effect, running her own email exchange out of her Chappaqua home is forcing her to cough them up. The House Select Committee, which is investigating Benghazi, has now subpoenaed the State Department for her emails.

Whether they contain anything embarrassing or even scandalous is an open question. If anything they will likely reveal further evidence of her good points, such as they are (humorless drudge), and bad ones (petty and peevish), but no major bombshells. The attempted cover up is more interesting, to put it another way, than what she was actually covering up.

Still, the question of what she was trying to conceal exists because of her own furtiveness. As Sam Tanenhaus pointed out at a luncheon at the Center for the National Interest on Wednesday, historians rely on a reliable and accurate record of documents such as the State Department’s distinguished Foreign Relations of the United States series. Clinton’s actions violate both the spirit and letter of the law that cabinet officials leave behind a clear and comprehensible documentary record.

In June 2011 White House press secretary Jay Carney said, “all of our work is conducted on work email accounts; that's part of the Presidential Records Act." What’s more, the Federal Records Act requires that she have a government email and preserve her messages. Of course she didn’t.

In extenuation, Clinton and her janissaries now claim that she turned over some 55,000 emails already to the State Department. But this won’t wash. As Chris Cillizza correctly points out, this practice unilaterally allowed her to decide what she does—and does not—wish to furnish.

The brouhaha over her emails—coming hard on the heels of reporting that the Clinton Foundation is awash in foreign donations—is raising doubts among Democrats about the viability of Clinton herself as a presidential candidate. Politically, the flap over her emails comes at an opportune moment for vice-president Joseph Biden and other possible candidates. Perhaps the Democrats, like the GOP, will experience an actual run for the nomination rather than a coronation. There was no cogent reason for Clinton to skirt the law, just a predilection for secrecy. The irony of it all is that a preemptive attempt to secrete, as much as possible, any information that might possibly aid her adversaries, could in the end prove her undoing.

The only question surrounding Clinton isn’t how she will deal with the kerfuffle over her emails but what other shenanigans will be revealed in coming months. Perhaps Clinton can weather this furor, but how long until the next one erupts?

Small wonder that cracks are starting to appear in the plinth that Hillary and her associates have been constructing for her to appear as the inevitable candidate for the presidency. Just as a Jeb Bush candidacy would revive the specter of the disastrous second Bush presidency, so a Clinton run, more than ever, would have a Groundhog Day feel to it.

Jacob Heilbrunn is the editor of The National Interest. You can find him on Twitter: @JacobHeilbrunn.