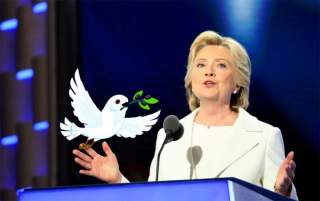 In foreign policy, it’s starting to look a lot like 1992 again. That was the election year a number of second-wave neoconservatives contemplated casting votes for then governor Bill Clinton. A few did actually end up crossing party lines—once again, that is. But today, it doesn’t bode well for Secretary Hillary Clinton, the 2016 Democratic Party nominee, that liberal interventionists who ardently backed the Bush Doctrine, specifically its “Freedom Agenda” component, are giving her a glance.

It’s not ideal because the Democratic Party has changed since her husband ran for the presidency almost a quarter-century ago, since “the unipolar moment” and “the end of history” have become terms used only quaintly in political-science departments. It has jerked leftward with respect to foreign affairs in the twenty-first century, due mainly to the prolonged conflicts in Afghanistan and Iraq and, more recently, due to Senator Bernie Sander’s vociferous crusade against “job-killing” trade deals. Clinton, of course, voted to authorize use of force in Iraq—which she now regrets—and called the Trans-Pacific Partnership the “gold standard”—which she now regrets as well.

Clinton is both a hawk and a globalist. There’s no denying that. The issue for her campaign, though, is whether it will gain more independents and middle-of-the-road liberals than it will lose antiwar progressives—who are not generally reflective of the Democratic Party but who are in fact influential—with displays of patriotism and strength.

Like faded high-school quarterbacks who drunkenly return to the gridiron at midnight to reminisce about the glory days, so too do pacifists pour forth every four years for conventions to try to relieve heady events of the Vietnam era. (Code Pink was taken off the floor by security, while activists burned American and Israeli flags outside the Wells Fargo Center.) While most others of their generation have discovered genuine meaning in family, profession, and leisure, they continue to chase an ever-fading time in which the world was on the edge of revolution—or so they thought—and they were needed to tip the scales. Yet as far as disposition toward the abroad is concerned, they’ve found some odd bedfellows this cycle.

Indeed, complicating matters, the Republican nominee, Donald J. Trump, not only exudes patriotism and strength, but has been excoriating foreign entanglements—ranging from nation-building pledges to military alliances to trade deals—since the day he tossed his coif into the ring. (Minutes before midnight, Trump tweeted: “Hillary’s wars in the Middle East have unleashed destruction, terrorism and ISIS across the world.” The digital missive has earned more than 12,000 retweets and 31,000 likes.) So for those interested in the international stage, the question going into the final night of the Democratic National Convention was this: How would Clinton please, while offering an image of American fortitude, a political party and a nation increasingly weary of the world?

The short answer is that she, if not the DNC too, went full Uncle Sam. Khizr Khan, a Muslim American whose son died serving in the Army, delivered a stirring address about honor and undivided loyalty to the nation. Shortly afterward, John Allen, retired Marine General and former Commander of U.S. Forces in Afghanistan—while standing alongside thirty-seven military veterans—gave a rousing speech on American leadership. He was immediately followed by retired Army Captain Florent Groberg, a Medal of Honor recipient, who spoke passionately about veteran care.

There was, however, marked dissent. The contingency that, for example, interrupted former CIA Director Leon Panetta’s speech on Wednesday by chanting “no more war”—comprised mainly of Sandernistas and West Coast delegates—continued their heckling last night. “No more war” was repeatedly heard while General Allen was at the podium, though consistently drowned out by chants of “U-S-A, U-S-A.” What provoked the pacifists? “We believe,” Allen boomed, “in [Clinton’s] vision of an America as a just and strong leader against the forces of hatred, the forces of chaos and darkness.” “With her, as our commander-in-chief,” he continued, “America will continue to lead this volatile world. We will oppose and resist tyranny, and we will defeat evil. America will defeat ISIS and protect the homeland.”

Then there was Clinton’s hawkish speech, which was, quite a few times, met with chants of “no more war,” which were continually and quickly overridden by chants of “Hil-la-ry” and “U-S-A.” Here are a few of the statements that provoked the lefties:

“Our military is a national treasure.”

“Keeping our nation safe and honoring the people who do it will be my highest priority.”

“I’m proud to stand by our allies in NATO against any threat they face, including from Russia.”

“I’m proud that we put a lid on Iran’s nuclear program without firing a single shot—now we have to enforce it, and keep supporting Israel’s security.”

“I’ve laid out my strategy for defeating ISIS. We will strike their sanctuaries from the air, and support local forces taking them out on the ground…. It won’t be easy or quick, but make no mistake—we will prevail.”

Now, I (masochistically) watched both conventions nearly in full, and my honest opinion is that there was a perceptible “patriotism gap,” not least because the DNC apparently forgot to place American flags on the stage during day one. And let me be very clear. There’s a difference between supporting war and supporting veterans. One might disagree with the reasons for a particular conflict and even despise violence in all situations. But those who have heeded the highest calling and donned the uniform deserve respect, if not admiration. Alas, there is a portion of the Left represented by individuals like MSNBC’s Chris Hayes, who declared on the eve of Memorial Day in 2012, “I feel uncomfortable about the word ‘hero’ because it seems to me that it is so rhetorically proximate to justifications for more war.”

There was noticeably less applause for veterans throughout the DNC’s convention than there was throughout the RNC’s convention. I’ve stressed “throughout” because yesterday’s scene in Philadelphia stood out from the rest of the gathering. The arena was absolutely saturated with American flags and signs reading “USA.” It was the DNC’s way of saying, “Don’t worry America, your progressive children love you. They just have a funny way of showing it.” And I’m not the only person to have noticed this shift in tone and scenery. “Clearly,” noted CNN anchor Anderson Cooper, “they have been very focused on answering some of the criticism that the Democratic Party has received over the last several nights of not addressing fallen police officers, military strength.”

But here’s where I feel the Democrats are really, really going astray—and possibly throwing this election to Trump well before November. They’re repeatedly asserting that the Right is exploiting the anxieties of citizens. Yet many, if not most, Americans are worried about the economy and national security. Further, they’re not foolish children charmed by sweet slogans like “love trumps hate” and “America is already great.” And anxieties, contrary to what the Left claims, are not always pernicious. They can motivate and effect progress. They cause people to study for exams, prepare for job interviews, and launch movements for social change. Anxieties alter the status quo. Instructing people with a smile to simply disregard what they’re feeling in their pocketbooks and seeing on television, might not be a winning formula.

In her speech, Clinton mentioned “terrorism” and “terrorists” only once. As for Islamic extremism, there was merely a euphemistic reference to “determined enemies” found “[f]rom Baghdad and Kabul, to Nice and Paris and Brussels, to San Bernardino and Orlando.” In conventional times, this type of nuanced rhetoric and diplomatic balance between arrows and olive branches might prove the keys to the White House. But these are far from conventional times.

Jonathan Bronitsky is a commentator and historian. He holds a Ph.D. in History from Cambridge. You can read his writings at jbronitsky.com and follow him @jbronitsky.