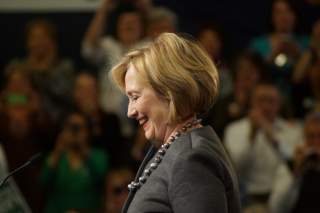 Democratic presidential nominee Hillary Clinton’s global network of donors and allies has long been criticized by opponents as a sort-of “who’s who” list full of shady bankers, dictators, and backroom power brokers. Add alleged military coup backers to that list.

No matter where you look, Bill and Hillary Clinton always seem to wind up at the center of a possible corruption scandal. The Clinton Foundation, as Peter Schweizer reported in the New York Times, was at the center of shady dealings between Russia and the Clintons. Bill Clinton received $500,000 from the politically connected Russian firm Renaissance Capital for a speech. Hillary Clinton, then Secretary of State, saw to it that a Russian bid, linked to the same firm and supported by Vladimir Putin, to acquire around twenty percent of the American stockpile of uranium was approved. This directly suborned American national foreign-policy interests to Moscow. Then there are the Clinton Foundation’s relations with the Gulf States. Once again, buckraking to the tune of over $85 million from the likes of Saudi Arabia, Kuwait and Oman commanded precedence over all for the Clintons. Bill Clinton himself is buddies with the tyrannical ruler of Dubai, Sheikh Mohammed bin Rashid al-Maktoum, and entered into business arrangements with him. So much for Hillary Clinton’s pious avowals to be in the vanguard for women’s rights or child labourers. When it comes to turning a dollar, both Clinton have an elastic sense of morality. The Clinton Foundation isn’t tainted by such unethical dealings; it is suffused by them.

Now there is a new scandal that promises to be a doozy. It surrounds the alleged connection between the Clintons and the shadowy Islamist at the center of the July 15th failed military coup in Turkey—Fethullah Gulen.

According to a 2015 USA Today investigation, Gulen’s followers have been accused of “illegally financing congressional travel abroad” and providing “hundreds of thousands of dollars of improper campaign donations to congressional and presidential candidates.” Both President Obama and Hillary Clinton were linked to this Gulen web of illegal finance in the USA Today report.

A Daily Caller investigation has taken the corruption accusations much further. It claims the Clintons have pocketed millions from Gulen’s disciples and that these funds have been deftly spread among Hillary’s presidential and senate campaigns, the Clinton Foundation and Global Initiative, speaking engagements, and “Hillary Clinton’s top lobbyist bundlers” like the Podesta Group—although there is insufficient sourcing in the article to independently confirm all of these allegations.

Just who is Fethullah Gulen and why should voters care if Hillary Clinton really is being bankrolled by Gulenists? Gulen is viewed within the world of Islam as a “messiah,” his goal in Turkey is an Iranian-style Islamic state, and his profile bears a striking resemblance to Ayatollah Khomeini, who ruthlessly engineered Iran’s Islamic revolution from bases in Iraq and France in the 1970s.

Gulen fled to the United States in the late 1990s after being accused of attempting an Islamic-style takeover of the Turkish government. Today, he lives in comfortable exile on a twenty-eight-acre compound in Pennsylvania’s Pocono Mountains. According to the New York Times, his “devotees have built a worldwide religious, social and nationalistic movement in his name,” and Gulen himself even claims to be a “pen pal” of Hillary Clinton.

If Gulen’s critics are to be believed, he poses both an internal “stealth or cultural jihad” threat to the United States and an external threat to democracy and stability in Turkey—which is why Hillary’s potential Gulenist financial connection is so alarming.

Regarding the internal threat, Gulen’s vast network of U.S.-taxpayer-funded charter schools number over 160 and are spread out over more than twenty-five states. While Gulenists market these schools as beacons of math and science, they appear to be riddled with the same kind of rampant corruption and hidden agendas of the Clintons themselves. Allegations include bid-rigging, funneling construction and innovation work to Turkish-owned contractors, grade manipulation and inflating attendance to increase taxpayer financing, replacing qualified American teachers with unskilled Turkish substitutes who are then used as vehicles to funnel cash back to the Islamic movement in Turkey, and even discriminating against women teachers—Hillary feminists take particular note.

As for Gulen’s external threat to Turkey, the Gulenists make no secret of their desire for an Islamic state. What makes Gulen so dangerous is his cleverness in using what Turkish journalist Mustafa Akyol calls a “cultish hierarchy” to “quietly infiltrate” the pyramids of power: “Top-level imams give orders to second-level imams, who give orders to third-level imams, and it goes on like that to the grassroots.”

Along this fifth column way, the Gulenists hide their identities and are thereby able to gain increasing control over “Turkey’s state institutions, like the police, judiciary and military.” As Gulen, himself, has allegedly advised his followers in an infiltration strategy eerily reminiscent of Mao’s “swim with the fish”:

You must move within the arteries of the system, without anyone noticing your existence, until you reach all the power centers.... You must wait until such time as you have got all the state power, until you have brought to your side all the power of the constitutional institution in Turkey.

This, then, is the man, the messiah, the checkbook, and fleas that Hillary and Bill Clinton may have chosen to lie down with. This is also the Gulenist mastermind who Turkish president Recep Erdogan has accused of orchestrating the failed July 15 coup and who Erdogan is demanding be extradited from the US to stand trial for his treason.

As noted in the New York Times, there is as yet no “smoking gun” to prove Gulen did indeed mastermind the coup—and the United States is asking for such proof to justify his extradition. Nor is there any “smoking gun” to confirm the counter-theory advanced by Gulen himself, that Erdogan himself staged this fake “wag the dog” coup to justify what has been a brutal and wholesale purge within the Turkish government—with thousands of military and civilian officials already removed.

To his many prodemocracy critics—BBC, The Atlantic, New York Times, among many others—the “ruthless,” “authoritarian” Erdogan is no better than Gulen, and may be worse. As a cynical Erdogan himself has proclaimed: "Democracy is like a street car; you ride it as far as you need, and then you get off" and "the mosques are our barracks, the domes our helmets, the minarets our bayonets and the faithful our soldiers."

In the worst case scenario, Erdogan may seek the establishment of an Iranian-style democracy in name only that is tightly controlled by clerics under the boot of Sharia law. The real losers in this scenario—beside Turkey’s European neighbors and the NATO alliance—will be the large share of the Turkish population that longs for a peaceful secular state in the mode of the first president of Turkey in the 1920s, Mustafa Ataturk who abolished the Turkish caliphate.

Despite Erdogan’s many harsh critics, Hillary Clinton does not appear to be among them. In her memoir Hard Choices, Clinton describes him as “ambitious, forceful, devout, and effective.” Most controversially, Clinton criticized the secularist Turkish military for repeated interventions “to topple governments it saw as too Islamist, too left-wing, or two weak,” claiming that these coups “delayed democratic progress”—Erdogan could not have written better.

A Compromised and Corrupt President Clinton?

At the end of the day, Clinton’s links to Erdogan politically and possible financial ties to his archrival Gulen raise very troubling questions about her ability to govern should she become president. For example, if allegations about the Gulenist funding of the Clintons are true, would a President Hillary Clinton really move forward with the extradition of Gulen back to Turkey? If not, and if Gulen really is trying to overthrow the Turkish government, is Hillary not aiding and abetting instability and violence in a key NATO ally?

Even more darkly, if the Gulenists really do have their corrupt hooks into the Clintons, might a President Hillary help orchestrate a coup to try to topple Erdogan? Erdogan certainly might think so—and even that suspicion or paranoia or whatever you want to call it on the part of Erdogan might be enough to poison US-Turkey relations during a Clinton administration and push Erdogan right into the arms of a now-beckoning Russia—perceptions here may be far more important than any reality.

As for Gulen’s charter-school empire, it seems long past time this shadowy network be fully investigated not just for its alleged corrupt practices and abuse of taxpayer money but also for its potential to serve as a fifth column for the spread of Islamic extremism within the United States. Here, it is doubtful that a President Hillary would ever initiate such a probe if she has indeed been in Gulen’s pocket—and she would likely quash any such investigation in its crib.

At the end of the day, these are all key factors for voters to consider—particularly women and those of the LBGT community who would be forcibly veiled or stoned to death if they lived under the kind of repressive Sharia Law rule we are witnessing throughout the Middle East. At a minimum, the Clintons need to come clean on their Gulen connections—confirm or deny rather than simply stonewall as they are now doing. The voters deserve this courtesy.