With His Tweets, Trump Is Raising the Ante For 2020 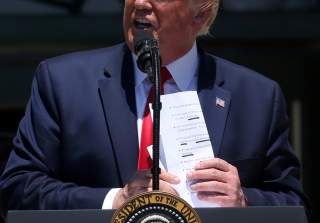 From the time he announced his presidential campaign a little more than four years ago, Donald Trump has proved that he is singularly more capable than any other individual at capturing and directing a news cycle. So far, he has managed to further cement his support in the Republican Party. Even as House Democrats attack Trump for making racist statements, some leading Republicans are dismissing their complaints, including a resolution decrying Trump’s tweets, as politics as usual. Sen. Lindsey Graham (R-SC) said that Trump could “aim higher” but also referred to several House Democrats as “communists.” House Minority Leader Kevin McCarthy (R-CA) said on Tuesday, “This is more from their bases about politics, and it’s unfortunate. We should get back to the business of America."

The weekend had begun with opposition infighting, caused by a tweet sent from the official House Democrats account. The tweet, carrying the implicit endorsement of the party structure, was responding to a comment from Saikat Chakrabarti, chief of staff to progressive darling Alexandria Ocasio-Cortez (D-NY). When Chakrabarti criticized a Democratic House member’s voting record, the House Democrats account responded by diminishing his position, shaming his lack of formal address, and instructing him to “keep her name out of your mouth,” interspersed with clapping emojis.

This exchange set off a powder keg in the Democratic Party between House Speaker Nancy Pelosi (D-CA), who is focused on keeping the party members unified heading into the 2020 elections, and younger, more progressive members who are looking for bolder stances against the administration. As William McGurn notes in today’s Wall Street Journal, some of the Democrats have been playing the race card—against each other. It began when Sen. Kamala Harris (D-CA) attacked Joe Biden in the second Miami debate, then continued when Ocasio-Cortez claimed that Pelosi was singling out women of color for retribution. According to McGurn, “there’s a certain rough justice that these Democrats today find themselves having to defend themselves against these accusations. Not because they are racist. But because so many have played the same vile card against equally guiltless Republicans and conservatives.”

The civil war between Democrats, however, lasted less than forty-eight hours before Trump succeeded in turning the attention and firepower of both sides toward him. “So interesting to see ‘Progressive’ Democrat Congresswomen, who originally came from countries whose governments are a complete and total catastrophe, the worst, most corrupt and inept anywhere in the world (if they even have a functioning government at all), now loudly and viciously telling the people of the United States, the greatest and most powerful Nation on earth, how our government is to be run,” Trump tweeted on Sunday morning.

The congresswomen the president was referring to were Ocasio-Cortez, Rep. Ilhan Omar (D-MN), Rep. Rashida Tlaib (D-MI), and Rep. Ayanna Pressley (D-MA). All four are women of color, Omar and Tlaib are the first Muslim women to be elected to Congress, and Omar was born in Somalia before entering the United States as an asylum seeker when she was a child. Of the four, Omar with her tweet on Israel—“It’s all about the Benjamins,” referring to $100 bills—is perhaps the most controversial.

Trump tweeted, “Why don’t they go back and help fix the totally broken and crime-infested places from which they came. Then come back and show us it is done. These places need your help badly, you can’t leave fast enough. I’m sure Nancy Pelosi would be very happy to quickly work out free travel arrangements!” Trump said.

The knives were out immediately. The lone black Republican in the House, Will Hurd (R-TX), called the tweets “racist and xenophobic,” while Senator Tim Scott (R-SC), the only black Republican senator, called them “racially offensive” and “unacceptable.” Democrats almost universally called the remarks racist, and the latest in a long line of racist behavior. Other Republican politicians and conservative pundits, even if too cautious to use the description of “racism,” found nothing redeemable in the low-grade insults.

“The Democrats were turning against each other and the four congresswomen Trump went after were making unforced errors of their own. For Trump to insert himself here made no sense at all,” commented James Antle, editor of The American Conservative.

Instead of wavering in front of the negative response, Trump doubled down. “So sad to see the Democrats sticking up for people who speak so badly of our Country and who, in addition, hate Israel with a true and unbridled passion. Whenever confronted, they call their adversaries, including Nancy Pelosi, ‘RACIST,’” tweeted the president Sunday night. “Their disgusting language and the many terrible things they say about the United States must not be allowed to go unchallenged. If the Democrat Party wants to continue to condone such disgraceful behavior, then we look even more forward to seeing you at the ballot box in 2020!”

In response, the four congresswomen held a joint press conference Tuesday afternoon. “This is simply a disruption and a distraction, from the callous, chaotic, and corrupt culture of this administration, all the way down,” said Pressley, using the phrase “the occupant of our White House” to describe Trump. This is reminiscent of how conservative critics treated a newly elected Franklin D. Roosevelt, referring to him as “That Man in the White House.”

“He does not embody the grace, the empathy, the compassion, the integrity, that that office requires and that the American people deserve,” Pressley concluded.

Omar listed criminal allegations against the administration. “This president, who has been credibly accused of committing multiple crimes, including colluding with foreign government to interfere with our election,” she said, referring to the discredited Trump-Russia espionage conspiracy theory. The special counsel investigation conducted by Robert Mueller that concluded in March could not prove that there was collusion between the Trump presidential campaign and a foreign government.

Proceeding to list the president’s previous verbal transgressions, Omar concluded that, “This is the agenda of white nationalists. Whether it is happening in chatrooms, or it is happening on national TV, and now it has reached the White House garden.”

Addressing the “love it or leave it” attitude of the tweets, Ocasio-Cortez explained why her and her colleagues’ critiques of current policy came from a good place. “[W]e don’t leave the things that we love. And when we love this country, what that means is that we propose the solutions to fix it,” she said.

Meanwhile, Tlaib reiterated her support for impeachment, a sentiment whose previous vulgarity led to its own pushback.

Immediately following the press conference, Trump took to social media. “We will never be a Socialist or Communist Country. IF YOU ARE NOT HAPPY HERE, YOU CAN LEAVE! It is your choice, and your choice alone. This is about love for America. Certain people HATE our country. They are anti-Israel, pro Al-Qaeda, and comment on the 9/11 attack, ‘some people did something.’ Radical Left Democrats want Open Borders, which means drugs, crime, human trafficking, and much more…” he tweeted in part.

While it might appear as though Donald Trump is digging his own grave, there is a method to the madness.

“With his deliberate, racist outburst, @realDonaldTrump wants to raise the profile of his targets, drive Dems to defend them and make them emblematic of the entire party. It’s a cold, hard strategy,” tweeted David Axelrod, chief strategist for both of Barack Obama’s presidential campaigns.

Antle agrees with this assessment, concluding that it’s the “[o]nly possible logic, aside from wanting attention.”

Trump’s latest tweet can be read as a summary of every unpopular issue he hopes to tag onto the Democratic Party’s backside. This includes the professed democratic socialism of Ocasio-Cortez and Tlaib, the near-unanimous promise of Democratic presidential candidates to decriminalize border crossings, Omar’s odd comments regarding Al Qaeda, including one that was interpreted as dismissing victims of the 9/11 terrorist attacks, and finally the surge of what appears to be anti-Zionism among some of the freshmen Democrats. Support for Israel has been a bipartisan consensus between both parties’ elite for decades, and while Nancy Pelosi is trying to keep it that way, Trump is trying to woo major Jewish donors into the GOP fold.

If Trump believes his unbridled attacks against the self-described “squad” of freshmen congresswomen will tar the Democratic Party in the long-run with unpopular positions in 2020, then the political fireworks have just gotten started.