History Provides Another Alternative to the All-Volunteer Force 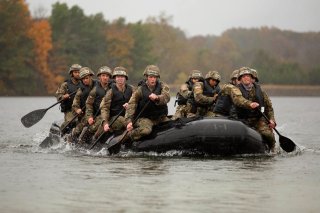 Is the all-volunteer force (AVF) sustainable? The inquiry has been asked before. With ever-increasing personnel costs and a growing divide between those who serve and those who do not, the long-term viability of the AVF is in question. Military observers such as Thomas Ricks have even argued that the success of the AVF in fighting the battles of the last several decades is reason enough to rid of the establishment force: it’s too easy for the nation to go to war with such an effective military. Recent opinion pieces have shed light on the continuing problem of servicemember entitlement and cultural enamoring over military service.

Others support continuing the AVF, even if in a different form than its current state. Many argue that the military has been changed for the better by a volunteer-based force in categories of intellect, capabilities, and an improved citizenry. In a previous commentary, Brandon J. Archuleta made the case for continuing the AVF, primarily arguing that not only is the military more effective within the AVF construct, but the alternative—a draft—is “not politically feasible, publicly acceptable, or militarily suitable.” Major Archuleta’s conclusion, however, assumes that conscription is the only possible alternative to the AVF.

This article provides a basic history of what was known as the Continental Army Plan during the 1915-1916 preparedness debates. Although not adopted, this plan was revolutionary in that it sought to establish a peacetime method of reserve military training prioritized over the maintenance of a large standing army. In doing so, its proponents highlighted a failed yet interesting alternative to the entangling debate of the AVF versus a draft.

With the outbreak of World War I in August 1914, a group of prominent U.S. political, civil, and military leaders provoked debate over the insufficient readiness of the armed forces. Led by Republican Congressman Augustus P. Gardner, his father-in-law Senator Henry Cabot Lodge, Army chief of staff Major General Leonard Wood, and former President Theodore Roosevelt, the group called for a “public searchlight” into the state of military unpreparedness as the European powers threw millions of men into the cauldron of battle. Despite rising concern over the nation’s capabilities, Woodrow Wilson, who as president entered office with an aversion to military affairs and professional soldiers, called talk of increased readiness a “good mental exercise” and denied the necessity for such preparations as throwing America “off our balance” by a distant European war.

The May 1915 sinking of the British luxury liner Lusitania by a German submarine, taking with it 128 Americans amongst the almost 1,200 lives lost, changed the calculus for Wilson. Following news of the horrific event, the president slowly came around to preparedness. In July, Wilson asked his secretaries of the navy and war to draft programs for a “reasonable and adequate” naval expansion and army legislation that was “in every way consistent with American traditions.” What did this mean? For decades, the United States had followed the general defense policy set forth in the early years of the nation. This Jeffersonian federalist system relied on a strong navy for commerce security and coastal defense as the first means of protection. As for the army, a small standing force helped protect the frontier and serve as a core cadre during periods of expansion. The primary pool of manpower during army expansion came from the state militias, which still held a level of autonomy from the federal government, and from raising volunteers. Just as quickly, these troops were demobilized and sent home following the conclusion of hostilities. This approach was in keeping with the so-called antimilitarist tradition of the founders and theoretically avoided the over-influential role of the military in society and politics. Yet the navy’s aging battleship fleet and the army’s 92,482 active-duty troops in 1914 paled in comparison to the million-man armies in Europe. Fearful of a state of neglect and un-readiness in the event the United States became involved in the European war, military professionals and key political leaders understood that change was due.

While his administration drafted proposals, Wilson looked to thread the needle between the varying desires of the citizenry. While many Americans wanted the government to take appropriate steps to improve the nation’s defenses following the Lusitania sinking, the majority of Americans did not desire war, nor did they desire drastic changes in the traditional U.S. defense posture. At the same time, the upcoming 1916 election weighed heavily on those in Congress, their constituents, the various preparedness and anti-preparedness groups, the president, and his administration.

Despite the interests of so many different groups, Congress passed multiple revolutionary bills in late summer 1916 that set America on a course toward serious military preparations, and much of the legislation passed without deep disagreement amongst the lawmakers or significant attempts to prevent enaction. The highlight was the naval appropriations bill, which authorized a three-year building program of ten battleships, six battle cruisers, fifty destroyers, over sixty submarines, and appropriated over $300 million for the effort, while also creating a federalized Navy and Marine Corps Reserve. Small-navy advocates attached a rider calling for a naval demobilization conference after the war, but that was no matter. In addition to the navy bill, Congress also established a Council of National Defense to advise on military-industrial mobilization and passed a shipping bill that reformed the merchant marine, an army appropriations bill, and a tax revenue bill to help pay for the increased military expenditures. Yet it was with the army reorganization plan where the Wilson administration was most visionary and ran into the most trouble.

Wilson’s secretary of war, New Jersey lawyer Lindley M. Garrison, started developing his plan prior to Wilson’s mandate in July 1915. In late August, he submitted “An Outline of Military Policy” to the president. Trouble became apparent, as Wilson and Garrison already did not get along—Wilson privately referred to his Secretary of War as a “solemn, conceited ass”—and the secretary’s submission lacked a detailed fiscal analysis. Moreover, Garrison suggested putting a feeler out to the press, which the president quickly denied, not wanting to expose the plan to early criticism and concerned about a more difficult time getting army legislation through.

Based on War College plans that recommended 500,000 men available immediately upon the start of hostilities, followed by another 500,000 mustered within ninety days, Garrison’s plan attempted to find a way to meet those needs. The secretary was reluctant to fully rely on the National Guard, which at the time did not consist of uniform standards of training and equipment. In many cases, soldiers were members of the National Guard on paper only. The militia force did have a powerful lobby, however, which would come to hinder the movement of Garrison’s plan.

In trying to balance the ends and means of army reorganization, Garrison’s plan called for a modest increase in the regular army to 141,843 soldiers. The National Guard would continue its role, albeit with additional federal support. But it was Garrison’s Continental Army that was the lynchpin of the whole effort. This force would be a third entity of army defense, made up of 400,000 volunteers raised in yearly cohorts of 133,000 for three years. Army chief of staff General Hugh Scott called the plan the “dream of military planners” for forty years. Essentially, the new Continental Army reserve soldiers would enlist for six years in which they would attend annual military maneuvers, be outfitted and equipped just as the regular army, and be ready to be the first wave, along with the regulars, of a half-million troops in the event of an emergency.

There were problems immediately upon Garrison’s submission of the plan, which Wilson approved and made public in early November 1915. First, Congressional leaders and the press wondered how the 133,000 yearly contingent of troops would be raised if not enough volunteers came forward. The National Guard strongly protested, pointing out that it already was a reserve force of 125,000 and could be amalgamated to fulfill the additional reserve requirement. States’ rights advocates worried that a more federalized reserve Continental Army would take away power and control from state governments and that Black volunteers would be enlisted. Garrison tried to counter anxiety from those concerned that the country was moving toward a militarist society, preaching that the nation must be assured “that they can cultivate the arts of peace behind a barrier of force,” but the strength of agitation was against him.

In early January 1916, when hearings began in the House Committee on Military Affairs, the Continental Army was in trouble. The secretary and Chief of Staff Scott were unprepared for the volley of questions brought forth by the Committee chairman, Representative James Hay, and the other members. When asked how the ranks of the Continental Army would be filled if not enough volunteers signed up, Garrison admitted that conscription may need to be used to meet the numbers. Whatever support existed for Garrison’s plan in the committee began to fade. Wilson, who saw the writing on the wall, acknowledged that he was not partial to Garrison’s proposal and would settle for something more politically viable. Not relenting on his effort, the secretary of war submitted his resignation in early February, which Wilson promptly accepted. The Continental Army Plan was dead.