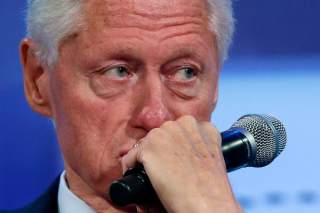 Tuesday was a terrible day for Donald Trump and an even more terrible day for the United States of America. For Trump, it has to be considered ominous when his former lawyer, Michael Cohen, implicates him in a federal crime by pleading guilty to a campaign-finance violation. The president's problem now isn't that he will be indicted in a federal court (he won't be, at least so long as he occupies the White House) or that he will be impeached by the House (he almost surely will be, but there's little likelihood the Senate will convict him). The big problem is that the president now sits in the legal crosshairs of special counsel Robert Mueller, and that reality will sap his presidency, rendering him increasingly hapless and ineffectual. If Trump had any prospects for a successful presidency before Tuesday, those prospects just fell precipitously.

America’s problem stems from the ambiguity that hovers over the president’s new legal situation. This ambiguity has two sources. First, Cohen says Trump instructed him to make hush payments to two women who said they had had affairs with the New York billionaire in years past. In pleading guilty to making those payments, Cohen accepts the government’s contention that they represented illegal campaign contributions, far in excess of federal limits on political contributions.

Consider the outcome when federal prosecutors brought a similar charge against Democratic presidential aspirant John Edwards in 2011. The allegation was that he allowed political benefactors to pay for extensive emoluments, worth up to $1 million, for Edwards’s mistress as an incentive to keep her quiet about their affair. The government alleged that the ultimate aim was to protect Edwards’s presidential viability by hiding the extramarital affair; hence, the gifts were a “payment in kind,” which constituted a campaign violation.

The jury in the case acquitted Edwards on one of the six counts against him and deadlocked on the other five. Shortly thereafter the government dropped its case. It seemed to legal experts that the government had failed to make a case that the payments were campaign-related, as opposed to being motivated by, for example, a desire to protect his reputation and his marriage.

Although there are differences in the two cases that could prove significant, the Edwards outcome represents a rather large rub in the Trump controversy because it’s almost always difficult to prove motivation, which resides in the deepest reaches of a person’s thinking. Perhaps there is strong evidence of what Trump was thinking when (or if) he authorized the two payments (of $130,000 and $150,000, respectively), but absent that, there will be lingering ambiguity.

The other area of ambiguity relates to the nature of the Mueller inquiry. In a normal investigation, law enforcement officials see evidence of a crime and then seek to determine who perpetrated it. In a special counsel investigation, on the other hand, the investigators start with a suspect (in this case, Trump) and then fan out in all directions seeking to prove he committed a crime. For many of these investigations, there is no limit in time or resources that can be devoted to the cause and very little limit in investigative scope.

The current case involving Trump poses a striking example. The investigation began with suggestions that Russia had tried to subvert the 2016 presidential election and that the Trump campaign may have engaged in "collusion" with those activities. That's a profoundly serious matter, deserving of an aggressive investigation. But the Mueller probe has meandered here and there, going after Trump associates on completely unrelated matters in hopes that those people might, conceivably, just possibly implicate the president in wrongdoing in areas far flung from so-called collusion. And now it has leveraged Cohen—clearly a man of questionable honesty and probity—to draw Trump into a legal thicket that failed spectacularly when it was used to ensnare John Edwards.

This investigative approach is troubling to many Americans because it raises questions about whether targets are simply kept in the crosshairs until something eventually turns up—however forced or flimsy. Americans don't want their presidents thrown out of office for reasons that don't rise to the ominous nature of the action. Removing a president—and reversing an election—is a big deal, in this view, and officials in Washington should treat it with proper solemnity and gravity.

Republicans learned that lesson the hard way when they sought to expel Bill Clinton from the presidency in 1998 and 1999 based on charges of perjury and obstruction of justice. Yes, the president clearly lied under oath. And, yes, he did so to cover up sexual behavior in the West Wing that appalled most Americans. But the GOP’s get-Clinton frenzy struck the electorate as out of proportion to the alleged crimes. The Senate declined to convict the president, and Democrats gained slightly more seats in both the House and Senate at the next election even as Republican George W. Bush captured the White House.

In today’s investigative drama, the intertwined elements of ambiguity will serve similarly to drive a wedge through the American body politic. Let’s stipulate here that new revelations could obliterate the ambiguity and swing the country around to a strong sense that Trump must go. But so far that hasn’t happened, and so a country that seems hopelessly split down the seams is likely to become even more so.

However tenuous the Cohen allegation may be in legal terms, it certainly will serve as the impetus for impeachment proceedings in the House Judiciary Committee if Democrats take that chamber in November, as they appear likely to do. If Mueller endorses the allegation in a report to Congress, that will add even more impetus, perhaps enough to get impeachment articles embraced by a majority of House members and sent to the Senate.

In that event, the Senate is likely to demure, as it did in the Clinton case. But in the meantime, the issue will polarize America even more than it is polarized now. It will lower the level of citizen faith in its political institutions even below today’s level. It will leave Americans even more disgusted with politics than they are now. It will rattle and rile the nearly sixty-three million Americans who voted for Trump and who will accept the legal assault only if it proceeds without ambiguity or apparent legal artifice.

Richard Nixon resigned the presidency in 1974 when his political standing and legal defense both disintegrated. As this unfolded, political writer James M. Perry of the old National Observer wrote a reaction piece from vacation in the Finger Lakes region of New York State. Things weren’t good at his lake cabin, wrote Perry, explaining that the stove wasn’t working, the plumbing was amiss, the electricity faulty. “But the U.S. Constitution,” he assured his readers, “is working just fine.”

That mirrored the prevailing sentiment of the American people even after Nixon’s landslide 1972 reelection triumph had been wiped out and the president expelled from office. That sentiment got the country through one of its darkest constitutional crises and onto a road to political recovery and stability. The question facing the country now, as the course of coming events comes into view, is whether those events will solve a constitutional crisis—or exacerbate the one America is already in.

Robert W. Merry, longtime Washington journalist and publishing executive, is the author most recently of President McKinley: Architect of the American Century.