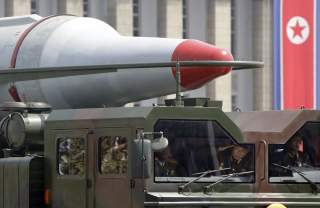 Will North Korean despot Kim Jong-Un give up his nuclear weapons in negotiations with President Donald Trump? Says the Magic 8 Ball:

Outlook not so good.

Dispute the Magic 8 Ball at your peril! History and strategy augur against Pyongyang’s surrendering its nukes.

Since the inception of the atomic age only Belarus, Ukraine, Kazakhstan, and apartheid South Africa have dismantled working arsenals. And South Africa was a zany case in atomic diplomacy. The apartheid regime covertly developed an inventory of some six tactical nukes during the 1970s. Its ostensible purpose: to empower Pretoria to threaten to use unconventional weaponry in neighboring Angola, where Cuban troops had deployed in force, or to face down guerrilla activity on the part of the South West African People’s Organization and the African National Congress (ANC).

The chief purpose of the South African arsenal, though, was to blackmail an ally. Should the apartheid regime face destruction, Pretoria planned to divulge the existence of its nukes in three phases. In phase one it would assume a posture of nuclear ambiguity, refusing to confirm or deny the existence of its arsenal while leaking the news that it indeed possessed one. In phase two, if South Africa confronted some overwhelming threat such as invasion, Pretoria would confidentially reveal the arsenal’s existence to Washington and allied Western capitals.

In so doing, went the theory, it would strong-arm the West into siding with Pretoria lest South Africa fall to communism. And in phase three, if a full-scale invasion loomed, the pariah state would threaten to conduct an underground nuclear test as a “last step.” In short, the pariah state sought to force the United States to back it by threatening to commit suicide—and take much of southern Africa with it. Holding yourself hostage is a zany strategy, worthy of the great Sheriff Bart.

Kim Jong-Un’s Hermit Kingdom might be crazy enough to follow the South African lead—but don’t bet on it.

Ukraine disarmed after the Cold War under an international pact known as the Budapest Memorandum. Kiev agreed to forfeit an arsenal numbering 1,900 Soviet strategic nuclear warheads, between 2,650 and 4,200 Soviet tactical nuclear weapons, 176 Soviet intercontinental ballistic missiles, and 44 strategic bombers in exchange for a pledge from Moscow, Washington, and London to “respect the independence and sovereignty and existing borders of Ukraine” and “refrain from the threat or use of force” against that former Soviet republic.

Ukraine denuclearized by 1996—and doubtless would love to have that decision back after bearing the brunt of Russian armed aggression in recent years without the luxury of nuclear deterrence. That experience probably holds little allure in Pyongyang. The lesson the Kim regime should draw is: disarm today, expose yourself to predatory neighbors tomorrow.

Which leaves Belarus and Kazakhstan. Moscow and Minsk inked an accord in 1999 creating a “Union State of Belarus and Russia.” Not much need to deter a domineering Russia when you’re that cozy with it. Kazakhstan consented to the removal of 1,410 Soviet strategic nuclear warheads from its soil after the Cold War, along with an undisclosed number of tactical nukes. Astana joined Minsk and Moscow to comprise the Eurasian Economic Union in 2015. It appears comfortable with its relations with Russia and, like Minsk, sees little need to face down the ex-Soviet master.

What guidance should Pyongyang draw from post-Cold War history? That it’s safe and even beneficial to disarm if Russia has no historical claims on your territory. And indeed, the Kim regime appears to harbor few fears of Russian or Chinese aggression. It harbors lurid fears of the United States and its Asian allies. In all likelihood, then, Pyongyang finds the cases of Belarus and Kazakhstan moot, and it sees itself playing the part of Ukraine in the other analogy.

In other words, North Korea believes it needs a deterrent to discourage cross-border aggression and dismemberment. So history has stacked the odds lopsidedly against disarmament. When Kim peers into atomic history he’ll see one outlier (South Africa), two inapplicable cases (Belarus and Kazakhstan), and one case (Ukraine) in which a government disarmed and came to regret it. That reading of history implies he will—and, from the standpoint of his personal longevity, should—keep his nukes.

Nor will strategic calculations buck the tide of history. Look at things from Kim’s vantage point. In broad terms the U.S. antagonist has two options, nuclear and conventional. Do nuclear threats from Washington carry much weight? Yes and no. Yes, in the sense that anyone who carries out a nuclear strike on the United States or its allies will summon forth a nuclear counterstrike as surely as night follows day. An assured second-strike capability constitutes the keystone of deterrence.

But no: first use of nuclear weapons is another matter entirely. Washington never foreswore launching first during the Cold War. But it would have done so only if U.S. allies stood on death ground, presumably in case of a Soviet invasion of Western Europe or to face down Soviet nuclear coercion or an actual attack. In other words, it have done so in reply to a first move from the Warsaw Pact—then and only then.

But initiating the use of force? That’s another question. As Henry Kissinger defined it in The Necessity for Choice, deterrence is a product of capability, resolve to use that capability under certain circumstances, and the adversary’s belief in our capability and resolve. American resolve to carry out a first strike against the North Korean nuclear arsenal would remain in doubt because it is so foreign to U.S. strategic traditions. Whether Kim Jong-Un would credit threats emanating from Washington is dubious in light of that history.

After all, the Truman administration dismissed General Douglas MacArthur, one of its greatest captains, from command of UN forces during the Korean War. MacArthur espoused using tactical nukes to terminate China’s intervention on the Korean Peninsula. President Harry Truman blanched at the prospect of an atomic exchange. Seven decades hence, Kim Jong-Un might expect President Donald Trump to do the same—and justifiably so.

What about the conventional option? Use the Korean War as a metric. When North Korea invaded the South in 1950, Truman hastily assembled UN forces to repel the assault. By 1953, when the combatants agreed to an armistice, America had expended some 37,000 military lives to restore South Korean sovereignty south of the 38th parallel. It’s hard to see how U.S. forces could forcibly disarm North Korea today for a lesser price than they paid in the 1950s.

The United States has incurred some 7,000 military deaths to vanquish Islamic terrorism since 9/11. Do Americans want to disarm North Korea enough to pay over five times the sum they paid during the War on Terror? If so, it’s not obvious from reading polling data. Recent Gallup polls show that Americans see North Korea as the United States’ greatest enemy. Some 51 percent of respondents designate the North as the chief foe. China, Russia, and Iran combined account for the remaining 47 percent of responses.

But think about it. Just 16 percent identified North Korea as the greatest enemy in 2016, a mere two years ago. That suggests the popular mood fluctuates with the latest headlines. Passion to take on Pyongyang has surged along with the latest nuclear crisis—and could subside as suddenly. Nor have President Trump or his advisers done much to rally the populace for an endeavor that could cost five times what the nation has paid in Afghanistan, Iraq, and Syria, or equal to what it paid to keep South Korea free decades ago.

Under these circumstances the North Korean tyrant can be forgiven for deprecating American willpower to exercise the options before the Trump administration, the American people, and the U.S. armed forces. Nuclear powers seldom relinquish their arms. Nor should we expect them to. That insight should guide U.S. strategy going forward.

Such is the nature of the second nuclear age, when the weak possess nukes of their own—and can defy the strong.

Image: North Korean soldiers salute in a military vehicle carrying a missile during a parade to commemorate the 60th anniversary of the signing of a truce in the 1950-1953 Korean War, at Kim Il-sung Square in Pyongyang July 27, 2013. REUTERS/Jason Lee