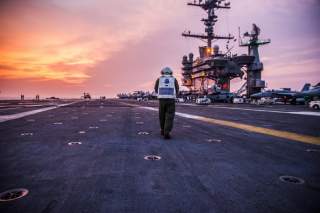 Many Americans believe that the United States and China have entered a long-term strategic competition. The way we use “competition” in many ways resembles a literary trope. At the US Naval War College, for example, we teach several historical case studies explicitly built around this narrative: Where a “rising power” challenges the “hegemon,” and its aggressive bid only increases tensions that at some point lead to military conflict. This is the story as much with Athens and Sparta in classical Greece as with Britain and Germany in the early 20th century.

The limitation of such historical analogies is in how, perhaps unwittingly, they create for us expectations that only go in one direction. It might be more helpful to contrast America and China today with a strategic competition that did not lead to war. This sort of comparison encourages us to test our dynamics against similar forces within an historical situation that—however strategically alarming at the time—did not end in war. Is our situation similarly stable (at a deep level), or should we really be worried?

Because the US—in the midst of civil war—was in “existential mode” and on a strategic hair-trigger. Britain was supplying high-tech weapons to the Confederacy, and also the delivery vehicles to get them past the Union blockade. Worse yet Britain (along with France) might recognize the Confederacy at any moment. In the eyes of the Lincoln administration, Britain was a real strategic threat.

This is why the Britain-US analogy (as in the verse fragment above) is relevant: China is challenging the US; the US is actively containing China across a great ocean; disputes between China and US local allies threaten an incident, followed by crisis; both nations feel threatened by each other; and thus, both countries increasingly see each other as strategic threats. Plus, both nations fought each other in bloody war just a couple long generations back, in Korea, just like Britain and the US did in 1812.

But if Victorians seem too far-fetched and fantastical to tell us anything about today, the Trent crisis is still the best metaphor we have for thinking through our strategic naval situation with China. The most important question it asks us is this: When USS  San Jacinto stopped and boarded a British flag vessel (Royal Mail Steamer Trent), forcibly (and illegally) removing Confederate envoys to the United Kingdom and France, why was there no war?

Remember, a lot of people on both sides of the Atlantic wanted war. Amanda Foreman’s book—A World On Fire—describes this amazingly intense Anglo-American crisis, much worse that anything that has happened yet between the US and China. But war did not happen.

Here are ten reasons why war between Britain and the US did not happen. In contrast, stacked like historical cordwood, are ten darker indicators why war—despite everything we say—might just happen between the United States and the Peoples Republic of China.

Number 1: Easy but overlooked—British elites simply had no narrative of war with the US in 1861. Do no discount this factor. In every war ever fought, “The Narrative” is the biggest (and the deepest) factor in the decision to go to war. Because there was no developed canon of a British-American War, there was no constituency in place for conflict, and no collective expectation waiting to be activated.

There was not even a popular press playing out war stories about fighting Americans. Not so today. The narrative is strong like a drumbeat, and everywhere you can read the likes of “America’s Coming War With China.” War has not only been imagined, it already has its dramatic framing. In a score of breathless—“what would war look like”—media narratives, it has already been imagined. For their part, the People’s Liberation Army (PLA)/ People’s Liberation Army Navy (PLAN) is lashed on by the dark symbols and legacies of the century of Chinese shame and degradation—to ring in a restoration of Chinese greatness.

Number 2—The British Empire was acutely aware of its military and strategic limits. The US should be equally circumspect and cautious. We are concluding two costly wars. Like Britain expending itself in the 1850s in the Crimean War and the Indian Mutiny, our adventures in Iraq and Afghanistan scream “never again” (or at least for awhile). Yet unlike Victorian Britain, which only responded episodically to foreign naval challenge, the US’s defense realm represents a giant and permanent war establishment deeply invested in making any military threat a productive basis for its own budgets and way of life going forward, year‑after‑year. The Air-Sea Battle concept has already framed this productivity—against China. The Admiralty had no such marketable narrative in 1862—nor did it want one. It would be another decade before Britain had the world-beating naval package it needed—and then America’s threat was gratefully gone. Our defense establishment says it sees limits, but it dearly loves the steady threat that makes limits recede. By making East Asia the centerpiece of our national security, the US government has officially announced a complete threat-based business plan well in advance of the IPO.

Number 3—The British Empire saw the fragility of their global economy.  In 1861, war with the US would be an economy-collapsing event. The empire’s mill economy was built on cotton, hence the height of UK-US crisis was also the height of hysteria in Britain over the loss of King Cotton. The Federal’s blockade of the Confederacy threatened to sink the fiber lifeblood of the British economy. It took two years to relocate cotton production to the imperial safety of Egypt.

You might think that Americans worry equally over the economic consequences of a US-China war—but no one says they are so bad we cannot fight. Sure, our economy will take a hit bigger than 2008. But there are so many adjustments we could make. Before 1914, globalization seemed to make big war impossible. But when war came—in spite of the economic hit—everyone adjusted, enough to fight for four years. Economic fears are not a brake on war.

Number 4—The United Kingdom was not desperately seeking its next world-historical enemy. The American civil war highlighted British political fissures, with landowning Tories tending to side with the South and Midlands mill men with the North. But no mid-Victorian thought that Britain’s world position needed a long-term enemy. Even Russia—always a giving enemy—had been thrashed by Britain just five years past.

But Americans today need that Manichaean foe: “German Militarism,” “Nazism,” “Godless Communism.” In purely practical terms, since 1950 what this has meant is a national psyche built around a giant, needy, permanent war establishment. Ever since the Soviet fall we have prayed for such an enemy— but from Japan in the 1980s to Iran to “Radical Islam” and a new Russian bully—but all prospects have failed us. Today only China could hope to meet such a standard. And there is still a strong national constituency and lots of American emotion behind finding a big enemy—and maybe even more in China. Watching Chinese war soap operas, aired 24/7, where Japanese soldiers are battle-slaughtered endlessly in a kind of mythopoeic TV-blood sacrifice, we glimpse the narrative passion of the next war.

Number 5—1861 America had a hot, high-tech super-weapon that was a Capital Ship Killer. The dreaded US naval threat was an instant icon of the industrial age, the eponymous Monitor, whose massive turrets, clad in iron, held the super-weapon. The super-weapon was the Dahlgren 15” gun, 43,000 lbs. of cast iron, whose 440 lb. forged shot could smash its way through the toughest wrought iron and oak walls of even the grandest British battleship, the newly-commissioned ironclad, HMS Warrior. Yet with its puny 68pdr. cannon, Warrior could barely dent a Monitor turret. Britannia’s proudest flagship: Prostrate before Yankee hi-tech and a gung-ho crew. Is this in any way different from the anxious dreams of US naval leaders, watching the Chinese DF-21D anti-ship ballistic missile (ASBM), that at least in theory, could slice clean through a U.S. carrier, from flight deck to floor, breaking its back and sending it to Pacific seabed? And if the PLAN today is popping out ASBM’s by the hundreds, in 1862 the Union had a 30-monitor building program, all with 15” Dahlgrens. If Royal Navy battleships closed on American coasts, they would be sunk. Let’s call it anti-access, area denial, 1861-style.

But there is, again, a difference. The Monitor created only a bounded, limited strategic liability for the UK. This means that to actually meet the new weapon in battle, the Royal Navy would have to closely invest US ports; in other words, existentially threaten US economic life. Beyond this narrow offshore realm, US monitors posed absolutely zero threat to British economic or strategic interests.