Hodeida Is Not a Yemeni Affair 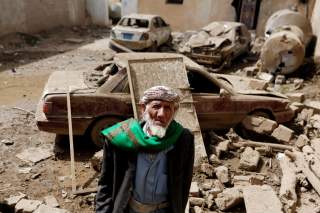 Troops supported by Saudi Arabia and the United Arab Emirates are fighting their way into the Yemeni Red Sea port city of Hodeida after months of slow advance. There is hope that Operation Golden Victory will free the city from the grip of the Houthis' Ansarullah militia that has controlled Hodeida since 2014. Local and international relief organizations have warned against complicating the dire conditions prevailing in the Arab world's poorest country since about 70 percent of humanitarian assistance passes through Hodeida’s seaport. But in addition to the horrendous impact of the military assault on the city, what is feared is that the battle for Hodeida is being fought for another purpose—to implement full Saudi Arabian-Emirati control of Yemen.

The fight over Hodeida would best be considered as an effort to improve Saudi and Emirati field positions ahead of future negotiations. This is because the new United Nations envoy Martin Griffiths––who was appointed in February 2018 to succeed Ismail Ould Cheikh Ahmed––is marketing a peace plan to end the country’s crisis of civil war and outside intervention. This new plan proposes a ceasefire and the surrender of all medium and long-range missiles by non-state actors such as the Houthi militia Ansarullah and allied militias. It also calls for the formation of a transitional government to be headed by a mutually agreed-upon prime minister and to include all political factions. The plan, however, realistically postpones such issues as constitutional changes, electoral arrangements, and reconciliation, all of which will be addressed during the transition.

The Battle for Hodeida

Hodeida has emerged as a focal point in the Saudi-led coalition's maneuvering to strengthen its hand vis-à-vis Ansarullah and subsequently to pave the way for a victory in Yemen. Hodeida is a significant hub for the Houthis and is two-hundred-and-thirty kilometers west of the capital Sanaa. The Saudi-led coalition accuses the Houthis of using Hodeida to smuggle in rockets to attack shipping lanes and Saudi territory. For instance, a rocket attack on the kingdom occurred on June 9 in which three civilians were killed. Thus, controlling Hodeida means displacing the Houthis from a strategic position along the western coast, using the city as a major base of operations, and helping to end the missile threat to Saudi territory and population centers.

Second, controlling Hodeida will further help the overall military situation concerning critical strategic points such as Sanaa, Taiz in the center of the country, and Houthi strongholds in the north. In fact, UAE Minister of State for Foreign Affairs Anwar Gargash intimated that winning the Hodeida battle will likely determine the end of the whole Yemeni war. If the Houthis’ supply line from Hodeida is cut off, the argument goes, it would then be easier to concentrate on those areas to break their grip—a prospect that could very much help coalition forces in future negotiations.

On the other hand, controlling Hodeida may have some unwarranted implications for Saudi Arabia and the UAE. Controlling the city and its facilities would by default make them entirely responsible for the distribution of massive amounts of aid to at least 8 million Yemenis and others at risk of starvation. They would presumably no longer be able to accuse the Houthis of perpetuating the humanitarian crisis in the country because of their mismanagement of international humanitarian assistance. But due to typical combat situations, no matter how organized the distribution effort would be no one can be sure that it will be executed properly. Besides, the ongoing humanitarian disaster in the country is as much the responsibility of the Saudi-led coalition as it is that of the Houthis, and claiming that occupying Hodeida will change that may be wishful thinking.

Indeed, as UN envoy Griffiths considered the fate of Hodeida and the people who depend on its maritime facilities, he warned against the operation to take the city, saying it would also impede negotiations in advance of his putative peace plan. Instead, he proposed that the Houthis spare the city and its port facilities and leave its supervision to the United Nations, an idea the Ansarullah militia thought was worth discussing. But considering the seriousness with which the military operation seems to be conducted at present, in spite of the United Nations, the wishes of Griffiths are likely to be ignored.

Whatever the developments regarding Hodeida, Saudi Arabia and the UAE continue to be ambiguous about what they want to do in Yemen besides containing the Houthis, whom they consider to be Iran’s agents. The operation may be the first coordination of efforts following the Saudi-Emirati Coordination Council’s first meeting in Jeddah on June 6. That council was established between the two countries in December 2017 for conducting the war. Specifically, there is still ambiguity about where they stand on restoring to power the legitimate Yemeni president, Abdrabbuh Mansour Hadi, and his government. Hadi was reportedly under house arrest for an extended period in Riyadh and was prevented by the UAE from returning with his government to the southern city of Aden, which he had made his capital after being driven out of Sanaa.

Having flown back to Aden on the eve of the Hodeida operation, President Hadi is rumored to have been forced to accept and endorse the campaign. His endorsement lends legitimacy to Saudi-Emirati plans for the city and beyond, but he may very well be on his way out. It is possible that Ahmed Saleh, the son of the late president Ali Abdullah Saleh, may be next in line. Ahmed Saleh, who was also a one-time commander of the Republican Guard and ambassador to the UAE, has taken up the mantle of avenging his father’s assassination last December at the hands of the Houthis. Moreover, this is when it became evident that the president was planning to sever his association with them. For instance, following the assassination a special relationship developed between Ahmed and UAE’s strongman, Abu Dhabi Crown Prince Mohammed bin Zayed, who had allowed him to take up residence in his country.

While Ahmed’s cousin Tareq is leading the Hodeida offensive, it is Ahmed whom the Saudis and Emiratis trust fully, although the two can be said to be interchangeable as Yemen's leader for Riyadh and Abu Dhabi. But for Ahmed to be accepted internationally, he needs to escape United Nations and American sanctions imposed on him for working against Hadi’s government. Ironically, and not too strangely considering Yemen’s dependence on Saudi Arabia, the Yemeni government vowed last March to ask the UN to lift its sanctions on Ahmed Saleh. In fact, Hadi’s return to Aden, without full freedom of action, may be seen as a prelude to easing him out by Saudi Arabia and the UAE in favor of the younger and tribally better connected Ahmed Saleh. Victory in Hodeida is thus pivotal.

But this potential scenario is likely to be complicated by the UAE’s relationship to the Southern Transitional Council (STC), which is working to secede from the Yemeni republic. Since 2015, when Emirati forces reclaimed the southern city of Aden from the Houthis, the UAE has not shown much concern for the obvious contradiction between working within the Saudi-led coalition to restore Hadi and supporting the STC’s hope for secession. But considering Hadi’s weakness, this contradiction may be easier to iron out with Ahmed Saleh who, because of his tribal and institutional strength, could co-opt the STC with future government positions or even promises of more southern autonomy in a federated Yemen. In that possible scenario, Saudi Arabia and the UAE would get a friendly Yemeni president fully beholden to them. In addition, Yemen would remain unified to allay Saudi fears of its breakup and instability, and a future President Saleh would continue to prosecute a vendetta against the Houthis.

Other developments around Yemen further make the country the focal point of a regional master plan benefiting both Saudi Arabia and the UAE, although the latter can be said to have been more adept at strategic maneuvering. In May, the UAE landed military personnel and equipment on Yemen's Socotra Island—at the entrance to the Gulf of Aden and the tip of the Horn of Africa—without the knowledge or permission of the Hadi government. Vociferous objections by Hadi's lieutenants and the island's inhabitants necessitated a direct Saudi intervention, one that may have assured a peaceful resolution but also allowed Riyadh and Abu Dhabi to control the island. Socotra has actually disappeared from public discussions. The UAE has also extended its commercial and military relations to two wannabe Somali breakaway regions—Somaliland and Puntland—and to Djibouti and Eritrea. This is a clear plan by the UAE to control the vital Suez Canal-Indian Ocean corridor centered around Yemen’s Bab al-Mandab waterway.

While UAE overtures to the central governments of Somalia and Djibouti may have eventually failed, the overall momentum of this planning is ambitious and daring. With Hodeida in the hands of the UAE and UAE-supported troops, it is not hard to see how the Saudi-Emirati Coordination Council will have effective control of Yemen. This will make the mission of the United Nations' Griffiths even harder because it envisions an equal role for all of Yemen's factions in the overall political deal to end the country's war—including the Houthis. But if the Saudi-Emirati control over Yemen's decision-making becomes a reality, it is unlikely that the proposed plan will have a chance.