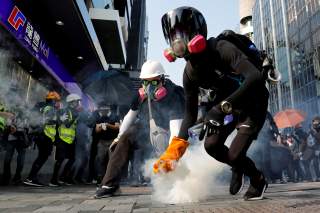 In December 2004, the Heritage Foundation’s Hong Kong office hosted a speech by Henry Hyde, Chairman of the then-named House International Relations Committee (now the Foreign Affairs Committee.)    Hyde, a veteran of World War II who fought in the battle for the Philippines, had an abiding personal interest in post-war political developments in Asia, including the challenges posed by a rising China. In his remarks, he saw political developments in Hong Kong as a key test as to whether Beijing would emerge as a responsible stakeholder or, alternatively, an authoritarian threat in the 21st Century.

Speaking of Hong Kong, he said: “Many years ago, those laboring in mines deep underground, faced the deadly problem of the buildup of fatal but undetectable gases.  To warn them of approaching danger, they would bring with them a small and fragile bird, imprisoned in a cage, which became known as the miners’ canary…Hong Kong is the miners’ canary.  Its vulnerability makes it an unmistakable indicator of the course of China’s historic transition and the impact it will soon have on us all. We must watch carefully.”

Hyde died in 2007.  Yet his words of caution remain relevant for Americans today.  These include President Trump who, according to a CNN report on October 4th, made another questionable promise on Hong Kong in one of his now-famous phone calls to global leaders:  “During a private phone call in June, President Donald Trump promised Chinese President Xi Jinping that the US would remain quiet on pro-democracy protests in Hong Kong while trade talks continued.”  CNN further reported that the State Department told then-U.S. Consul General in Hong Kong, Kurt Tong, “to cancel a planned speech on the protests in Washington because the President had promised Xi no one from the administration would talk about the issue.”

Facebook CEO Mark Zuckerberg and NBA star LeBron James should also take heed.   Their concerns for human rights and the rule of law are blinded by what Chairman Hyde called in his 2004 speech “the fool’s gold of pure selfishness” – in this case, the glitter of Chinese gold.  Zuckerberg, seeking a breakthrough for Facebook in China after it was blocked in 2009, bought several copies of China strongman Xi Jinping’s book on governance in 2014, so that “he and (his) colleagues could learn about socialism with Chinese characteristics,” according to a December 9, 2014 article in the South China Morning Post.

And LeBron James more recently got caught in the awkward position of appearing to excuse Beijing’s current crackdown in Hong Kong in some ill-advised online comments.  This happened soon after a high school student protester was shot in the chest by police on China’s National Day, October 1st, in an eerie echo of the Tiananmen Square massacre, and prior to a leader of Hong Kong’s pro-democracy movement being hospitalized after an assault on the street by thugs with hammers.  Commenting on LeBron James’s remarks, one disappointed Hong Kong protester told the Associated Press on October 15th: “Please remember, all NBA players, what you said before:  ‘Black lives matter.’ Hong Kong lives also matter.” Perhaps all three -- Trump, Zuckerberg, and James -- need to take their quotes more from Chairman Hyde and a little less from Chairman Mao.

The spin doctors in Beijing did not care very much for what Hyde had to say in his speech. UPI reported on December 6, 2004 that a Chinese Foreign Ministry spokesperson said that Hyde had “viciously attacked China’s development and progress, and insulted China’s foreign policy from his own Cold World view.”

So, what exactly did Hyde say about Hong Kong back in 2004 that drew such ire from Beijing?   Hyde noted that “in sharp contrast with Taiwan, where political reform and liberalization enjoyed sustained government sponsorship, in Hong Kong the push has had to come from the people themselves, with the government actively attempting to slow or stop altogether any further advance.  I am certain that the standoff that has arisen is dispiriting to many here, especially as the prospects for further progress remain uncertain…Clearly, the commitment to democracy has already sunk deep roots.”

If the situation looked uncertain back in 2004, it looks downright gloomy in 2019.   Reuters reported on September 30th that “last month, Beijing moved thousands of troops across the border into this restive city. They came in on trucks, and armored cars, by bus and by ship. “   Three diplomatic envoys told Reuters that “the contingent of Chinese military personnel in Hong Kong had more than doubled in size since the protests began.  They estimate the number of military personnel is now between 10,000 and 12,000, up from 3,000 to 5,000 in the months before the reinforcement.  As a result, the envoys believe, China has now assembled its largest-ever active force of People’s Liberation Army (PLA) troops and other anti-riot personnel and equipment in Hong Kong.”

Chairman Hyde foresaw this coming, as he remarked that “Hong Kong has become an arena for an unavoidable struggle, one with global implications, where rival forces are locked in a battle to determine which of their visions for China’s political evolution will prevail...If we assume that chaos or repression are unacceptable outcomes to both sides, the question becomes:  Is there a route by which Hong Kong can become increasingly free and democratic without challenging the regime’s ultimate authority and thereby provoking a forcible response?” Chinese leader Xi Jinping seemed to answer Hyde’s question in the negative during a recent trip to Nepal. In the face of the ongoing unrest in Hong Kong, Xi warned that any effort to split China will result in “bodies smashed and bones ground into powder,” according to Hong Kong Free Press.   Hyde concluded at the end of his speech, if the repression of civil liberties in Hong Kong was China’s response, that “enamored of an aggressive and intoxicating nationalism, it would soon wreak havoc on the world.”

One result of the current political crisis in Hong Kong has been the exposure of Beijing’s formula of “one country, two systems” as a fraud.  Beijing has been steadily seeking to undermine this pledge made at the time of the 1997 reversion of Hong Kong from British to Chinese rule.

Under the Basic Law, based upon the Sino-British Joint Declaration of 1984, Hong Kong was to be a special administrative region (SAR) with its own capitalist economic system, its own currency, its own legal and legislative system, and a guarantee of the people of Hong Kong’s rights for fifty years.  Yet Beijing and its surrogates in Hong Kong have sought to erode these guarantees by such means as the 2003 controversy over the since withdrawn national security measures contained in Article 23 of the Basic Law, the use of Hong Kong immigration to restrict entry of human rights critics of the Beijing regime, and the kidnapping of Hong Kong sellers of books banned in mainland China.

According to a New York Times article of April 3, 2018,  “At a national Communist Party congress in October 2017, President Xi Jinping made clear the party’s expansive vision of control. ‘The party exercises overall leadership over all areas of endeavor in every part of the country,’ he told delegates. No corner of society was out of reach. Even books — ‘socialist literature,’ in Xi’s words — must extol ‘our party, our country, our people and our heroes.’”

Then there was the attempt by Hong Kong Chief Executive Carrie Lam, which triggered the current unrest, to ram through the Legislative Council a new extradition bill earlier this year (since withdrawn) which would make both the citizens of Hong Kong and visitors subject to the long reach of Chinese security forces.  The people of Hong Kong decided it was time to either stand up or fatalistically submit to creeping authoritarianism.

Another unintended consequence of the current unrest in Hong Kong has been to completely derail Xi Jinping’s proposal to use the “one country, two systems” formula to settle the Taiwan issue.  In remarks made at the beginning of 2019, Xi said that unification was the key to “national rejuvenation,” according to the South China Morning Post. “The political division across the strait cannot be passed from generation to generation,” he added.  Xi proposed the “one country, two systems” formula for Taiwan.  However, the people in Taiwan have been watching very closely the current political struggles of their Hong Kong cousins and, as a result, see “one country, two systems” as the equivalent of the spider inviting the fly into its web.

A further unintended consequence has been placing Hong Kong’s special status in U.S. legislation as a separate customs area with special trading status distinct from China at risk. The U.S.-China Economic and Security Review Commission, in a report to Congress last year, noted that Beijing’s “encroachment” on the city’s political system could diminish its standing as a global business hub and affect the export of American technology to the city.  The report recommended an assessment of the export control policy on technology “as it relates to U.S. treatment of Hong Kong and China as separate customs areas.”