Is Hong Kong China's Version of the Ukraine Crisis? 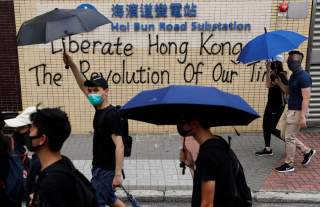 The Hong Kong crisis remains at an acute stage. Chinese troops are reported to be amassing in neighboring Shenzhen and angry, xenophobic editorials appear almost daily in the leading Chinese military newspapers. Meanwhile, human rights zealots the world over seem to wish to make the Hong Kong protests into a battering ram, which would spark the long-sought-after “Jasmine Revolution” towards democracy in China. Needless to say, it is far from clear that either the external advocates (many residing in Washington, D.C.) or the actual protesters themselves in Hong Kong, have thought this through very carefully. How does this end? The most likely outcomes will be violence and repression—hopefully not with war as well, but that awful possibility can hardly be ruled out. There is some reason to hope that the protests could be winding down now and we should all wish that “cooler heads will prevail.”

Amidst the flood of commentary on the economic, social, and political causes and consequences of the on-going Hong Kong protests, a particularly interesting analysis actually surfaced in the Russian press. That analysis compares the 2019 Hong Kong protest movement to the events of the Maidan in Kyiv that transpired during February 2014. Many will undoubtedly dismiss such a comparison as “Russian propaganda,” perhaps generated by a “bot.” However, such a shallow appraisal would miss a number of interesting and also candidly disturbing points of comparison. The article appeared under the headline “Maidan in Chinese. Will Beijing crush the protests in Hong Kong? [Майдан по-китайски. Подавит ли Пекин бунт в Гонконге?]” and was written by the columnist Ilya Polyansky for Military Review [Военное Обозрение].

Were not the Maidan protests themselves originally a primal holler for freedom? But the struggle was not simply against the immediate authorities—corrupted though they might have been. Rather, the main effort was to resist a more distant, but much more powerful, external controlling force—Moscow in the former case, and Beijing in the latter case. Unquestionably, both these crises, while sparked by internal political grievances, have very strong geopolitical overtones. Moreover, the deep fractures exposed in both cases accord well with the widening chasms characteristic of the New Cold War, featuring the freedom loving, boisterous West against the despotic, corrupt and supposedly declining East. Westerners have been told over and over again, according to our own teleological tradition, that we are “on the right side of history.”

Yet, before taking any more steps toward the “right side of history,” Hong Kong people may want to consult with the population in Ukraine to learn how it really is to be on the front lines of the New Cold War. After all, the people of Ukraine sadly have little to show for the Maidan exertions beyond increasing polarization, political dysfunction, economic stagnation, and yes both internal and external violence of a rather dreadful sort.

Polyansky does not make these points explicit, preferring to skate on the edge of the comparison. He says that the Hong Kong protests have now taken “an extremely dangerous form.” By seizing the airport, allegedly taking hostages, and with near chaos on the streets, Polyansky concludes: “The situation in this Chinese city more and more reminds one of the Maidan in Ukraine during 2013--14 [Ситуация в этом китайском городе все больше напоминает Майдан на Украине 2013-2014 гг].” The Russian author describes two separate instances when the crowds have actually seized mainland Chinese citizens, including a journalist, and allegedly beat them both badly, but fortunately were rescued by the police. Some readers may be surprised, however, to note that this Russian journalist admits that the level of support for “anti-government slogans” among the population of Hong Kong is remarkably high.

For those familiar with the Victoria Nuland episode and that American diplomat’s rather less-than-diplomatic intervention in Kyiv’s politics during the Maidan crisis, it is more than a little unnerving to learn that U.S. State Department personnel allegedly have been actively meeting with the Hong Kong protesters. Polyansky notes that Beijing has issued warnings to America regarding such meetings, but concludes: “The USA, as is well known, always demonstrates the tendency toward intervention in Chinese political situations, expressing support for Tibetans and Uighur national movements, and now with the Hong Kong protesters [США, как известно, постоянно демонстрируют тенденцию к вмешательству в китайскую политическую ситуацию, высказывают поддержку тибетским и уйгурским национальным движениям, а теперь и гонконгским протестующим.].”

The article features several pictures with Hong Kong protesters waving American flags. Perhaps that is appropriate given how many Washington elites and politicians have openly expressed support for the Hong Kong protests. Yet neither the protesters nor the Washington “blob” seems to have figured out that associating Hong Kong’s fate with the broader U.S. effort to counter China across the “free and open” Indo-Pacific is most certainly waving a red flag in front of a bull. Do the Hong Kong protesters think the United States will save them from China in the same way that America has “saved” Ukraine from Russia?

Polyansky explicitly draws attention to this problem when he discusses the matter of the proposed visit by two warships from America’s Seventh Fleet to Hong Kong. The visit was abruptly cancelled by Beijing and Polyansky cites the Seventh Fleet spokesman, who is said to have complained that the U.S. Navy has “always visited the port of Hong Kong in the past …” But the Russian observer explains: “In a situation where the city is in turmoil, the presence of American ships will be an unnecessary destabilizing factor. Moreover, protesters may even think that the U.S. Navy ships in the city’s port will become a guarantee against harsh police actions and will intensify their speeches [в условиях, когда город охвачен массовыми беспорядками, присутствие американских кораблей будет лишним дестабилизирующим обстановку фактором. Тем более, что протестующие могут вообще подумать, что корабли ВМС США в порту города станут гарантией от жестких действий полиции и еще более активизируют свои выступления].” Taking the analogy one step further, it likely would have been inappropriate to parade (even a couple) U.S. tanks down the Kreshatik in central Kyiv during the Maidan incident.

In the end, the Russian author concludes that Beijing has not sought a confrontation and has used significant restraint. He says, China “until recently, preferred not to interfere in the affairs of the autonomous city and hoped that the Hong Kong authorities themselves would be able to calm down the protesters [до последнего времени предпочитавшее не вмешиваться в дела автономного города и рассчитывавшее, что власти Гонконга сами сумеют угомонить протестующих].” He concludes that the main factor in Beijing’s calculations is actually the bigger prize of Taiwan, noting that, “If people on Taiwan see Hong Kongers crushed with tanks and those firing machine guns,” they will lose all “desire to integrate with the China …”

However, getting cynical, one could conceive of this process in reverse. It is possible that the Hong Kong crisis has encouraged the notion in the PLA and elsewhere in CCP circles that “one country, two systems” is permanently dead. That conclusion would mean Beijing believes now force must be used against both Hong Kong and Taiwan—with the latter requiring significantly more attention. Let’s hope this is not the prevailing conclusion in Beijing, but it might be. If Hong Kong unrest actually triggers a Mainland/Taiwan war, then the outcome of the Hong Kong protest will have been much worse than the bloody toll of the Maidan in Ukraine that ignited nearly five years of bloody civil war in east Ukraine.

Stepping back from the thought-provoking Russian article, let us consider two vital factors that are nowhere to be seen in the vast sea of Western analyses of the Hong Kong situation: geography and history. In this age of identity politics, identity always trumps. If Hong Kong people particularly like tea and crumpets, or cooing over the latest Royal baby pics, why shouldn’t they be British, after all? By the dictates of American liberal ideology, such expressions of self-determination are all the more welcome and may be fully validated on Twitter and other social media.

Yet, that is all a juvenile pipedream in the real world due to the continuing importance of history and geography—the twin pillars of realist thought. China has not forgotten that Hong Kong was indelicately detached from the Middle Kingdom as part of a most inglorious chapter in British colonial history that involved drug pushing on a massive scale at the point of a bayonet. But you will not see any mention of the long-forgotten Opium War in any of the recent coverage of Hong Kong by the leading Western papers. Never mind that Hong Kong would not exist were it not for this nefarious history.

Then, there is also the rather significant fact that the ranges of Chinese missile systems (based along the coast, at sea, and in the air) ensure without even a shred of a doubt that nobody—not even the vaunted Western alliance of the North Atlantic Treaty Organization—is coming to save the Hong Kong protesters if Beijing opts to use force. Western readers might easily forget the solemn geographical fact that Hong Kong is, after all, just another large metropolis located in southern China. Similar historical and geographical facts, more or less, pertain to Taiwan as well.