Hong Kong's Crisis Does Not Extend to Taiwan 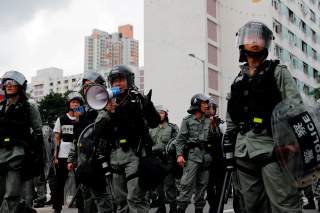 In recent weeks, hundreds of thousands of protesters have taken to the streets in Hong Kong, a Special Administrative Region (SAR) of China, to protest against a controversial extradition bill cobbled together by Hong Kong authorities with the support of Beijing. Much ink has been spilled trying to explain the significance of the demonstrations. Some analyses are solid efforts that contribute to the conversation. Others are not—particularly those that somehow try to link the Hong Kong experience to Taiwan. Taiwan is not Hong Kong.

Hong Kong was a British colony for over a century—it consisted of territories stolen from imperial China at different times during the nineteenth century (Hong Kong Island, Kowloon Peninsula and the New Territories). It was never a sovereign, independent state. The colony’s governor was selected by London—he was never elected by the people and Hong Kong was never a democracy. Moreover, the Hong Kong people had little or no say in determining the terms of the “handover” to mainland China in 1997. Since 1997, this SAR has been intended to serve as a show piece for Beijing’s “one country, two systems” reunification formula. The scheme was also applied in Macau, a former Portuguese colony. It has received mixed reviews in both SARS.

The Republic of China (Taiwan’s official moniker) was formally established on January 1, 1912. Since that time, its territory and political system has changed dramatically. For example, during World War II, the central government moved from Nanjing to Chongqing. During the Chinese Civil War, the government was compelled to move several times before finally landing in Taipei in 1949. For seventy years, the government in Taipei has controlled Taiwan, a handful of small islands such as Kinmen and Matsu (widely acknowledged as part of Fujian province) and the best piece of real estate in the South China Sea (Taiping Island). For almost a quarter of a century, Taipei occupied the Chinese seat in the UN’s Security Council and was recognized by most governments as the legitimate government of all China. And like the United States and many other countries, the governmental system has changed dramatically in recent decades. Taiwan has transformed itself from a staid, authoritarian dictatorship into a boisterous, multi-party democracy. Despite numerous challenges and triumphs, the Republic of China on Taiwan remains a sovereign and independent state. Hence, the differences with Hong Kong are enormous and striking—a fact which led Ma Ying-jeou, then Taiwan’s president, to declare in 2014 that Hong Kong’s experience with the “one country, two systems” model is “completely irrelevant” to Taiwan.

Given such glaring differences, why do some make the mistake of claiming Taiwan is inexorably linked to a former British colony? As it happens, this muddled thinking is shared by some in Beijing who make the same argument.

Forty years ago, Beijing dropped its threats to “liberate” Taiwan and offered Taipei a nine-point proposal under the “one country, two systems” reunification formula. The arrangement would purportedly allow Taiwan to maintain its political system, private property rights, armed forces and way of life. High-ranking officials in Taipei would be allowed to take up “posts of leadership” in the Beijing government. At the time, mainland authorities suggested that most points were negotiable and should be viewed only as an opening position. To this day, however, Beijing has never explained which points are negotiable and which are not.

Chiang Ching-kuo, then Taiwan’s president, was not impressed with the mainland Chinese proposal. His administration replied that Taipei would pursue a “three no’s policy” (no official contacts, no negotiations and no compromises) until mainland authorities met two critical preconditions for reunification discussions. First, the mainland must renounce communism. And second, it must accept Sun Yat-sen’s Three Principles of the People. The popular president’s position met with widespread approval in Taiwan. And forty years later public opinion polls show that Beijing’s reunification proposal continues to find no market in Taiwan.

So, it is clear that Taiwan’s people reject “one country, two systems.” Not surprisingly, all of the island’s politicians oppose it. In fact, on June 15, Han Kuo-yu, Kaohsiung’s charismatic mayor (and presidential hopeful), loudly declared that the reunification formula would be applied to Taiwan “only over my dead body.”

One should not jump to the lazy conclusion that the sentiments such as those expressed by Han and others mean that Taiwan’s people support policies hostile to the Chinese mainland. For example, scientific polls such as the Taiwan National Security Survey consistently show that most Taiwanese support conducting cross-strait relations under the broad “one country, different interpretations” framework—commonly known as the “1992 consensus.” This is because it is not a reunification formula or even part of one. Rather, it’s a modus vivendi enabling the two sides to maintain peace and stability while moving relations forward. Indeed, breakthroughs such as direct cross-strait travel can be traced directly to the understanding.

In sum, London and Beijing foisted the “one country, two systems” reunification formula on Hong Kong’s people without their input, consent or approval. This was because Hong Kong was a colony—an anachronism left over from the nineteenth century. This will never be allowed to happen in Taiwan—a thriving democratic state. So, comparing the Hong Kong case to Taiwan’s situation is a bit of a stretch—some might even call it nonsense.