Hong Kong's Umbrella Uprising Could Be Costly for Taiwan 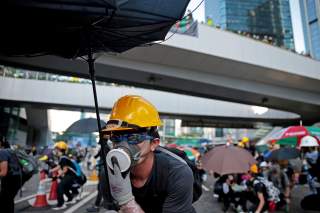 The Hong Kong unrest continues past nine weeks and shows no sign of abating. “Unrest” is an inadequate description. The reaction of the protestors is beyond anger; it is beyond frustration. Even government civil servants have taken to the streets. Participants urge one another to act like water, flowing through the city around obstacles and continuously gaining force. Faces are masked to protect identities, and care is taken to avoid meaningless cruelty and danger.

China’s political and information warfare machines are operating at full power. Blame is assigned to many parties, including the United States. Videos and pictures are circulating of PLA forces in uniform in preparation for action. The signal is clear.

It is unlikely that this will end well. Previous uprisings that have gone wrong come to mind such as the Hungarian Revolution of 1956 and the Prague Spring of 1968. The uprising in Saigon in 1975 might be another.

Once upon a time, we understood that helping democracies, even imperfect ones as long as they took care of their people, meant success for America. We were good, in those days, at extolling our principles that were so much admired by captive peoples. Now, short-range ballistic missiles from North Korea don’t bother us; they can’t reach us. We have yet to even offer encouraging rhetoric on Hong Kong. Instead, we say:

“Well, something is probably happening with Hong Kong because when you look at, you know, what’s going on, they’ve had riots for a long period of time. And I don’t know what China’s attitude is. Somebody said that at some point they’re going to want to stop that. But that’s between Hong Kong and that’s between China, because Hong Kong is a part of China. They’ll have to deal with that themselves. They don’t need advice.”

Intentionally or not, “they don’t need advice” telegraphs that we’re willing to give Beijing a pass on Hong Kong. The coincidental on-off trade negotiations are a bad context. Taiwan has to be very worried about Hong Kong as a precedent.

And speaking of trade, we do have at least one option available to compete in support of democracy and freedom. We should fast-track a free trade deal with Taiwan. We can show support for Hong Kong without directly intervening while dispelling any perception by Taiwan that it may be collateral damage in our trade war. In the words of William Stanton in the Taiwan News:

“The United States needs to reach a bilateral trade agreement with Taiwan not just because it would be good for Taiwan, but even more so because it is in the best strategic interests of the U.S. in the Asia-Pacific region. And now is the time to do so because, since the signing of the Shanghai Communique in 1972, relations between the United States and Taiwan have never been better, U.S. relations with the PRC have never been worse, and the PRC continues to increase its aggressive efforts to force unification on the Taiwanese people. Now, more than ever, the U.S. should adopt concrete measures to support and strengthen democratic Taiwan.”

Like it or not, Hong Kong is a test for the United States. The region is watching.