Honorable Intentions: The Anniversary of My Lai Reminds Us of the Military's Complex War History 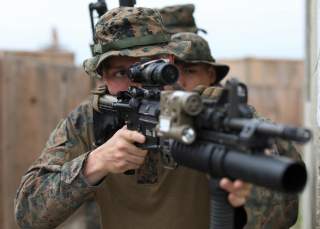 March sixteenth marks the fifty-second anniversary of the My Lai Massacre in South Vietnam where Army Lt. William Calley and his unit intentionally violated the warfighting principle of humanity. Calley and his men disregarded the civilian immunity of the villagers of My Lai by murdering some 500 Vietnamese civilians, including more than 350 women, children and babies. They perpetrated these acts despite facing no resistance and finding only a few weapons in the town. Calley was the only person convicted of war crimes in connection with My Lai and sentenced to life in prison. However, shortly after Calley was sentenced, President Richard Nixon, with strong support from the American people, intervened in the judicial process to remove him from prison. Nixon placed him under house arrest until he was paroled in 1974.

Since the end of the Vietnam War, the Department of Defense has taken significant steps to develop and institutionalize a law of war program that permeates all aspects of military training and overseas operations, instilling the fundamental principles of military necessity, proportionality, civilian distinction, and humanity. However, many of the same moral questions America faced during the Calley trial have resurfaced this past year after President Donald Trump pardoned Army Lt. Michael Behenna, who served five years in prison for the murder of an Iraqi prisoner in 2008; Army Maj. Mathew Golsteyn, who was accused of killing an unarmed Afghan man who had been linked to the Taliban in 2010; and Army Lt. Clint Lorance who served six years of a nineteen-year sentence on two charges of second-degree murder and obstruction of justice after ordering his soldiers to open fire on three unarmed men in Afghanistan, killing two of them.

The president also considered pardoning Former Special Operator Chief Edward Gallagher, a Navy SEAL accused of shooting unarmed civilians and stabbing an enemy prisoner to death. Gallagher had been acquitted of murder and other serious charges in July 2019 but convicted of the lesser offense of posing with a corpse of an ISIS fighter in Iraq. Gallagher completed his four-month sentence behind bars and through a controversial presidential clemency, he was able to retire with his highest rank, full honors and benefits.

In response to the president’s actions, many prominent voices have shared their concerns over the practice of pardoning convicted war criminals who have committed “Grave Breaches” of the Geneva Conventions.

One such response was from a former chairman of the Joint Chiefs of Staff, retired Gen. Martin Dempsey. Dempsey tweeted: “Absent evidence of innocence or injustice, the wholesale pardon of U.S. service members accused of war crimes signals to our troops and allies that we don’t take the Law of Armed Conflict seriously. Bad message. Bad precedent. Abdication of moral responsibility.”

The former Marine Commandant, retired Gen. Charles Krulak said about the pardons: “This is a moral debate. It is about who we are.”

However, Generals Dempsey and Krulak failed to observe that this “abdication of moral responsibility” is actually a reflection of many Americans’ long-standing ambivalence toward the laws of armed conflict and a fair representation of “who we are.” In fact, most Americans’ views on adhering to and upholding these jus in bello principles have not been aligned with the foreign policy establishment, both during the Vietnam War and present. Americans have consistently held that these warfighting rules are pliable and even omissible against shadowy and barbarous enemies like the Vietcong, Al Qaeda, and ISIS.

In April 1971, after a jury of six military officers found Lt. William Calley guilty of the premeditated murder of at least twenty-two civilians, 79 percent of Americans disagreed with the jury verdict and open letters to the White House were one hundred to one in favor of the perpetrators. Calley was even lionized in a jingoistic pop song called, “The Battle Hymn of Lt. Calley,” which included the line, “There’s no other way to wage a war.” The song was widely received, sold more than a million copies and notched #37 on the Billboard charts.

At the time, supporters of Calley didn’t refute the evidence or facts of the case, but justified his actions by saying: “Even if Calley had committed the acts for which he had been accused, they took place in the fog of war, and he’d spent months watching his friends be maimed or killed.” With 75 percent of the country supporting him, President Nixon made the populist decision to remove Calley from prison. Nixon even told Henry Kissinger that “most of the people don’t give a shit” whether Calley killed these civilians or not. In this instance, the president’s actions clearly reflected the will and morality of the American people.

In response to Nixon’s actions, the young Army JAG prosecuting the Calley case, Captain Aubrey Daniels, wrote an uncomfortable letter to the president on the dubious moral standing of the nation. Daniels lamented: “How shocking it is if so many people across the nation have failed to see the moral issue which was involved in the trial of Lieutenant Calley—that it is unlawful for an American soldier to summarily execute unarmed and unresisting men, women, children, and babies.”

Over five decades have passed since My Lai. So how do Americans view the manner in which U.S. troops fight in current wars? The answer is surprisingly consistent. In 2016, the Red Cross reported that Americans “are substantially more comfortable with war crimes than are populations of other Western countries like the United Kingdom, France, Switzerland, and even Russia.” And according to a Reuters/Ipsos poll conducted the same year, nearly two-thirds of Americans believe torture can be justified to extract information from suspected terrorists, a level of popular support commensurate to Nigeria, which has been battling a decade-long insurgency that has displaced two million people and killed thousands.

In fact, on par with American sentiment during the Calley trial, currently, over three-quarters of Americans believe that U.S. service members shouldn’t be prosecuted for overseas war crimes simply because “war is a stressful situation and allowances should be made.” And according to a recent Carnegie Council study, more than a third of Americans believe that soldiers who executed unarmed women and children “acted ethically” if the overall reason for waging the war is just. But most revealing is the large proportion of all veterans, roughly 40 percent, who also support the pardons of service members who have already been convicted or are guilty of war crimes.

And the Fox & Friends morning show took active measures in the war crimes lobby to connect with this base of Americas. Co-host Pete Hegseth said in reference to the pardons: “To the people in middle America . . . they’re going to love this. These are the good guys.”

America’s elected officials have continued to resound these views as former congressman and Marine officer Duncan Hunter Jr. did on the Edward Gallagher case. Hunter said while holding office: “I frankly don’t care if [the captive] was killed. I just don’t care. Even if everything that the prosecutors say is true in this case, then, you know, Gallagher should still be given a break, I think.”

Louis Gohmert, another military veteran serving in Congress, said in a lobbying effort for a White House grant of clemency for a convicted war criminal from his district: “quit listening to deep-staters at the Defense Department and listen to the American people who have a sense of what’s right and it’s not right what happened to First Sergeant Hatley.” In 2009, Hatley was convicted by a military jury of the premeditated murder of four Iraqi prisoners.

We should also dismiss the theory that Americans’ lack of awareness and understanding of the prohibitions in warfare is the reason for their support for these pardons and tolerance of war crimes. In fact, according to one MIT study, eight out of ten Americans are aware of America’s obligations to abide by the Geneva Conventions, including the provision that makes intentionally targeting civilians a war crime and Grave Breach under international law; however, almost half this group would support intentionally bombing and killing up to one hundred thousand civilians in a foreign city, if the utilitarian trade-off meant saving the lives of U.S. troops in a costly ground war. During World War II, we witnessed the horrific violence inflicted upon opposing cities by both Allied and Axis powers through this type of unrestricted warfare.

And just to be clear, the laws of war do not afford for such a cost-benefit option that permits the intentional targeting of civilians or killing prisoners that are hors de combat. They also don't permit the targeting of civilian cultural sites as was briefly being considered by the White House during the Iranian military stand-off in January.

Dempsey was right when he said we are “abdicating our moral responsibility” through these pardons; however, most of the American people, including many veterans, have had their minds made up, for some time now, on the selective application of the laws of war. And the politicians representing these views aren’t the outlier as many in the foreign policy establishment would like to believe, rather they reflect a long-standing societal norm.