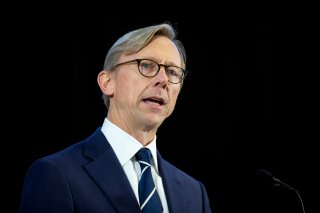 Yesterday Brian Hook, the U.S. Special Representative for Iran, appeared in front of the House Foreign Affairs Subcommittee on Middle East, North Africa, and International Terrorism. Hook previously served as the director of policy planning in the State Department and is also the cofounder of the John Hay Initiative, whose purpose is to advise political candidates about the dangers of “neo-isolationism.” John Hay Initiative experts advised every Republican presidential campaign in 2016 except those of Rand Paul and Donald Trump. Hook is now one of the key overseers of the Trump administration’s policy towards Iran.

Subcommittee Chair Ted Deutch (D-FL), after the requisite condemnation of Iranian behavior, criticized the administration’s alienating behavior. According to Deutch, under Donald Trump the United States has become estranged from its traditional allies, making it difficult for them to stand with the U.S. government in an international coalition against Iran. And it’s not only allies who have lost trust in the U.S. government’s word. “It is highly likely that Iran twice attacked civilian ships in the gulf over the last month. But Congress would like to see that evidence before stating it as a fact,” Deutch said. The allegations that Iran damaged multiple oil tankers in two separate incidents were propounded definitively by Secretary of State Mike Pompeo but have met skepticism in some quarters.

Deutch is worried that if the Trump administration finds a way to let pressure off the increasing tensions, or find some sort of third-way solution, then it would end in a war with Iran. “[I]t appears there is no process in place to reassess the assumptions underlying the administration’s policy, consider alternatives, and change course. If the current trend continues, the Trump administration is likely to find a binary choice: back down in the face of Iran’s aggressive behavior or engage in military action. And rather than force Iran back to the negotiating table, the administration’s policy is increasing the chances of miscalculation, which then would bring the United States and Iran closer to a military conflict,” the congressman warned.

During his opening statement, Brian Hook said that the administration’s “maximum pressure campaign” had two primary objectives. “First, to deprive the Iranian regime of the money it needs to support its destabilizing activities. Second, to bring Iran back to the negotiating table to conclude a comprehensive and enduring deal as outlined by Secretary Pompeo in May 2018 shortly after the president left the Iran deal.” The twin criticisms leveled at the Obama-negotiated Iran deal were that it was too narrow (only touching on Iran’s nuclear program) and that it was temporary (with provisions set to expire after a set term). The original logic of the deal was that Iran’s nuclear program was an outstanding issue that had to be settled before all others, and that restrictions could be extended into the future after initial trust had been built.

The grand deal described by Hook would address four areas: Iran’s nuclear program, their ballistic missiles, their “lethal support and financial support to terrorist groups and proxies,” and their “arbitrary detention” of American citizens. It’s assumed such an agreement would be a one-and-done stop for all disagreements, and last in perpetuity. “I would say that our policy at its core is an economic and diplomatic one. But Iran has not responded to this in a diplomatic fashion. It has responded to it with violence. And we very much believe that Iran should meet diplomacy with diplomacy, not with terror, bloodshed, and extortion,” said Hook in closing.

While Deutch appreciated Hook’s testimony, he was distrustful of the assurances given by members of the president’s administration. “As Undersecretary of State for Arms Control, [National Security Advisor John] Bolton made misleading or false statements about biological weapons in Cuba, weapons in Syria, and of course, about Iraq’s development and stockpile of WMDs. Before entering the White House, he advocated for preemptive strikes against North Korea and Iran,” Deutch reminded everyone. In addition, John Bolton has said that “If I had to say something I knew was false to protect American national security, I would do it.”

Rep. Adam Kinzinger (R-IL) was incredulous of the criticisms coming from “the ‘Blame America First’ crowd that use Cuba, for instance, and Venezuela as a great example of how to do governance. First off, 9/11 was not an inside job. The Bermuda Triangle is not aliens. We landed on the moon. Vaccines save lives. And Iran did the attack in the gulf. And that’s I think the biggest thing to understand. You continue to see the conspiracy theorists that pop up, that can take any amount of evidence and try to cast blame and say it’s a false flag. And usually, we relegate those to the very extremes of political discussion, but I think sometimes we’re seeing that enter the more mainstream now because frankly some people have let politics get in the way of good foreign policy.”

Whoever was responsible for the attacks, policymakers may be missing the forest for the trees. “Iran may well have been responsible for the attacks on shipping in the Gulf of Oman. But these actions, however reprehensible, are the direct and predictable result of the unilateral U.S. withdrawal from the JCPOA and imposition of an embargo on Iranian oil exports,” explained Barbara Slavin, director of the Atlantic Council’s Future of Iran Initiative. “The United States took these steps out of supposed concern about Iran’s regional profile, but the result has been more aggressive actions as well as threats to resume amassing quantities of low-enriched uranium.”

“U.S. policy has failed and will continue to fail until the Trump administration agrees to new negotiations on a realistic basis, ends threats to destabilize Iran and overthrow its government and offers incentives for a change in Iranian policies. A first step would be to contact the new Iranian ambassador to the United Nations, a former nuclear negotiator, or set up another back channel for direct talks,” continued Slavin.

Despite the protestations from Brian Hook and members of Congress that the “maximum pressure” campaign is meant to benefit the Iranian people and their desire for a freer government, Professor Muhammad Sahimi believes it has done the exact opposite. “Unlike the Arab countries in which the population is generally anti-U.S., but their regimes are pro-U.S., in Iran it has always been the case that the people like the United States, even though they are opposed to its intervention in Iran’s political development,” said Sahimi, who holds the NIOC Chair in petroleum engineering at USC. “But, now, they blame the U.S. for leaving the JCPOA, imposing harsh and inhumane economic sanctions on Iran that have hurt their daily lives very badly, and believe now that the U.S. cannot be trusted.”

“This will have long-term strategic consequences for U.S.-Iran relations and the Middle East. In addition, ‘getting around the sanctions’ is an excuse for the hardliners-linked entities in Iran to control the black market, make fabulous riches, and add to the ordinary people's misery,” Sahimi added. “Finally, shortage of vital medicine and medical equipment in Iran have begun taking their toll. These are all blamed on the United States.”

Derek Chollet, executive vice president of the German Marshall Fund, believes that the administration’s lack of coherence has allowed it to be painted into a corner. “This is the inevitable reckoning of a policy long on swagger and short on strategy. Up to now the administration has been able to stumble along by having it both ways—pulling out of the Nuclear deal while Iran remains compliant and ratcheting up the economic pressure significantly with little Iranian response,” Chollet told the National Interest. “Iran’s actions in the Gulf, while outrageous and unacceptable, show that it has cards to play too, and force the administration to confront the trade-offs and contradictions it has been able to avoid. So, I think it is an exaggeration to argue that we provoked this, but there’s no question we are in a weaker position—less trusted, more isolated and internally divided—to deal with Iran’s nefarious actions than we were a few years ago.”

Denying the effectiveness of the “maximum pressure” campaign, Lt. Col. Daniel Davis told the National Interest that “strangling Iran’s economy will lead to more undesirable behavior from the regime, not less.” Instead, Davis, currently a senior fellow at Defense Priorities, suggested a solution to avoid the binary choice described by Deutch. “The best policy to reduce undesirable behavior from Tehran is to provide a diplomatic ‘off ramp’ to address disputes. The U.S. should also not pick sides in the ongoing Sunni-Shiite or Iran-Saudi disputes. Issuing a laundry list of one-sided demands is a counterproductive dead end.”

Davis believes Trump should lean more on his own professed desire to avoid war with Iran, and less on people like Hook and Bolton whose previous statements contradict this. “The U.S. should be doing less in the Middle East, not more. President Trump was right to order the withdrawal of U.S. forces from Syria—his advisors should implement his policies, rather than thwart them. Any military option, including so-called ‘limited strikes,’ would grow into a major mistake, even worse than Iraq. That would be bad for the United States and for our friends in the region,” he concluded.