Hope for the Western Sahara 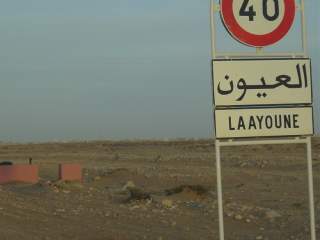 The legendary Sahara covers a vast stretch of northern Africa, and includes a 100,000-mile expanse that is the southern half of my homeland, the Kingdom of Morocco. Regrettably, this stretch of land is also home to one of the longest enduring, and perhaps the most uselessly destructive, conflicts on the continent. Forty years ago this week, 330,000 of my fellow citizens reclaimed the Moroccan Sahara from its Spanish occupiers, firmly but peacefully, in what has become known as the “Green March”: the only movement of national resistance against European imperialism to be waged successfully without a drop of blood. Alas, fascist Spain had already managed to sow the seeds of violence in the territory before its withdrawal.

In the latter years of its imperialist adventure, the Spanish government created a separatist movement of indigenous collaborators, the “Polisario,” to lay claim to every inch of the Moroccan Sahara. In 1975, the group initially eschewed any attempt to counter the “Green March.” But the military government in Algiers subsequently began to fund, train and arm a generation of Polisario fighters—aligned at the time with the Soviet Union and seeking to bleed pro-American Morocco, it found in the group a willing proxy. Polisario guerrillas fought a devastating 15-year war with Morocco, enabling oil- and gas-rich Algeria to weaken the oil-poor kingdom at little cost to itself.

Tensions endure through a low-intensity conflict, that continues today. More than a generation since the demise of Algeria’s Soviet patron, the Polisario still serves the junta as a convenient foil: the regime adopts the familiar technique of deflecting domestic corruption and human rights abuse on a foreign bogeyman by spreading conspiracy theories about Morocco. For example, in much of Algeria’s state-dominated media, Moroccan intelligence agents are alleged to be supplying Algerian youth with drugs and fomenting civil strife inside the country. Morocco’s progress in democratic development and civil society, meanwhile, are obscured or dismissed.

Meanwhile, inside the strip of Saharan territory which the Polisario controls, two generations of young people have been brainwashed to regard Morocco as an enemy—while international aid to the territory is largely siphoned away by their corrupt political leadership. Civilians under Polisario rule remain hungry and destitute, with limited horizons. They are tempted by the overtures of jihadist groups in the neighboring Sahel, and, as the State Department’s reporting on global terrorism shows, numerous Saharans have joined their ranks.

In response, King Mohammed VI has made a practice of “turning the other cheek,” avoiding conflict and pushing for peace and security. Since assuming the throne in 1999, he has poured billions into the economic development of the Sahara. In response to separatist sentiments among a subset of the ethnic Saharan population, he has extended an autonomy plan for the province, judged by the United Nations and the United States to be a credible resolution to the conflict with the Polisario. Over the next two weeks, the king is visiting the territory and kickstarting a new $14 billion plan to further develop its economic infrastructure and human services. But at every turn, Algiers continues to block efforts to settle the conflict. Thus the future of peace in the Sahara remains a function of Algerian policies—or, to borrow language from more familiar conflicts in the Arab region: “The road to the Sahara runs through Algiers.”

But a new trend in Algerian discourse, effectively calling for peace in the Sahara, gives Moroccans cause for hope. It is a quiet trend, manifesting for example in passing comments by opposition party heads, who ran protest campaigns against the country’s aging president in last year’s presidential elections. To be sure, one barely heard their voices on the country’s domestic media, which granted rivals of the incumbent little airtime. But according to audience surveys, the Algerian population, distrustful of its own media, tuned in en masse to the Tunisian Nessma TV network, which granted equal time to all candidates. And there they were: Abdelaziz Belaid, chairman of the Front for the Future, and Ali Fawzi Rebaine, the leader of Ahd 54. Calling for a transition to civilian government, they denounced corruption and oligarchy. They called for an end to “the politics of deflection.” Relatedly, they gave voice to the widespread concern among Algeria’s political class that the longstanding policy of distrust toward the United States and its Moroccan ally was harmful to Algerian security.

Other, less prominent voices have taken the discussion a step further. Witness Djil Djadid (“New Generation”), a party rooted in Algerian diaspora politics. Though based in Paris, it has negotiated free passage to Algiers, enabling its leadership to build a support base inside the country. For its cofounder and spokesman, Zoheir Rouis, Morocco is not only a desirable security partner in the two countries’ shared interest in fighting terrorism; it is also a political model worth studying, since the new Moroccan constitution has granted considerable authority to an elected head of government. Morocco’s longstanding policies of integrating disparate ethnic groups into the political mainstream—notably the Berbers—provide a model for Algeria in its own struggle to mitigate tension between Berber and Arab. And while Morocco’s autonomy plan for the Sahara is radical by Algerian standards, it is nonetheless relevant to the latter’s challenges in meeting the demands of its Touareg population and other disaffected groups within the fringes of the country.

Washington has struggled to help resolve the Saharan conflict, so far unsuccessfully. It has also struggled to more effectively engage the Algerian political leadership in discussions of a security partnership. Last year, for example, U.S. Secretary of State John Kerry was rebuffed by President Bouteflika when he proposed to station surveillance drones in the country’s south to observe the activity of jihadists in the Sahel and share the intelligence with Algiers.

On this fortieth anniversary of the “Green March,” a celebrated moment in the annals of peaceful political transition, it behooves the United States to recognize that all these challenges are linked: by doing more to support political reform and diversity in Algeria, it can help foster the circumstances that would allow for a strong relationship between Washington, Algiers and Rabat. And it will find in Morocco a willing partner.