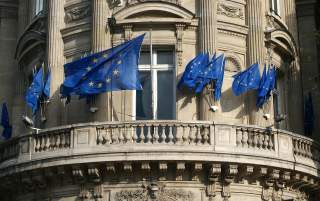 The European Union is now sixty years old. Instead of being in a celebratory mood, the EU’s leadership is fighting to hold the twenty-eight, soon to be twenty-seven, nation bloc together. Indeed, the set of elections in 2017, with the French presidential election as the epicenter, is a battle between populist-nationalist and “establishment” forces, which is an eerie echo of the 1930s.

What makes the French contest so important is that one of the leading candidates, National Front leader Marine Le Pen, wants to pull France out of the euro and put the question of EU membership to a referendum. Coming on the heels of an unusually rough-and-tumble parliamentary election in the Netherlands, the questions over Europe’s political future loom large, especially with Germany going to the polls in September and Italy in early 2018. Most recent polls in Italy put the populist Five Star Movement in the lead in opinion polls.

Why has populism risen as a major political force in Europe? The simplified answer is that populist forces have tapped into public discontent in many countries due to the lack of a perceived democratic element to the grand European experiment with integration (the view being that the bureaucracy in Brussels is setting the agenda); immigration, which many perceive as a threat to their way of life (a situation aggravated by ongoing terrorist attacks that have eroded personal security); and difficult economic conditions (especially in countries with high unemployment like France, Spain, Greece and Italy).

The last pertains to the tough economic times that have gripped most of Europe since the Great Recession and show little sign of improving for many Europeans. In many EU countries budgets remain tight, debt levels remain onerous and austerity fatigue has sunk in. The average unemployment rate for the Eurozone has only recently dipped just below 10 percent. Populist parties have astutely latched on to many of these issues, helping move them from the political fringe to center stage in a number of countries.

The European condition has left pro-EU forces, usually more center right and center left parties, grappling with how to respond. Many of these parties, especially those on the left, have not formulated a response to the legitimate grievances felt by their voters and articulated by the populists. Indeed, the large number of immigrants already in Europe, and the challenges in absorbing, assimilating and finding them employment, will keep issues of national identity and economic competition on the cutting edge of European politics and economics through the medium term.

The March 15 Dutch elections were hard-fought, with three issues dominating—the economy, immigration and EU membership. The outgoing liberal Labor Party coalition under Prime Minister Mark Rutte, in office since 2010, had presided over a difficult economic period, during which hard decisions were made to reduce government spending, provide better benefits for the poorest parts of Dutch society and set the stage for stronger, more sustainable economic expansion.

To the Rutte government’s credit, the Dutch economy improved. Real GDP growth accelerated, unemployment fell, public-sector debt declined (a remarkable achievement compared to France, Italy or the United States) and the fiscal deficit is expected to be in balance this year. However, many Dutch voters, especially those in the middle class, have seen their wages stagnate. At the same time, it has been easy to stir up discontent against immigrants, many of whom benefit from the welfare system. Add to this the rise of radical Islamic terrorism in Europe, with attacks in the Netherlands as well as in neighboring countries and Geert Wilders and the PVV rode a wave of popularity in the polls through much of the campaign, hinting that they could finish in first place.

The 2017 campaign eventually became a contest between Rutte, who represented moderate and pragmatic conservatism, which is pro-EU, versus Wilders, who wanted to upend the established order by enacting his “The Netherlands Ours Again” program. The program calls for an exit from the EU (“Nexit”), reestablishing a Dutch currency and ending Muslim immigration to the Netherlands. According to the populists, the EU has been a major force in pushing open borders and more immigrants.

Rutte was also helped by Turkey, which is in the midst of a referendum to change its constitution to give its president greater powers. The Dutch government would not allow Turkish officials to hold rallies on their soil in the Netherlands Turkish community, considering the tense nature of Dutch elections around the subject of Islamic immigration. Turkish president Recip Tayyip Erdogan responded to that decision by likening the Dutch to the Nazis, an insult that did not go down well in the Netherlands and Europe. Rutte stuck to his position, which allowed him to demonstrate his leadership in a tense situation.

Although Rutte’s liberals lost some seats, his party maintained its lead position with the largest number of seats. The Labor Party was punished by its former followers, suffering one of the worst electoral defeats in modern Dutch democracy—ever. This leaves Rutte likely to seek a new coalition with a new set of parties.

Geert Wilders’s Party for Freedom gained five seats, is likely to be the voice of the official opposition, and the government he faces could be a weak, multiparty coalition that finds passing legislation difficult. The new government needs to prioritize its objectives and work hard to provide coherent and effective policies. Failure to make headway on Dutch problems could reopen the door to new elections in which an unrepentant Wilders is able to tap a larger group of frustrated Dutch voters as he says, “I told you so,” offering an alternative populist option.

While the Dutch elections were closely watched with trepidation, the French election has gained even more attention as Le Pen has maintained strong showings in opinion polls, which indicate that she could win the first round of the vote on April 23 and be one of two political contenders in the second round on May 7. Although she is widely considered unable to win in the second round, Le Pen is being taken very seriously, with a steady stream of corporate- and foreign-bank visitors to her party’s offices. Meanwhile, French bonds have cheapened compared to German bonds.

Like the Dutch elections there are three main issues, the economy, immigration and EU—and Le Pen overshadows all of these. Although the French economy is beginning to gain a little traction, it has underperformed for years, wages have stagnated for many and employment gains are increasingly in temporary work. Unemployment only recently slipped under 10 percent. At the same time, much of the public is tired of the cynicism and corruption of its political class.

The Le Pen candidacy has been helped by the stumbles of the establishment parties, the socialists, represented by Benoît Hamon (pro-EU, pro-immigration and pro-more worker rights), and the conservative Republicans, represented by François Fillon. Hamon suffers from the Hollande administration’s failure on the economy and a divided left-wing vote due to the candidacy of Jean-Luc Melenchon. Fillon (supposed to be the “clean” candidate) stumbled badly with a scandal involving allegedly unjustified salaries for his wife and two of his children.

The other major candidate and frontrunner in some polls is thirty-seven-year-old Emmanuel Macron, a former Rothschild banker and economics minister in the Hollande government, standing on a centrist platform. Although he favors maintaining the thirty-five-hour work week, he leans toward a more market-driven approach to the economy and reducing the fiscal deficit. He also favors remaining in the EU. As Fillon’s campaign imploded and people have begun searching for an alternative to Le Pen, Macron has gained support. He is now a strong candidate with the potential to make it to the second round where he will most likely defeat Le Pen to become France’s next president.

It is in this tumultuous political campaign that Le Pen has gained traction. Her campaign is running on a “France First” stance that is tough on immigration (especially from predominately Muslim countries), calls for tougher law-and-order policies (especially in regard to terrorism) and  desires a strong role for the state in the economy, particularly in terms of trade policy (i.e. protectionism). And France’s National Front is anti-EU and pro-Russian.

Le Pen would represent a radical—and probably highly disruptive—change of direction. Under the National Front plan the euro would be discarded and a new currency would be created, while French public sector debt would be converted into the new unit. France’s general government gross debt is estimated to be around €2.3 trillion (equal to around 122.7 percent of GDP, according to the Organisation for Economic Co-operation and Development). A conversion of all or most of this would certainly be disruptive of markets.

A move by France to leave the Eurozone and/or the EU would reverberate throughout the region and be even more disruptive of markets, especially if it gave a boost to similar forces in Italy, which have an even larger mountain of debt to refinance and challenge banks. While Germany’s election is not likely to see any breakthrough by populist parties, Italy’s could, especially following the breakup of the ruling center-left Democratic Party. If opinion polls are wrong, as they were with Brexit and Donald Trump’s victory, a Le Pen victory would certainly give impetus to the Five Star Movement in Italy, which could see two EU states headed by anti-EU leaders. This is indeed Europe’s crazy electoral season.