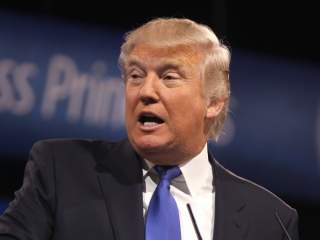 Donald J. Trump has entered presidential politics like a force of nature, thrilling some, horrifying others, and contributing to a nominating contest that has been among the most polarizing in recent memory. Thus it is not surprising that some should find controversy in the decision by The National Interest, and its parent organization the Center for the National Interest, to host Mr. Trump’s foreign policy speech in Washington last week. Yet our center does not shy away from controversy in serving the public interest. After all, former President Richard Nixon decided to establish the Center in 1994 precisely to create an institution that could challenge conventional wisdom and political correctness in foreign policy. Why otherwise create yet another policy institute in a city with no shortage of such centers, even two decades ago? His statement “I’m not a big fan of think tanks, but this is a different one” is still on the Center’s web site.

Our first experience with controversy came in 1996, when we honored Singapore’s Senior Minister Lee Kwan Yew at a gala dinner at the Four Seasons Hotel in Washington. Nixon had long admired Lee Kwan Yew and considered him a real friend; he praised him at some length in his book Leaders for his transformation of Singapore into a stable and prosperous country free from the pervasive corruption that undermined so many postcolonial societies. Nevertheless, Lee was unabashedly a semi-authoritarian leader who believed that he knew best how to forge his multiethnic city-state into a unified regional economic powerhouse that would provide unprecedented wealth to its citizens. Neoconservative New York Times columnist and former Nixon speechwriter William Safire did not agree, however, and against the backdrop of his own long-standing feud with Lee, went so far as to write a column calling on “all good Nixonites” to boycott our event.

We did not blink. And we had a very successful event both financially and substantively by assembling a prominent and diverse group for remarks by Lee. In retrospect, this drama was mild by comparison with the excitement following our invitation to Mr. Trump to deliver his first prepared foreign-policy speech in Washington on April 27. Taking into account that no small part of the inside-the-beltway Republican establishment has announced its intent to stop Mr. Trump from receiving the party’s nomination at almost any cost, we expected a degree of hostility. Even in the best of circumstances, presidential politics engages strong emotions and inspires a take-no-prisoners approach. Of course, this year’s Republican nominating process has been more divisive than most.

For us, this environment was not a deterrent but an additional rationale to invite Mr. Trump. As a tax-exempt nonprofit organization, we cannot and do not endorse political candidates. Nor does our invitation represent an endorsement. On the contrary, it represents a statement that it is important for both Washington’s foreign-policy elites and the American people to hear the Republican front-runner’s foreign-policy vision and to understand how Mr. Trump would handle both specific challenges as well as broader questions like America’s role in the world.

This is why we immediately expressed our interest in hosting the speech upon learning that Mr. Trump was considering delivering a substantive foreign-policy address. After his victories in New York and elsewhere, some other prestigious organizations approached the campaign as well; by then, however, we were already working with the campaign to plan the event.

For the record, the Center for the National Interest’s board of directors includes individuals supporting both political parties and with differing perspectives toward Mr. Trump’s candidacy and toward U.S. foreign policy. In fact, some Center board members have publicly opposed Mr. Trump and have contributed financially to other candidates. Despite this, they shared the belief that our organization had both an interest in and indeed a responsibility to provide a platform for Mr. Trump present his views on U.S. foreign policy. We decided that our magazine The National Interest should formally host the speech in view of its ongoing coverage of foreign policy in the presidential campaign and its many lower-profile events focused on these issues.

We organized the event in generally the same way that we arrange other Center and magazine programs: as an invitation-only event with participants drawn from both parties, with varied perspectives and impressive credentials. We developed the invitation list independently from the Trump campaign, which provided a short list of Mr. Trump’s advisors—whom we thought other participants would like to meet—but did not attempt to interfere in any way. We invited members of Congress, foreign ambassadors, top experts, leading journalists and others. The audience eventually included four ambassadors (from Italy, the Philippines, Russia and Singapore), senior officials from previous Republican and Democratic administrations, supporters of Mr. Trump, former Secretary of State Hillary Clinton, and other candidates, and journalists, including some known for highly critical prior coverage of Mr. Trump. Separately, we provided facilities for a large number of working journalists from national media organizations covering the presidential campaign.

As the hosts, we are ill suited to evaluate Mr. Trump’s speech; some may find criticism ungracious or, conversely, see praise as unpersuasive. That said, we heard enough from Mr. Trump to feel that while his approach to foreign and security policy is not yet fully developed and remains a work in progress, it is quite different from the existing semi-consensus among America’s foreign-policy elites. His remarks outlined a fundamental break with post-Cold War U.S. foreign policy and offered an alternative vision with considerable appeal to a frustrated public, if less to the elites who have defined, articulated and implemented policy through three administrations run by both major political parties.

Some have described Mr. Trump’s “America first” foreign policy as a form of Jacksonian populist nationalism. In some respects, it also draws upon George Washington’s admonition to “steer clear of permanent alliances” without “infidelity to existing engagements” and to John Quincy Adams’ praise of an American commitment to freedom that “goes not abroad in search of monsters to destroy.” Like Adams, Mr. Trump gives priority to liberty and democracy for Americans above that of citizens in other countries. Unlike the President Obama’s calls for “nation-building at home,” however, Mr. Trump’s vision of interest-driven restraint explicitly celebrates American military power and defines strength as an essential precondition for effective diplomacy.

For much of the post–Cold War era, experts both inside and outside the government have faced informal but powerful pressure to share in existing interventionist orthodoxies if they seek top positions requiring Senate confirmation or even regular appearances in mainstream media. From this perspective, it is predictable that an avowedly antiestablishment candidate should provoke ferocious rhetoric from not only the political establishment, but also the foreign-policy establishment (perhaps even more bitterly).

Pledging that he would not surround himself “with those who have perfect resumes but very little to brag about except responsibility for a long history of failed policies and continued losses at war” has surely fueled establishment fear of Mr. Trump. This statement—the functional equivalent of his signature line “you’re fired” directed at a number of former senior and mid-level officials—ensured that not only many Democrats, but also a number of Republicans in Washington’s foreign-policy community would race to the barricades. Some self-serving Trump-haters may well see this as the greatest danger he poses; ending the dominance of today’s foreign policy nomenklatura could directly threaten their careers. He provokes similar reactions among the transnational Davos elites by insisting “the nation-state remains the true foundation for happiness and harmony.”

In America, this Soviet-style foreign-policy nomenklatura system has helped the post–Cold War foreign-policy elites in the Republican and Democratic parties to develop a sense of entitlement wholly disproportionate to their accomplishments. How difficult was it to run America’s foreign policy during an era of virtually unquestioned dominance? Why—with so many advantages—have our elites produced so many failed policies? And why do they feel no shame? No matter how many individual positions he changes, Mr. Trump will never satisfy the architects of these massive mistakes or, for that matter, their ardent supporters on editorial boards and television screens. To be clear, it is entirely appropriate to criticize Mr. Trump’s views or, for that matter, his temper. Both have long been important components in our electoral politics. What is not appropriate is to attempt to shut down public discussion of critical national issues.

Yet this is exactly what some seek to do. Once the Center for the National Interest and The National Interest magazine agreed to host Mr. Trump, we became targets as well. That explains why former Bush administration State Department Counselor Eliot Cohen—who organized an open letter condemning Mr. Trump’s foreign-policy aims—has said that “to give him a platform, and hence legitimacy, is to be complicit in his rise.” This is a striking statement by an academic, who one might expect to support intellectual freedom, not to mention a leading neoconservative who enthusiastically seeks to promote freedom around the globe. More than that, it is offensive that he and others who express such strong sentiments about freedom should attempt to deny not only Mr. Trump but also his supporters the opportunity to speak and to be heard. The millions who have voted for Mr. Trump give him all the legitimacy he needs. In practice, of course, Mr. Cohen’s approach to promoting freedom internationally cannot but limit it domestically, which is why he and others aggressively seek to prevent others from expressing alternative views and even to stigmatize those with differing perspectives. As executives at an institution committed to serious foreign-policy debate, we welcome their condemnation as a badge of honor.