Rand Paul: How to Achieve Peace on the Korean Peninsula 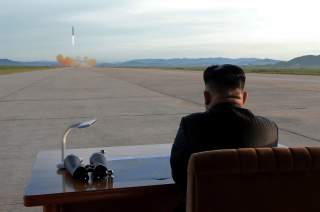 To every problem there exists a solution—even for a problem as vexing as the two Koreas. Recently, the rhetoric has ratcheted up, and I, for one, fervently hope that diplomacy and problem-solving can avoid war.

To solve a problem that seems to stump everyone, it is often necessary to consider what others refuse to consider. To solve the Korean problem, it may take considering options that both sides don’t like and think won’t work. If the problem had easy answers, then someone else would have fixed it by now.

So, notwithstanding that South Korea may not like this option, North Korea may not accept this deal, or that it might not work for a variety of reasons, I respond: “Tell me a better plan.”

For the Korean standoff and North Korean nuclear bellicosity, I offer this potential solution: invite China to be part of an international force to monitor the Demilitarized Zone in exchange for cessation and dismantling of North Korea’s nuclear program.

It is often written that what China fears most is that the collapse or defeat of North Korea would lead to U.S. troops on China’s Yalu River border. Take that fear out of the equation by inviting Chinese troops to participate in keeping the peace.

For that matter, if North Korea would dismantle its nuclear program, invite them to contribute monitors, as well as South Korea, to an international monitoring contingent.

Naysayers will say, “Never!” We should never invite in the Chinese, who slaughtered our soldiers in the Korean War. But never is a long time, and so far China is moving only very slowly, if at all, toward being of use in de-escalating tensions. Perhaps the offer of something so dramatic as inviting them to be part of the peacekeeping monitors would engage them to finally be part of the solution.

I would also include the Chinese in the international nuclear inspections that would need to confirm North Korea’s compliance.

Creating a more international demilitarized zone would also allow us to bring home more U.S. soldiers from Korea. The war has been over for nearly seventy years now. Perhaps it is time to include more regional countries in keeping the peace.

The big “if” with this plan is would North Korea see this good-faith effort as sufficient to give up its nuclear program? Given that the Libyan regime was still toppled after it gave up its nuclear weapons, it is understandable that North Korea is suspicious of promises from the West.

That is exactly why everyone seems to believe that China's involvement is necessary to unravel this standoff peacefully. So far, China has been slow to move. Sure, it is reportedly slowing trade with North Korea, but its actions have not been significant enough to change North Korea’s nuclear program.

As Graham Allison puts it, the “Chinese are strategically patient: as long as trends are moving in their favor, they are comfortable waiting out a problem.” While heated rhetoric gets China’s attention, acknowledgement of China as an equal by inviting them into Korea may do more to encourage Chinese engagement in the North Korea problem.

Allison goes on to argue that China sees problems on a different “time horizon” than we do. “Because of their expansive sense of time, Chinese are careful to distinguish the acute from the chronic, the urgent from the important.”

A tweet is not likely to significantly move a country that thinks in terms of millennia, not 140 characters. To really get China’s assistance, we will need more than their attention. It will require America’s acknowledgement of China’s rise and dominance in Asia.

Both North Korea and China need further assurance that the United States has no desire to topple the North Korean regime or to occupy one iota of North Korean land. The only assurance that might be sufficient to allay their concerns might be to invite China and the international community into Korea.

What are the odds of American politicians understanding China enough to engage it? Not good. The Washington consensus continues to believe that sanctions and bullying brings adversaries to heel.

Perhaps at times, when the world is united, sanctions can work, but I think quite the opposite is true for a world power like China. Sanctioning China will lead to more distrust, further distance from the United States, and a China that strategically watches as we flail about trying to constrain North Korea.

(This op-ed has been couriered to our State Department, the Chinese, Russian, South Korean and Japanese embassies and transmitted to intermediaries of the North Korean government.)