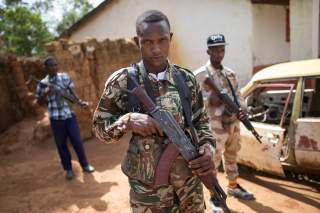 Today President Faustin-Archange Touadera of the Central African Republic (CAR) will ask the United Nations to help him put an end to the crisis in his country. On the surface, it’s a tough sell, given how many conflicts around the world demand international attention, and how few interests the United States has in the impoverished African nation. But ignoring CAR would be a grave mistake because a small engagement now could prevent regional destabilization, calm a growing humanitarian crisis, and perhaps even avert genocide.

Though it doesn’t make the front page of newspapers and magazines, violence has escalated terribly in CAR in 2017. A UN peacekeeping mission, known as MINUSCA, is already on the ground. The mission consists of more than ten thousand troops mandated to protect civilians and support the peace process, but it is stretched thin over a country the size of France. So far this year, more than half a million people have fled the country, and a further six hundred thousand are internally displaced. Last month, UN humanitarian chief Stephen O’Brien warned of early signs of genocide, and combatants continue to target civilians based on their religion and ethnicity. President Touadera’s democratic election in 2016 hope of peace and development after decades of unrest, but without additional international assistance, the rising violence in CAR could further increase, and spread across borders.

In the coming weeks, UN Secretary-General António Guterres is expected to call for the UN Security Council to strengthen MINUSCA by one thousand to two thousand troops, a move that could make a real difference in the mission’s ability to protect civilians around the country. France and the United States—who were behind the creation of the peacekeeping mission in CAR in 2014—should support this call, lest spiraling violence demand an even larger and more costly international intervention down the line. For the United States especially—which has called for UN peacekeeping budgets to be trimmed—the Central African Republic represents an opportunity to show that Ambassador Nikki Haley’s demands for cuts are about smart budgets, not wholesale slash-and-burn. But for additional peacekeepers to be effective, two conditions must be met.

First, UN peacekeepers must be committed to act robustly to protect civilians. CAR is a particularly dangerous environment, and MINUSCA has suffered more fatalities than any other UN mission this year. The UN should only accept troops from countries that understand the risks and are willing to shoulder them. Fewer, higher-quality troops can have a far greater impact than large numbers of poorly-trained or gun-shy forces. Portugal’s contingent of 150 special forces in MINUSCA shows that a small contingent can make a big difference saving lives on the ground, if the troops have the right skills and mindset. Similarly, when troops display a pattern of poor performance, the UN must send them home.

Second, the UN must be resolute in its efforts to end sexual abuse by peacekeepers. Despite the UN’s zero-tolerance policy on sexual abuse, allegations have persisted against a number of MINUSCA peacekeepers. Sexual abuse against vulnerable Central Africans by the very people sent to protect them is unacceptable. Secretary-General Guterres will hold a high-level meeting this week on the margins of the UN General Assembly to discuss how to improve accountability for peacekeeper abuse, bring perpetrators to justice, and better support victims. These high-level discussions must be complemented by concrete actions on the ground, including faster investigations, more transparent reporting, better community outreach, and sending home offending troops.

Peacekeepers are an essential step to protecting civilians in CAR, but troops alone can’t address the roots of the crisis. In addition to strengthening MINUSCA, the international community must invest in efforts to resolve political grievances that enabled the violence. Recent positive developments show that President Touadera is trying to elevate unrepresented communities and work with other African governments on mediation efforts to restore peace. International support for these approaches is essential as is increased financial support for local reconciliation efforts that address the fears and needs of religious and ethnic communities.

Central Africa has suffered too many atrocities in recent years, but where the United States has helped lead international efforts, the global response has saved lives. In the coming weeks, the United States and other countries must work to avert a pending crisis in the Central African Republic that, if left alone, could degenerate to genocide.

Aditi Gorur is the director of the Protecting Civilians in Conflict program at the nonpartisan Stimson Center.