How America Can Avoid a War with China 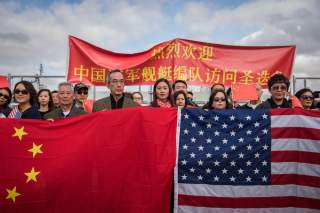 Sino-American relations seem to be at a crossroads, though exactly where the relationship is headed is anyone’s guess. President Trump’s scattershot approach to public diplomacy and policymaking has thus far sparked more questions than answers. Is he acting irresponsibly and provoking unnecessary conflicts, or is he shrewdly testing Beijing’s resolve before he challenges it on trade and security matters? Will he successfully maintain America’s leading regional role, or will his nationalism encourage the other Asia-Pacific nations to make their own deals with China? Will these nations be gradually drawn into a China-led regional order?

There is no denying the sheer scale of U.S.-China relations. As former secretary of state John Kerry stated in 2014, “The U.S.-China relationship is the most consequential in the world today, period, and it will do much to determine the shape of the 21st century.” Yet “consequential” does not mean “amicable” or “mutually beneficial.” While advocates for greater bilateral engagement can cite many reasons for optimism, especially the formidable economic ties between the two nations, others make a plausible case that the importance of these ties is overstated.

The root causes of bilateral friction outnumber the sources of cooperation, though a U.S.-China military conflict is by no means inevitable. This essay suggests that the new administration can maintain a balance in the Western Pacific if it actively engages China in a few key areas of mutual interest.

First, the positives. The two nations share an interest in a stable, peaceful Pacific rim—especially a peaceful, nonnuclearized Korean Peninsula. Washington, DC policymakers know that any effort to limit North Korea’s nuclear ambitions will have to involve China, and Beijing has a clear interest in limiting the Pyongyang regime’s provocative gambits. Moreover, a lasting reduction in Korean tensions would create a peace dividend that would allow China to further develop its northeastern provinces.

America and China’s vast economic ties give each side a stake in the stability and growth of the other. “Chimerica”—Niall Ferguson and Moritz Schularick’s term from a decade ago—is still a useful heuristic. In 2015, the two nations traded $660 billion in goods and services, and China overtook Canada as America’s top trading partner. Beijing’s purchases of U.S. Treasury securities have not only stimulated Chinese exports, but they have also contributed to low U.S. interest rates. (As of November, China held $1 trillion in U.S. debt.)

China has, for many years, sought the resources of developing nations, and it now seeks to invest more into stable, developed economies. Its overproduction in some sectors, especially steel, makes this transition even more important. Chinese investment in the U.S. real estate market passed the $300 billion threshold between 2010 and 2015. Chinese business entities invested a record $45 billion into the United States in 2016—triple the 2015 figure, and up from almost nothing a decade ago. American businesses put $75 billion in foreign direct investment into China in 2015. If the two nations complete and ratify the U.S.-China Bilateral Investment Treaty, such investment would surely increase.

Beijing and Washington consult on a variety of other issues. They have notched some notable environmental achievements, including President Obama and President Jinping’s joint signing of the Paris Agreement last September. The annual U.S.-China Strategic and Economic Dialogue explores solutions in economic transparency, currency reform, exchanges of energy data and other areas. As for cyber security, the September 2015 agreement was, in one observer’s estimation, “a potentially important first step” toward addressing cyber espionage. The two sides still spy on each other, and there is much disagreement on internet governance and information flows, but Chinese hacking may have decreased since the agreement.

There has even been some low-level naval cooperation. China has participated in the U.S.-sponsored, twenty-six-nation Rim of the Pacific multinational maritime exercise since 2014. Although the invitation to China has not been without controversy, the exercise does promote regional cooperation in noncombat areas such as search and rescue, disaster relief and counterpiracy.

Counterterrorism is another area of some common interest, though not one of much direct cooperation. Since both nations seek a stable, secure international order, they oppose transnational threats to that order. Washington and Beijing exchanged some intelligence in the wake of the September 11 attacks, and in more recent years they have commenced an annual counterterrorism dialogue. China faces Islamist and separatist threats in its western provinces and in neighboring states, as evidenced by the August 2016 suicide attack on the Chinese embassy in Kyrgyzstan. Moreover, China’s expanded relations with Pakistan and Afghanistan increase its security interest in those strife-torn nations. The prospect of Xinjiang (Uighur) militants fleeing across the border gives added impetus to this interest. China’s counterterrorist goals will only increase with the expansion of the “One Belt, One Road” initiative, which is already tying China more closely to other Eurasian nations.

Finally, Sino-American relations are also strengthened by “soft ties” in the form of educational and cultural exchanges, tourism and family connections. The more than three hundred thousand Chinese nationals studying in America add $10 billion to the U.S. economy annually, and the graduates who stay contribute in countless ways. America is also pulling in more than 10 percent of the more than $200 billion Chinese tourist market. A few million Chinese tourists visit the United States every year, and a few million Americans visit China. There is a flight between the two countries every seventeen minutes. Family connections are also considerable. There are now more than two million Chinese-born immigrants in America, making them the largest group of newly arrived immigrants and the third-largest overall.

These connections and areas of cooperation are heartening, but they are generally overshadowed by the many sources of Sino-American disagreement. For starters, there are substantial regional security differences over the Korean Peninsula, Taiwan, the East China Sea and the South China Sea. America’s five security treaties in the western Pacific commit Washington to defend Japan, South Korea, the Philippines, Australia, New Zealand and Thailand. Since these treaties all date from the early Cold War era, there are questions about their raison d’être today. (NATO is under similar scrutiny.) There is no U.S.-Taiwan treaty, but Washington maintains an informal partnership with Taipei via the terms of the 1979 Taiwan Relations Act. China still upholds its 1961 treaty and quasi-alliance with North Korea, though this does not guarantee Chinese support if Pyongyang starts a conflict.

The broad regional differences in Asia are worth noting. Northeast Asia (Japan, Taiwan, the Koreas and eastern China) is relatively prosperous and is characterized by a comparatively high degree of economic interdependence, though the region is also heavily militarized and its interstate relationships are tense. Southeast Asia is relatively less developed on average, though it has a low level of militarization and no unresolved interstate conflicts. The ten members of the Association of Southeast Asian Nations run a wide gamut, from the wealthy microstates of Singapore and Brunei to the struggling economies of Cambodia and Myanmar.

America has more direct interests in the northeast/East China Sea region, where the United States and China are on opposite sides in disputes over the Taiwan Strait, the Korean Peninsula and the Senkaku Islands. North Korea’s nuclear program is perhaps the most acute flashpoint between Washington and Beijing. China and the United States are signatories to the Non-Proliferation Treaty, and neither wants North Korea to possess nuclear weapons. But Beijing only lightly admonishes Pyongyang because it fears a regime collapse that would threaten regional stability and send thousands of desperate North Koreans into China. Beijing has backed UN sanctions against Pyongyang three times under Xi Jinping, but Chinese merchants still send plenty of goods into North Korea.

China’s claims of sovereignty over the Paracel Islands, the Spratly Islands, Scarborough Shoal, the Senkaku Islands and a portion of the East China Sea seafloor are another source of disagreement. These assertions bring it into conflict with the region’s other claimants: Japan, the Philippines, Vietnam, Taiwan, Malaysia and Brunei. Beijing became more assertive in 2009, due in part to a recession-weakened America, and it has gained attention for island building in the Spratlys and for recently placing weapons at its new airbase there. Chinese leaders insist that the weapons are defensive, but their actions raise the question of whether China will be a “responsible power” in the years to come. Beijing’s archipelagic disagreements with Southeast Asian nations are offset somewhat by its expanding business and infrastructure projects in those nations.

Much is at stake in the South China Sea, including military preeminence in contested waters, hegemonic influence over the world’s busiest shipping lanes, the rights to seabed fossil fuels and fishing grounds, and national pride. Beijing bases its claims on perceived historical dominion over these seas, and it expresses a strong interest in overcoming past humiliation and becoming a major maritime power. China’s more nationalistic opinion shapers maintain that the country’s actions have been consistent with those of rising powers in the past, e.g., America’s extension of hegemonic influence in the Caribbean a century ago.