How America Can Counter Russia and Iran 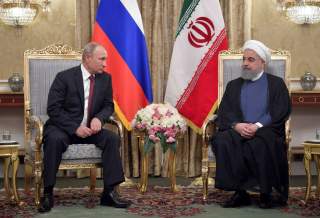 United States President Trump's withdrawal from the Joint Comprehensive Plan of Action (JCPOA) re-opens America's gun ports for an economic broadside to punish Iran's continued destabilizing activities throughout the region. However, without a unified effort with the European Union and America's regional allies, there is the danger that Russia stands to gain from the geopolitical melee.

The JCPOA’s primary flaw is it failed to rein in Iran’s destabilization of the region vis-à-vis its proxies, its ballistic missile program, and its cyber operations—all while rewarding such behavior through increased foreign direct investment. This guaranteed financial support prevented the United States from imposing economic consequences against the Islamic Republic and allowed the Ayatollah’s Revolutionary Guards Corps to operate across the region and the globe with impunity.

Labor strikes and anti-regime sentiment are boiling beneath a lid that has long been clamped down upon by the regime. But the more repressive the regime grows, the more vocal and visceral the protests become. Demonstrations in Mashad in December and January; protests in Karzun in May; and ongoing trucking strikes have pitted religious, working-class Iranians against the ruling clerics. With growing impudence, protesters now address the regime directly: “Be afraid, be afraid, for we’re standing together!” The false promise of the Islamic Revolution and the resulting economic crisis, rampant corruption, and endless interventionism abroad have emboldened the Iranian people.

This internal unrest might present an enticing moment for the United States to unilaterally exert maximum pressure through the re-imposition sanctions established by the Iran Sanctions Act of 1996 and the Comprehensive Iran Sanctions, Accountability, and Divestment Act of 2010. However, this strategy bears significant risks. Severe unilateral sanctions could give justification for Iran to completely abrogate the JCPOA and restart its nuclear program—a move that would likely invite an Israeli kinetic response resulting in open war across the Middle East. Sanctions could also exacerbate an already volatile internal situation, leading to regime collapse and a power struggle that would likely see a military strongman, such as Qods Force Commander Qasem Soleimani, take the helm. Or sanctions could back-fire and bolster support for the clerics by engendering anti-U.S. sentiment amongst Iranians, thereby further entrenching the regime.

Each of these possible outcomes carries with it various consequences for the national security of the United States and its allies. Regardless of the aftermath, the primary benefactor of continued instability in the Middle East is the Russian Federation.

The Russian economy is expanding timidly—1.5 percent in 2017—following two years of recession. However, Russia's economic success is predicated mainly upon its oil and gas exports. Fortunately for Moscow, oil prices are up from $27 a barrel in 2016 to the current level of around $76 a barrel. This nearly tripled price of Brent Crude Oil is due in large part to agreements amongst oil-producing countries to cut production to reduce the glut of stockpiles resulting from the market crash between 2014 and 2016. Additionally, instability in Venezuela and the Middle East add to the rising price. As the head of the Russia Direct Investment Fund Kirill Dmitriev reported, this price increase alone has resulted in a three trillion ruble ($49 billion) expansion of the Russian state budget.

Last month, during the St. Petersburg International Economic Forum (SPIEF), Russian Central Bank Governor Elvira Nabiullina outlined President Putin's ambitious economic plan "whereby the Russian economy grows at rates above world levels, this means almost four percent." For that level of growth to be achieved in the face of continuing sanctions resulting from the annexation of Crimea in 2014, Russian President Vladimir Putin cannot stake his country's economic viability on market forces and tepid relationships with other oil-producing nations. To tilt the table in his favor, Putin is intentionally destabilizing key regions both to enable artificially elevated oil prices and to ensure a lasting market for Russia’s export of weapons systems and nuclear energy production facilities.

Presently, it seems Russia’s destabilizing investments in Syria through its continued support for President Asad and for Iran amassing forces along the Israeli border have effectively worked. While these actions have rendered the Middle East a powder keg, Putin has forged alliances on both sides of the conflict. He has done this by finding common ground with Saudi Arabia regarding oil output and by continuing his support for Iran and Turkey both militarily and in the United Nations. But Putin’s coup de grâce for Russia’s ailing economy is just beginning.

Russian Energy Minister Alexander Novak told reporters at SPIEF that he expects Iran's overall oil output will not be reduced by more than ten percent as a result of President Trump's withdrawal from the JCPOA, estimating the total "geopolitical risk" premium to be $5-$7 per barrel. With this optimistic view, Russian and Saudi Arabian oil ministers met to discuss easing the oil cuts enacted in 2017 and reportedly discussed an increase of one million barrels per day.

While it may seem counterintuitive that Russia would push for increased global output that will drive oil prices down, in light of current geopolitical events, Putin is merely executing the next phase of his economic plan. Taken at his word, Putin’s target price of $60 per barrel indicates Russia can absorb a short-term pullback in exchange for significant long-term gains.

In March and in April of this year, Russia pumped at a rate of 10.97 million barrels per day—only 277,000 barrels shy of its thirty-year record. (That high water mark was reached in October 2016 when Brent Crude was trading at $50 per barrel.) An increase in production this year works for Russia when combined with renewed U.S. sanctions against Iran, continuous war and unrest in Syria, and a failing oil industry in Venezuela. In fact, all of this could well double Russia's 2016 oil revenues.

As a result of Putin's shrewd manipulation of events in the Middle East, Russia is positioned to benefit the most from the United States' strong approach towards Iran. The dilemma for the United States is how to punish and contain Iran's destabilizing actions while preventing Russia from reaping the economic rewards of the resulting destabilization.

Iran's goals with regards to the JCPOA are to avoid a new round of broad-based international sanctions and to drive a wedge between the United States and its European allies. Russia shares this latter goal because it ensures a destabilized Middle East and foments distrust amongst U.S. coalition partners.

Russia and Iran are inextricably linked. Russia poses the single most significant existential threat to the collective security of Europe. European leaders need only to look to the annexation of Crimea, the nerve agent attack in Salisbury or to social media information operations in the United States for evidence of Russia's increasingly brazen disregard for international law. Without a unified coalition exerting economic and diplomatic pressure on Iran, U.S. efforts will likely fall short and Russian audacity will continue to threaten Europe and the world.

Russia wants a destabilized Middle East. A unified front by the United States and the European Union is key to success in Iran—and in countering Russia. The United States can certainly strong-arm its European partners by imposing secondary sanctions on companies doing business with Iran; however, this tack would likely only further divide the U.S. and the EU while advancing the geopolitical goals of both Russia and Iran.

Given the vulnerable economic and political position in which the Iranian regime currently finds itself, a unified pressure campaign against Iran would check Russian regional influence and force Iran to the negotiating table. This regional and international economic pressure against North Korea resulted in an unprecedented summit and pledges between President Trump and Kim Jong-un for a peaceful resolution to a conflict seeming to spiral towards nuclear war. Without Chinese and European support for these American-led sanctions, the summit with Kim never would have been possible. Similarly, without European involvement in unified economic sanctions to punish Iranian malfeasance, a peaceful outcome in the Middle East will not be possible, and Russian influence will continue to expand unchecked.

Michael McLaughlin is a Naval Intelligence Officer at United States Cyber Command. His foreign tours of duty include multiple postings to the Far East, the Middle East, and Europe. The views and opinions expressed in this paper and/or its images are those of the author alone and do not reflect the official policy or position of the U.S. Department of Defense (DoD), U.S. CYBERCOM, or any agency of the U.S. government. Any appearance of DoD visual information or reference to its entities herein does not imply or constitute DoD endorsement of this authored work, means of delivery, publication, transmission, or broadcast.