How America Can Meet China's Challenge 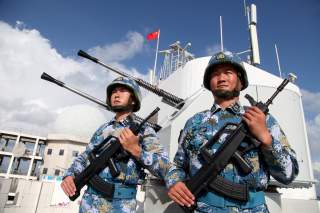 The gloves are off. China and the USA now speak openly of their competition for regional and global influence. The two countries hold clashing views on many international issues, so each perceives some of its own interests jeopardized by the other’s pre-eminence. The Chinese government is engaged in a long-term, multifaceted campaign to maintain the Chinese Communist Party’s (CCP) monopoly on political power within China, to enrich China, and to make China militarily strong. These goals need not intrinsically threaten the United States, but President Xi Jinping’s government is pursuing his agenda at least partly by undercutting vital U.S. interests.

In this momentous national competition, China’s authoritarian political system gives it three possible advantages over the liberal-democratic United States. First, China’s top national leadership has a relatively strong hand to make major policy decisions and impose them on society and local government. Xi faces no checks-and-balances system as the one that exists in American governance. Second, the Chinese state deeply penetrates the Chinese economy and society, allowing the state to employ what in other countries would be considered private activities in the fulfillment of regime objectives. The PRC government can call on commercial fishing boat captains, for example, to participate in a strategic operation in the South China Sea, or task Chinese students studying in the United States to spy on their comrades or show the flag at a public event, or order corporations to turn over data on customers. Third, there is exceptional continuity in China’s one-party system, maximizing China’s ability to carry out long-term plans.

Defeatism, however, is neither justified nor honorable in this case. While an authoritarian political system offers some apparent advantages, it also saddles the CCP regime with inherent problems that undercut China’s chances of overall success.

The 19th Party Congress made clear the regime’s intention to place the Party in control of not only all government activity, but also the economy, academia, the media, culture, and many aspects of Chinese society (hence, for example, the crackdown on religion under Xi’s tenure). This represented a renunciation of the idea of separating Party and government lines of authority, which some Chinese elites had long advocated. Arguably, China’s main developmental advances during the modern era occurred when China relaxed its opposition to foreign ideas and institutions (as with Deng Xiaoping’s “reform and opening up”) while development stalled when China’s leaders insisted on vilifying the West and doing things “the Chinese way.”

Command economies can organize and mobilize resources to achieve specific national goals, but historically they do not generally outperform privatized economies. Ideology, overemphasis on political correctness and sycophancy, and cautious bureaucratism could stifle economic and intellectual entrepreneurship in such an environment. China seems to be experiencing the latest pendulum swing in the old debate over “red vs. expert.” If China is retrogressing toward the view that a socialist train running late is better than a capitalist train that runs on time, this should be encouraging to a competitor.

By recentralizing power, Xi has gained tenure for life. But there are at least two major disadvantages of a single leader holding dictatorial powers. First, there are minimal safeguards against him decreeing what could turn out to be a disastrous policy for the country. Second, a permanent one-man dictatorship makes the system more brittle by permanently freezing out senior figures from other factions. Other elites who oppose Xi will now lack an institutional path to power, causing frustration that could eventually result in the eruption of a messy power struggle that disrupts the government’s agenda for national development.

Although the United States should not concede the contest to China, Americans should recognize that the challenge China poses to the U.S.-sponsored international order is unprecedented. Unlike the Soviet Union, China may combine first-tier military, economic and technological capabilities if it continues its rapid growth and maintains internal political stability. While recognizing China might falter before achieving great-power status, Americans are right to prepare for the possibility that current trend lines continue.

The Chinese government is systematically taking advantage of the relative openness of American society to further a narrow and self-interested Chinese government agenda. The Chinese campaign to exploit this access is unprecedentedly broad and well-organized. To some extent China has increased its national power relative to the United States by playing within the rules of the liberal international system and the laws of the United States. In other instances, however, China competes in violation of accepted rules and norms. The most prominent example is Chinese government organization of cyber espionage—not only to gain defense-related information but also to steal foreign industrial secrets for the benefit of Chinese firms. China is also frequently accused of systematically violating some of the international agreements it has signed, including the World Trade Organization rules, the United Nations Convention Against Torture, and the United Nations Convention on the Law of the Sea.

Most challenging, perhaps, are Chinese tactics in ethically murky areas that are not easily addressed by international agreements. One such method is the Chinese use of “sharp power,” which I define as surgical economic coercion. In 2016–17, for example, Beijing curtailed trade with South Korea as punishment for Seoul’s deployment of the THAAD missile defense system. In 2012 Beijing punished the Philippines over the South China Sea territorial dispute by cutting the import of Philippine bananas. In 2010 Beijing allegedly ordered a halt to rare earth metals exports to Japan over a similar dispute in the East China Sea.

With China’s recently enhanced global economic influence, there is growing potential for Chinese sharp power to appear more frequently and closer to home.

If it’s bananas for the Philippines, then an American economic vulnerability to China is the reliance of U.S. higher education on Chinese students. China is the country that supplies the most foreign students to U.S. colleges—over three hundred thousand—and they usually pay full fees. In 2017, after the University of California at San Diego invited the Dalai Lama to speak on campus, the Chinese government retaliated by announcing it would cease providing funding for Chinese students to attend the university.

A second way China fights dirty is through lack of reciprocity. Chinese law requires U.S. firms operating in China to join with a partner Chinese company and to reveal their trade secrets, providing a huge boost to Chinese industries that seek to eventually displace these U.S. firms from the marketplace. There is no comparable legal requirement for foreign businesses in the United States. United States and other Western journalists based in China are frequently restricted or even harassed, while Chinese journalists in the United States enjoy freedom of the press. The availability of information that could embarrass public officials or support a critique of the political system is vastly unequal between China and the United States.

A third gray-zone arena is propaganda warfare. Beijing’s effort includes providing CCP-approved “alternative facts” or viewpoints on controversial issues as well as simple distraction from unflattering events by emphasizing the wonderful things the Party is accomplishing. The Chinese government spends about $10 billion per year to promote a positive image of itself abroad, grossly outmatching the United States government, which spends a little over half a billion.

Finally, China buys off useful individuals in target countries and directs them to take actions in support of Beijing’s agenda. While corruption is a universal problem, the Chinese are unusually well-prepared to practice it on an industrial scale. Australia’s recent experience is instructive. China is by far the largest source of foreign money donated to political campaigns in Australia. Two high-profile cases there demonstrate China’s modus operandi. Andrew Robb, Australian Minister of Trade and member of Parliament until 2016, repeatedly made pro-China public statements, often echoing standard CCP propaganda points such as alleging a U.S. attempt to “contain” China, Americans being stuck in a Cold War mindset, and the benefit to Australia of distancing itself from Washington. Under Robb’s watch, a Chinese-owned company called Landbridge controversially won a contract to manage the strategically important port of Darwin, which also regularly hosts U.S. Marines. Immediately upon retiring from politics, Robb took up a vaguely-defined position with Landbridge with a salary of $880,000 per year.

In 2016, Australian Senator Sam Dastyari publicly defended China’s South China Sea claims and said Australia should not get involved in the dispute (i.e., should not side with critics of Chinese policy). He also reportedly urged a fellow politician from his party not to meet with a Hong Kong pro-democracy activist in 2015. Media later reported that a Chinese company and a Chinese billionaire with links to the CCP and had covered nearly $50,000 in personal travel and legal expenses racked up by Dastyari. The scandal forced him to resign from the Senate.

In December 2017, Prime Minister Malcolm Turnbull’s government introduced legislation to ban foreign political donations and to more tightly regulate foreign lobbyists, noting that “foreign powers are making unprecedented and increasingly sophisticated attempts to influence the political process.” The official response from the PRC fit a well-known Chinese pattern of total denial of the accusations combined with vilification of the accusers. The Chinese Embassy said that “China has no intention of interfering in the internal affairs of Australia, nor does it intend to influence the political process of Australia through political contributions,” and accused Australian media and officials of “Cold War mentality,” “hysteria,” “paranoia” and “unscrupulous slander.” A commentary in the CCP-owned People’s Daily sought to internationally shame Australia, saying “The racist and hysterical paranoia of the Australian media had tarnished the country’s image as a multicultural society.”