How America Could Lose Its Most Powerful National Security Tool 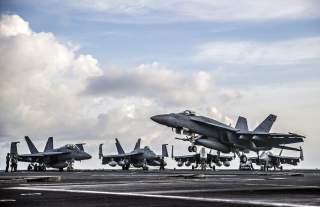 Debates over America’s relative decline associated with the rise of China as a military and economic power have increasingly become commonplace. As the new National Defense Strategy underscores, we live in an era of great-power competition. The erosion of the United States’ military edge against adversaries and competitors have recently gained enormous attention. However, this is not the first time the United States suffered from a sense of decline and erosion of their military edge. Some diplomatic historians have argued that the events and policy choices in the 1970s laid the foundation for the United States’ unipolar moment after the end of the Cold War. That was also a time when the United States suffered from a sense of decline, which largely stemmed from the discouraging experience with unconventional warfare in Vietnam. This prompted defense officials to embrace the Second Offset Strategy or the Competitive Strategy, which emerged under the Carter administration and gained momentum under the Reagan administration. Some may argue that the competitive strategy that culminated into the Revolution in Military Affairs (RMA), which reached a pinnacle in the First Gulf War in 1991, was consequential for American primacy in the 1990s.

An comparison between the late 1970s and the 2010s illuminates the cyclical nature of this debate that animates U.S. defense policy. Prolonged counterinsurgency campaigns abroad—either in the Indochina or the broader Middle East— exhausted American power, triggering a sense of relative decline. The sense of decline was translated into the perception that the U.S. military edge against competitors was eroding, which encouraged the United States to shift to a competitive strategy in a great-power context. It is fair to say that the first attempt to do so in the late 1970s and 1980s was a success. This may make one optimistic about the future of American primacy. As the United States embraces a competitive strategy, it is possible that the United States could maintain its primacy once again. Will history repeat itself?

Two major hurdles make the competitive strategies of our time different from the one during the Cold War, cautioning us from too optimistic. The first one stems from eroding domestic support on America’s global commitment. The other involves the nature of the means that America’s competitors adopt in challenging American primacy. As Dr. Hal Brands said so eloquently, “preventing an increasingly confident great power from remaking the East Asian order, and perhaps challenging U.S. interests globally, will be the defining challenge of American statecraft in the twenty-first century.” Whether the United States could overcome these hurdles would be consequential for the outcome of the competitive strategy of our time as well as for the future of the liberal international order.

First of all, domestic support for America’s role in defending the liberal international order has been diminishing in the post–Cold War era. As a superpower, the cost of protecting the status quo needs to remain profitable for the United States to preserve its overseas commitments. This is reflective in the dichotomous debate over U.S. global commitments between proponents of deep-engagement and offshore balancing. While the future of the U.S. appetite to engage in global affairs will be determined by several different factors, it is fair to argue that the United States has had an encouraging record in consolidating U.S. presence and facilitating security networks that function to preserve the status quo in the post-Cold War world.

As a matter of fact, American presence in the Indo-Pacific region has been steadily consolidated after the end of the Cold War. The term “Indo-Pacific” has gained wider currency as the Trump administration adopted an Indo-Pacific strategy as its flagship regional policy. This concept, which incorporates India into the strategic framework in the Asia-Pacific region and underscores the rising maritime awareness among like-minded nations in the area, illuminates the evolution of the U.S.-led security network in the region.

In order to understand this multilateral security framework, it is useful to review the trajectory of the two major nations that are involved in this concept: Japan and India. These two powers used to be pacifist nations that eschewed viewing military power as a major component of their national strategy. That has gradually shifted after the end of the Cold War, when the two nations were urged to reconsider their role in international security. In other words, the resurgence of the nations as active players in security affairs occurred before Chinese maritime expansion started to challenge the status quo in the region.

It is tempting to simply label the rise of Japan and India as balancing behavior. It is indeed a relevant factor but yet insufficient in explaining why Japan and India’s resurgence started in the mid-1990s, which gained momentum in the 2000. The “Rebalance to Asia” as well as the current Indo-Pacific Strategy are products of the chain of policy shifts in Tokyo and India that gradually started since the 1990s. This has accelerated as a response to Chinese maritime expansion. Nevertheless, it is worth highlighting that the main motive behind their proactive policies is to preserve and foster the maritime status quo, which was also informed by their increasing maritime awareness.

The United States has also certainly played an enormous role in facilitating this emerging maritime security network throughout different past administrations. In order to incorporate India into the strategic framework and strengthen U.S.-Indian defense relations, the civilian nuclear agreement between Washington and Delhi, which was reached in the mid-2000s, was a prerequisite. On the other hand, Washington had repeatedly encouraged Tokyo to play a larger role in regional security throughout the past quarter of a century. The emerging security network among the United States, Japan and India, which has become increasingly visible, was not possible without the chain of policy choices that paved the way for this to happen.

This trajectory of the regional-security order also highlights the changing role of U.S. allies. The “Indo-Pacific” is also a concept that Tokyo has been actively promoting. This concept has culminated into initiatives such as the so-called “quad,” which includes Australia into this collaborative platforms among like-minded maritime nations in the Indo-Pacific region. In fact, the origin of this concept was first unveiled by Prime Minister Shinzo Abe in front of members of parliament in India in 2007 in a speech titled the “Confluence of the Two Seas.” These observations underscore the evolving nature of the U.S.-led security network in the region from a bilateral-based hub-and -spokes system to a multilateral one, highlighting the changing functions of alliances in the post–Cold War era. The U.S.-led security network is transforming itself into a status quo preservation mechanism with allies and strategic partners playing an enhanced role.

The trajectory of the regional-security framework in maritime Indo-Pacific demonstrates a positive picture on U.S. presence as well as the roles U.S. allies and strategic partners have played in preserving the status quo. However, the inconvenient truth is that China has adopted incremental and indirect means to challenge the maritime status quo in the East and South China Seas, producing an increasingly hybrid strategic environment. China appears to be pursuing Mahanian ends to dominate the maritime domain through Sun-Tzu-inspired indirect means.

These tactics that China has adopted to challenge the status quo is the second hurdle that the United States faces in implementing competitive strategies. Asymmetric tactics are often chosen when a power weaker than the opponent seeks to challenge the stronger power. The fact that China has to resort to these tactics demonstrates that the United States still maintains some military advantages and that the U.S. presence in the Indo-Pacific region—including the evolving security network among its allies and partners—is solid. Moreover, many scholars have argued that it will take decades for China to catch up with the United States as an economic and military power.

Nevertheless, the situation in the South China Sea warns the United States from being complacent of the advantages it enjoys. These observations suggest that mere U.S. commitment and presence as well as the preservation of the military edge are inadequate in the competitive strategies in the twenty-first century.The challenge is that China has adopted incremental and indirect means that are not only hard to detect but also hard for the United States and its allies to respond to. The risk of escalation and miscalculation prevents the United States and like-minded nations from taking strong measures to counter China’s moves to change the status quo by adopting hybrid means.

These tactics that opponents and competitors use to challenge the status quo is the largest hurdle that the United States faces in implementing competitive strategies today. Bolstering the U.S. military presence or preserving the U.S. military edge against competitors is an insufficient plan for upholding the status quo. It is worth highlighting here that the way the United States seeks to fight does not necessarily produce favorable results. As a recent study suggests, China has a record in updating its military strategy not according to the wars they fought but rather based on the general trends in conduct of warfare in the international system, particularly that of the United States. In other words, for the United States, simply pushing forward the desirable way to fight would not necessarily result in favorable outcomes. It is imperative to consider ways to offset the means that the competitors adopt in order to prevent incremental changes to the status quo instead of only focusing on technology.