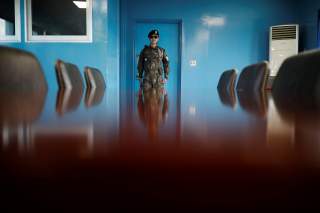 The much-awaited U.S.-North Korean summit—yet unscheduled—might just get something done, if imperfectly. Two accomplished showmen, each a national leader and fully invested in making this a success, hype the Summit’s potential. Mooted times and proposed locations add intrigue and suspense. This is like a Super Bowl countdown with no set date or stadium. Unilateral declarations and concessions without details are mooted. Kim appears so accommodating on nuclear capability, release of detained—more accurately: imprisoned—U.S. citizens, and retention of U.S. presence in South Korea that he’s suddenly moved from brutal tyrant to honorable statesman. The Olympic “charm offensive” worked. But, what do we have to lose? After all, if a “good deal” is not on offer, we can always walk away. Right? But what is inside a “good deal”?

Many precedents and diplomatic norms were crushed to get to this point. But the “way things have always been done” failed to produce results. North Korea’s nuclear ambition was made clear twenty-seven years ago. Our conventional diplomatic efforts since then, and even unconventional proposals like the Korean Peninsula Energy Development Organization to provide North Korea with light-water reactor power generation, failed to produce results. Now not only North Korea, but China and Russia, are in full pursuit of fundamental change to the global liberal international order that prevented yet another great power war throughout the Cold War. That global order also generated economic recovery. It looks like it’s well past the time that we can continue to admire the problem and be content with conventional diplomacy and bargaining. If we are to arrest the progress of the revisionist powers, North Korea may be a good place to start. But hazard awareness is essential.

Perhaps we can find a diplomatic adaptation of the physicians’ Hippocratic Oath: First, do no harm. Adapted for this event: Do nothing that will allow Kim or China or Russia to damage our alliances.

Kim has proven one thing as we head toward this summit. Nuclear weapons work. They provide great leverage. Kim got great photo ops and a sumptuous dinner reception with Xi Jinping and a similar summit with President Moon. Perhaps more significant, no U.S. president ever met with his father or his grandfather, yet now we are eager to do so, and coming to him. Kim’s early education at his comfortable European school included watching in grisly fascination the killing of Muammar el-Qaddafi. That day’s lesson showed what happens to tyrants who give up nuclear arsenals. Abandoning our agreement with eleven nations in the Trans Pacific Partnership and backing away from international agreements within the Joint Comprehensive Plan of Action over Iran’s nuclear program show how unilateral and temporal these things can be. Hoping that elimination of Kim’s nuclear capabilities is on the cards at this pending summit is fanciful. We need to think of other outcomes.

The Park-Kim Summit made history. The images and symbolism of the leaders holding hands while stepping back and forth across DMZ border markers ignited optimism around the world. Kim’s stated willingness to move toward denuclearization and from Armistice to Peace Treaty may open a door to greater stability. Peace, or at least absence of hostilities in our time, perhaps?

Pursuing a treaty to end the Korean War is certainly a worthwhile endeavor. It’s better than the alternative, and how can we refuse? It’s been tried before. China’s Zhou Enlai proposed a treaty in 1954. The current armistice agreement, signed in July of 1953, sought a “complete cessation of hostilities and of all acts of armed force in Korea.” Since its July 1953 signing by the UN Command, the North Korean People’s Army and the Chinese People’s Volunteer Army, we’ve endured deadly provocations, including assassinations, ship seizures, ships sunk, aircraft shot down, armed infiltrations, artillery shelling, and other violations. The ROK Blue House and the ROK Cabinet endured separate attacks. U.S. soldiers were murdered in the DMZ. But in general, the Armistice held. So far. Now the growth of North Korea’s destructive power—nuclear, chemical, biological and cyber—and its global-power projection capability mandate a look for solutions beyond armistice. A valid, enduring treaty capable of bringing stability out of this knife-edge existence would be a wonderful thing.

We will be negotiating with something very different than a conventional nation-state. The very nature of the North Korean regime, often called with accuracy the Kim Family Regime (KFR), decisively affects Kim’s strategies and goals. The regime, with no visible legitimate means of support common to national life elsewhere, thrives. The elite, the KFR, and somewhere between one and three million core supporters, live well. They must be kept happy. Now the regime poses a global threat as well as its familiar, enduring regional menace.

Too small for survival as an autarkic economy like the Soviet Union and surrounded by much larger neighbors with a history of competition over the peninsula, the KFR consistently confounds conventional wisdom. We assumed that the end of Soviet subsidies following the USSR’s collapse meant the end of North Korea. Far from collapse, in 1991 we learned of North Korea’s vigorous pursuit of nuclear weapons capability. Perhaps the KFR profited from Pakistani nuclear physicist and metallurgical engineer Abdul Qadeer Khan’s entrepreneurial approach to nuclear proliferation.

We worked for strong sanctions resolutions at the United Nations. North Korea repeatedly declared sanctions an act of war. In June 1994 this became a crisis. U.S. forces not already in the region prepared for deployment. Secretary of Defense William Perry later admitted that we were “looking into the abyss.” Then former President Carter appeared in Pyongyang and offered a face-saving way to cool the immediate crisis. The crisis receded but did not end. With this denouement, we established—perhaps unwittingly—a cycle destined to repeat with subsequent KFR outrages. The KFR commits some outrage, we consider preemptive attack, then move to negotiations, agreements, to KFR cheating, to sanctions, then sanctions erosion, and inevitably a return to provocation as North Korea wills. Over time the outrages reveal continuous rapid growth of North Korean capability.

The Kim family regime gains this remarkable success as a product of “criminal sovereignty.” “North Korea uses state sovereignty to protect itself from external interference in its domestic affairs while dedicating a portion of its government to carrying out illicit international activities in defiance of international law and the domestic laws of numerous other nations. The proceeds of these activities are then used in a number of ways to sustain North Korea’s existence and to enable other policies. For example, criminal proceeds are distributed to members of the North Korean elite (including senior officers of the armed forces); are used to support Kim’s personal life style; and are invested in its military apparatus.”

The KFR global criminal enterprise’s interests will be at the table. Its privileged existence in many countries, declared and clandestine, must continue to thrive and provide resources to the center if the KFR is to survive. Conversely, the KFR’s success makes the global enterprise more powerful—for example: nuclear proliferation for profit. Sanctions that really are effective, and energetic international efforts to crack down on this organized crime, cannot be tolerated by North Korea. Current UN sanctions call for countries hosting North Korean laborers to repatriate them in two years. You can bet this will be on the table. Kim’s VX attack in the Kuala Lumpur Airport, in a country that hosts many Korean laborers, may also be recalled as a “capability demonstration” intended to impress hosting countries.

Networked global trade and communications ensure that events in Korea are everybody’s business, even without conflict. The issues of the peninsula cannot be separated from other regional issues, or even global issues. All will play as part of the negotiations as different parties seek compensation for their support of any settlement.

The active combat phase of the Korea War from 1950 to 1953 was largely confined to the Peninsula. To state the obvious, a future war won’t be confined. Technology ensures that we’re all within range. Japan will be a special target for both geographic and historical reasons. Japan will keenly watch the negotiations for implications on U.S. presence, and Japan’s future defense needs.

Japan is very well aware of the North Korean missile threat. On August 31, 1998, a North Korean missile flew over Honshu, Japan’s main island. Japan looks to greatly enhance air and missile defense in the very near term. It’s essential that they achieve the capability to deny Kim any assurance that he can successfully strike Japan. Surveillance and weapons capable of prompt attack of North Korean missiles before they reach mid-course flight are essential. Strike weapons may be coming.

At a minimum, Japan needs the ability to defeat North Korean missiles in boost phase. This offers deterrence by denial, reducing the KFR’s confidence of successfully striking Japan. This capability vastly devalues Kim’s recent missile and warhead investments. It would be best done as an alliance capability. That requires U.S. presence, in strength. Ultimately Japan must consider nuclear deterrence if the United States is not present, not relevant, or not trusted. South Korea will surely face similar questions. A widely proliferated region will be the result of diminished trust in U.S. deterrent capabilities. Perhaps the alternative—robust deterrence by denial—offers a way to strengthen our alliances while others seek to weaken them.