How America Is Pushing China and Iran Together 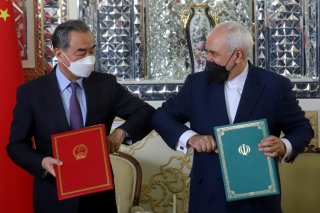 Traveling to the Middle East, the Chinese Foreign Minister stopped in Tehran to sign what is promoted as a $400 billion twenty-five-year agreement that would boost Iran’s economy, expand China’s footprint in the Middle East and deepen the strategic ties between the two countries. The agreement itself is almost breathtaking in its scope, covering agreements to cooperate on everything from infrastructure and banking to green energy and technology. But ultimately, it is a roadmap with no specific figures or tangible commitments. Even the $400 billion price tag associated with this roadmap seems to be from a poorly sourced report about the agreement from long ago. The operationalization of this agreement will take new rounds of talks and much more time. The President of the Iran-China Chamber of Commerce Majidreza Hariri said that the process will take two years.

In terms of trade, Iran’s relationship with China has been stifled by many factors. Iran isn’t even China’s largest trade partner in the region. Iran’s relationship with China at this point largely centers on hydrocarbon exports and the import of high-value industrial inputs and some finished goods while business-to-business ties remain minimal. The misperceptions surrounding the supposed girth of Iran-China business activity seem to be mainly due to hyperbolic media coverage. The relationship is politically sensitive in Western media because, as underwhelming as the reality of the Iran-China economic ties are, they still play a role in undermining Western sanctions.

To understand the depth of the challenge, consider that President Xi Jinping traveled to Iran in 2016 and signed a set of seventeen major pacts on a range of priorities with President Hassan Rouhani. These agreements are largely considered to have never actually materialized. The reasons are complex and represent evergreen problems in the relationship. For example, regarding the Belt and Road Initiative (BRI), Iran’s geographic location makes an important part of the Silk Road Project but the appetite of Chinese institutions in providing investment and loans for BRI projects in Iran seems to be stymied by sanctions concerns. The Rouhani administration faced internal division and competing priorities putting real commitment to the project out of reach.

While secondary (extraterritorial) U.S. sanctions were lifted due to the nuclear deal in 2015, the centrality of the U.S. dollar and the U.S. financial services industry in global banking still means that establishing deep financial entanglements with Iran carries serious risks for banks around the financial institutions. As investment and technical assistance sit at the heart of China’s push to incentivize cooperation in favor of its grand infrastructural ambitions, the absence of it was important. Broadly speaking, as Iran’s international trade volumes were still underwhelming in the aftermath of the nuclear agreement, domestic investments seemed more pressing than projects aimed at transregional trade. Iran’s involvement with the BRI initiative remains tangential.

There are many barriers to a more productive Iran-China economic relationship but they are largely underpinned by a few major factors. The great power-middle power dynamic that defines the Iran-China relationship is characterized by a significant built-in asymmetry and a preoccupation with the West. Both China and Iran have historically prioritized their relationship with the West over their ties to one another. China supported multiple United Nations Security Council resolutions to seem cooperative with the United States or in exchange for unrelated concessions. Chinese firms, especially banks, have been resistant to doing business with Iran due to fear of sanctions, stifling a broad range of economic interactions.

Even special vehicles designed to facilitate such commerce seem strongly influenced by sanctions. In one major episode, China’s state oil conglomerate slowed work on a major Iranian upstream oil project, reportedly due to Beijing’s desire to strengthen energy cooperation with the United States—further underlining Iran’s abandonment anxiety. This was particularly damaging to the perception of China among Iranian leaders and the public as the oilfield in question, South Azadegan, is shared with Iraq. This meant that production delays on the Iranian side resulted in more of the oil being sold by Baghdad.

On the Iranian side, conservatives have criticized President Rouhani for what they consider to be his lack of commitment to the serious economic opportunities presented in China so as to chase diplomatic and economic arrangements with the West that never materialized. Some have defended President Rouhani, raising such important points as China being Iran’s top trading partner. However, in business circles, there seems to be broad agreement that some opportunities have been missed.

Lack of proper coordination regarding trade regulation is a key problem and diplomatic interactions between the two countries have been criticized as palace diplomacy that lacks depth beyond grand summits. This is likely in part why the recent talks involving the roadmap did include a number of ministries led by senior officials at the Ministry of Foreign Affairs. One persistent problem with Iran’s ties with Eastern nations is the fact that Iran’s administration has historically been focused on the West. Senior officials tend to be chosen among bureaucrats who have experience dealing with Western nations. Foreign Minister Javad Zarif spent much of his professional life handling such portfolios and is well known in Western capitals.

Another key concern for Iranians is apprehension towards Beijing and its fairly strict attitudes about sovereignty. Certain historic factors make Iranians more sovereignty-focused than most. In the West, this attitude is most associated with the hostility of conservatives towards the West, but it exists in much of Iranian society in different forms. Many Iranians worry that in the absence of other investors and economic partners, China’s economic power in Iran can compromise the country’s sovereignty. Some of this, especially when mixed with xenophobia, can present in hysterical and conspiratorial ways but the underlying concern is a valid one.

Some also worry that being locked in a long-term strategic foxhole with countries like Russia and China would have negative implications for civil society and popular governance in Iran. It’s worth mentioning here that few Iranians speak Mandarin, and few Chinese speak Persian. So, despite the famous depth of civilizational ties between the two nations, most people in Iran and China see each other through the prism of Western media that can be contemptuous towards both.

This dynamic within Iran is often presented as pitting principlists (conservatives) who support stronger ties with China against moderates and reformists who do not. The reality is much more complicated. As high-profile economist Saeed Laylaz, who is generally associated with the reformist camp, said, this roadmap “both relieves pressure on the country and improves our negotiating position regarding the West. If we don’t take advantage of this opportunity, the West will never provide us with one either.”

His statements point to two realities that have been internalized over the last few years. First, that Iran must either partner with China or have no partners. Second, the only path towards lifting sanctions seems to be by discrediting them as a policy tool by frustrating their objectives with Chinese-driven economic growth. Even if the Biden administration rejoins the JCPOA, it is increasingly difficult to discern what actual benefits Iran will receive beyond higher oil sales. Banks will continue to show residence towards Iran and foreign firms will be unlikely to engage in investment and hiring in Iran knowing that the next U.S. Republican administration and maximum pressure campaign will always be around the corner.

Iran is certainly being pushed into an Eastern sphere in the great decoupling. If that does occur, it won’t be because of this simple roadmap but rather because of the larger repellent power of Washington making economic warfare campaigns a central and permanent feature of its approach towards adversaries across Asia. The United States is forcing these countries into a depth of entanglement beyond what many statesmen and scholars in each individual country thought was necessary or even preferable.

While the challenges are great, there are a number of reasons for Iran and China to be optimistic about the future of their economic ties. First, while the prospects of a return to the nuclear deal look bleak, the possibility should not be discarded. Recent statements by the U.S. administration to reporters indicate a softening of its approach. This is likely the best-case scenario as it will both allow for greater economic engagement between Iran and China while also paving the way for at least some investment from other nations for a balance that will soothe some of the mentioned sovereignty-related anxieties.

Second, a new Iranian presidential administration that will take power in the fall will likely prioritize economic ties with China more than the current administration has. But by far the most important reason Iran-China economic ties are likely to improve dramatically in the near or intermediate future is the budding Cold War between the United States and China. China’s hesitation towards Iran has long been guided by fear of unwitting entrapment into a harsher security competition with the United States. Greater business with Iran could invite a U.S. sanctions campaign. With this enhanced level of hostility now a fait accompli, it is unlikely to haunt the relationship to the same degree. What better way to probe American sanctions regimes that are likely to encircle China soon than by helping Iran undermine the maximum pressure policy that the world, including even candidate Joe Biden, has censured as both immoral and ineffectual. Since the Biden administration came to office, China has been enhancing its oil purchases from Iran and Beijing’s former ambassador to Tehran, specifically citing Washington’s more hostile posture towards Beijing, stated that China is now free from the caution it once held in dealings with Iran.