This Is How America Will Revise Its Approach to Iran 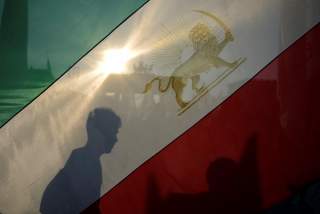 Secretary of State Mike Pompeo announced the creation of an Iran Action Group (IAG) on August 16. The new group is a substantive departure from the current policies, which have been disparate and poorly coordinated. The new policy is not only an outgrowth of President Donald Trump’s desire to withdraw from the Iran Deal, it has also been driven by Congress and the National Defense Authorization Act (NDAA), which was signed on August 6.

The NDAA’s focus on Iran went largely unnoticed when it passed Congress in July. It represents America’s attempt to confront numerous aspects of Iran’s policies in the Middle East, including Iran’s ballistic missile threat, it’s role in Iraq, Syria and Lebanon. Congress sought to provide the foundation for the administration to do more, including prodding it to draw up a strategy. Section 1237 of the NDAA notes that “the Secretary of Defense, with concurrence of the Secretary of State, may develop a strategy with foreign partners to counter the destabilizing activities of Iran.” This language was present in Pompeo’s IAG speech. “Tehran has been responsible for a torrent of violent and destabilizing behavior against the United States, our allies, our partners, and indeed the Iranian people themselves.”

Pompeo has appointed Brian Hook to lead the efforts to coordinate efforts on Iran with the IAG. The NDAA underpins his work. It calls for specification of which countries Iran is operating in, and for harnessing technology and countermeasures against Tehran’s activities. Reports will be presented to Congress annually on progress.

Of particular interest, the NDAA sought to deal specifically with Iran’s role in Iraq. One section (1234) seeks to deny funds to any group that is “known to be affiliated with the Iranian Revolutionary Guard Corps.” The IRGC and its Quds Force, which is run by Qassem Soleimani, has been increasingly active in the region. In Iraq it works through historic allies such as Hadi al-Amiri, head of the Badr Organization, and Abu Mahdi al-Muhandis of Kataib Hezbollah. Muhandis has been sanctioned by the U.S. Department of the Treasury in the past in 2009. Washington is concerned that funds from training and equipping the Iraqi Security Forces might find their way to the Popular Mobilization Forces, or Shi’ite militias such as Badr and Kataib Hezbollah.

The House version of the NDAA initially included a provision that would have targeted Asa’ib Ahl al-Haq and Harakat Hezbollah al-Nujaba, two other extreme Iranian-backed militias in Iraq. This shows that Congress was cognizant of and keen to push for specified sanctions on Iranian-linked groups in Iraq. The language was struck from the final NDAA.

The congressional push for a wide-ranging U.S. policy to confront Iran dovetails with Pompeo’s May speech regarding U.S. withdrawal from the Iran deal. In that speech, Pompeo mentioned a plethora of Iranian activity in the region that the United States wants to focus on. This includes, first, of all Iran’s proxy and allied forces. Hezbollah in Lebanon is one element. Pompeo condemned Hezbollah for supporting the Syrian regime. Congress wants the Secretary of Defense to include “detailed information in future reports regarding the regional threats posed by arms related material transferred by Iran to Hezbollah.” Congress also wants a report on the IRGC’s operations in Syria. Another proxy force that is now mentioned in the NDAA are the Houthi rebels in Yemen. They have been firing ballistic missiles at Saudi Arabia. On August 22, a delegation of Houthis met with Hezbollah’s Hassan Nasrallah.

As the United States draws up a strategy to confront proxy forces in Lebanon, Syria, Iraq and Yemen, the NDAA also encouraged more cooperation on ballistic-missile defense. This was mentioned in relation to unnamed Gulf Cooperation Council allies, which would include Riyadh as well as the UAE and Bahrain. Also, the NDAA included for the first time a provision to support anti-drone cooperation with Israel. This comes after Israel downed an Iranian drone in February 2018 that was launched from Syria.

Taken together with Pompeo’s statements, the NDAA gives Hook’s new IAG a wealth of targets to focus on. A central space that the United States will be concentrating on will be in Syria. This is because Syria represents the most complex piece of the puzzle in confronting Iran. In Yemen the conflict is more stark. Saudi Arabia and the UAE have boots on the ground working with Yemen government forces fighting the Houthis. In Lebanon Hezbollah’s role as a political and military force is a known threat and finding ways to confront it is a problem Washington has faced for many years. Iraq’s lack of a new coalition government leaves the future of the country uncertain. A government containing pro-Iranian parties would leave the U.S.-led coalition in a bind.

Syria, by contrast, is a blank slate where the administration is seeking to make a mark. The Trump administration inherited an open-ended war on ISIS and has sought to continue that war while also making sure Iran doesn’t fill the vacuum left behind by ISIS. The concerns were made clear in a new Department of Defense inspector general report covering operations from April to June of this year, which was released in August. It details how Gen. Joseph Votel, commander of U.S. Central Command, has said that the United States is already using “indirect” means to “push back against Iranian influence in Syria.” This includes interdicting weapons shipments, supporting local forces and bolstering the defenses of regional allies, the report says. In addition Iran has three thousand IRGC members in Syria as well as thousands of allied militias at ten military bases and forty positions.

The State Department is increasing its presence in eastern Syria, far beyond what a purely anti-ISIS mission would entail. In a flurry of activity on August 17, the State Department announced $300 million pledges from various countries, such as Saudi Arabia, towards “stabilization” in eastern Syria. At a briefing on the same day David Satterfield, acting assistant secretary of the Bureau of Near Eastern Affairs, and anti-ISIS envoy Brett McGurk, introduced Joel Rayburn as a new Special Envoy for Syria. In addition Pompeo swore in Jim Jeffrey as representative for Syria Engagement. He is supposed to coordinate all aspects of the conflict in Syria. Another member of the team is former Ambassador to Bahrain, William Roebuck, who previously served as political counselor at the U.S. embassy in Damascus.

Some sense of the more robust position in Syria was revealed by National Security Advisor John Bolton’s four days of discussions in Jerusalem that began on August 19. Bolton said that the United States had been discussing Syria policy with Moscow. He emphasized that Russia was not committed to Iran’s presence in Syria and would be fine with seeing Iran leave.

Bolton said the United States opposes Iran’s attempt to create an “arc of control from Iran through Shia areas of Iran into Syria, linking up to Hezbollah.” This reflects a meeting of minds between Jerusalem’s view of Iran’s role in the region and the Trump administrations. Bolton supported Israel’s attempts to prevent weapons transfers to Hezbollah via Syria through airstrikes. He went on to say that Iran was a “central banker of international terrorism” and that the United States wanted to put maximum pressure on the regime to deny it nuclear weapons, ballistic missiles, and roll back its forces in the region. Everything, short of regime change. Bolton also said that U.S. sanctions pressure would seek to dramatically reduce Iranian oil exports and that should give a tailwind to the popular demonstrations in Iran fueled by a failing economy.

Taken as a whole, between the NDAA’s calls on the Defense Department to come up with a strategy, the new Iran Action Group at the State Department, the U.S.-led coalition’s active role in Syria, and Bolton’s Jerusalem visit, a wide-ranging policy on Iran has finally taken shape a year and a half after Trump took office. This is primarily a product of the Bolton-Pompeo team.

Mattis is a key to the new policy as well. He called Iran an “exporter of instability across the region,” at a July press conference. He said nothing had changed the ground in terms of confronting Iran. He stressed that the fight against ISIS was “by, with and through,” the U.S. partners in Syria and that the United States would not “put U.S. troops in to provide the security.” Instead the United States would be going back to Geneva to pursue the diplomatic track.

This then is the upcoming question for U.S. policy and it seeks to coordinate efforts. Can the U.S. presence in eastern Syria be used to leverage Iran out of the country? If that happens will Hezbollah be cut off from arms transfers, or will they simply be flown in via Beirut or some other means? And the largest question will be what happens in Iraq. No matter what government is formed the legacy of deep Iranian penetration of the country will not go away. The well-armed Shi’ite militias may be shifting their checkpoints or being redeployed in places but they won’t all lay down their weapons. Washington has other allies in Iraq, including the Kurdish parties in the north, and it has ways to pressure the Iranian regime by being more active in support for dissident groups in Iran. The U.S. administration now has the tools and the coordinated backing of key pieces of the government to pressure Tehran.