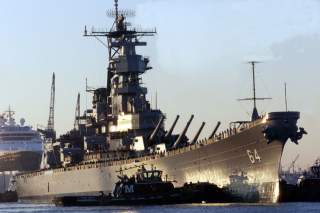 With World War II finished, the U.S. Navy faced a huge dilemma: what to do with the massive fleet of ships that it had constructed to defeat Japan and Germany. Some of the ships were sunk as part of the atomic bomb tests at Bikini Atoll; others were quickly scrapped. Many were mothballed, put into reserve in anticipation of a future war against the Soviet Union. For decades, this reserve fleet would wait for a war that never came.

The Iowa-class battleships symbolized the Navy’s problem. Constructed at great expense over the course of the war, the four huge battleships (Iowa, New Jersey, Wisconsin, and Missouri; two sisters, Illinois and Kentucky, would never enter service) offered capabilities that no foreign navy could match. However, technology had begun to render the battleship obsolete even before the end of the war; although the Iowas could perform carrier-escort and shore-bombardment duties, they would never face another battleship in combat (especially after the cancellation of the last Soviet battleship project).

But the Iowas were nevertheless magnificent ships, and various proposals emerged in and around the Navy to bring them back into service (indeed, even before the war was over some suggested converting the ships to aircraft carriers). These proposals would result in reactivations for the Korean War, the Vietnam War, and the last stages of the Cold War. Indeed, some hopes for modernization persisted even into the 2000s.

The United States Navy preserved seventeen battleships in the immediate aftermath of World War II, including the prewar “Big Five,” the two North Carolinas, the four South Dakotas, the two Alaskas and the four Iowas. The Iowas exceeded the rest in size and speed, and thus represented better candidates for future modernization. Three of the four Iowas entered the reserve fleet in the late 1940s. The beginning of the Korean War, however, brought the ships back into service, with all four conducting shore bombardment operations along Korea’s coast. The Iowas lost their World War II-era floatplanes in favor of helicopters, but otherwise remained largely unmodified (although they did pick up some nuclear-capable 16” shells) All four ships returned to the reserve fleet over the course of the 1950s.

In 1968 the United States Navy reactivated the USS New Jersey as a platform for shore bombardment of Vietnam. New Jersey lost many of her smaller anti-aircraft guns (almost useless against modern jet aircraft) and received electronic upgrades during the process of reactivation, but otherwise remained close to original conditions. For six months between October 1968 and March 1969, the battleship patrolled the Vietnamese coastline in search of targets.

USS New Jersey was eventually withdrawn, due both to the demands of the peace process, and because the Newport News heavy gun cruisers could adequately fulfill the shore bombardment mission. However, New Jersey and her sisters remained in the thoughts of Navy planners. The construction of the Kirov-class nuclear battlecruiser (at twenty-eight thousand tons, considerably larger than any U.S. surface combatant) lent weight to the pro-battleship voices at the Pentagon. The naval and military buildup that began in the late Carter administration and that would continue during the Reagan years would see all four battleships returned to service.

The Navy played with the idea of missile conversions during the 1950s. The battleship USS Mississippi had served as the platform for many of the Navy’s early surface-to-air missile tests, and a number of older gun cruisers found new life as SAM platforms. A one-ended conversion (removing one set of turrets) could have produced a useful enough ship, but not at a cost competitive with purpose-built vessels.

Many of the conversions envisioned by naval architects involved replacing one or more of the turrets on the Iowas with a flight deck. This concept had a long and distinguished history. In the early years of carrier aviation, Japan, the United Kingdom, and the United States often acquired aircraft carriers by converting existing battleships (or battleship hulls). In the United States this process included Lexington and Saratoga; in Japan Kaga, Akagi, and Shinano; and in the United Kingdom, Furious, Courageous, Glorious, and Eagle. The most evocative effort came in late World War II, when Japan removed the aft turrets from Hyuga and Ise, replacing them with a seaplane deck (although the Japanese never used the ships in this fashion).

The earliest and most plausible conversion concept for the Iowas involved removing the aft turret in preference of a flight deck that could operate a group of helicopters. Such a configuration would not only have given the Iowas the ability to defend themselves from their deadliest threat (Soviet submarines), but would have enhanced their contribution to the amphibious assault mission. The conversion also envisioned creating space for Marines and boats, potentially creating a very effective amphibious unit. However, the demands of Vietnam and the availability of older carriers for conversion killed the idea.

A more exotic and ambitious plan emerged in the 1970s. This involved installing “ski-jump” flightdecks that would give the Iowas the capability to operate AV-8B Harrier “jumpjets” after removing their aft turrets. Had the USN pursued this proposal, the Iowas could have played a role in their own air defense, as well as better supported a long-range strike mission. Supporters of this plan hoped that the full conversion would follow a more modest reactivation project.

In the event, the USN adopted the more modest plans for modernization. These included extensive electronic upgrades, the replacement of some 5” guns with Tomahawk and Harpoon missiles, and the addition of Phalanx point-defense systems. These improvements gave the battleships long-range strike capabilities, and helped facilitate the contribution that the four ships would make to military operations in the 1980s and 1990s, including USS New Jersey’s bombardment of Lebanon, and the participation of Wisconsin and Missouri in the 1991 Gulf War.

Expense killed the Iowas. None of the more exotic conversion projects could create a cost-effective weapon system with sufficiently unique and critical capabilities to justify the cost. The early 1960s amphibious conversion probably would have come closest to creating a useful, self-contained combatant, but Navy had plenty of other options at hand. The Harrier Carrier proposal of the 1980s, which would have resulted in the housing of an entire air group with concomitant command and maintenance demands, seemed tailor-made to turn an incredibly expensive ship into an even more expensive ship, for uncertain gains. And even though the battleships remained in good condition, over time Navy technology moved on, meaning that operating the Iowas required huge crews with specialized training.

A fatal accident on USS Iowa helped seal the fate of the battleships, but the writing was on the wall as the Cold War wound down. The last of the Iowas returned to mothballs shortly after the Gulf War. Missouri and New Jersey soon became national war monuments, while Iowa and Wisconsin remained in serviceable condition, pending any future decision to return them to service. Advocates for a return to service argued that the Marine Corps required the gunfire support that only the battleships could provide. In the end, the Zumwalt-class destroyers would offer a similar capability, meaning that Iowa and Wisconsin could finally retire to permanent berths in Los Angeles and Norfolk, respectively.