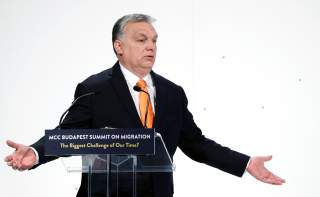 CHINA AND Russia are gaining wealth and influence in Europe with energy, banking, telecommunications and infrastructure deals that may entangle allies in relationships they cannot readily escape. Such moves should be checked, especially on the frontier of Central Europe. To its credit, the Trump administration reversed its predecessor’s approach and has re-engaged with this region, emphasizing common values and interests.

The challenge is that U.S. foreign policy will need to blunt European Union (EU) policy in order to compete for the loyalties of our erstwhile allies in Central Europe.

The problem is four-fold. First, different histories have bequeathed different cultures and perspectives to Central and Western Europe, which will converge only slowly. Second, Brussels requires that EU members adopt the same general domestic policies, which are usually informed by culturally progressive values that are at odds with Central European cultures—what works in Paris may not be suited for Bratislava. Third, clear policy failures by Berlin and Paris, along with the negative electoral reactions these have engendered in both East and West, have undermined confidence in the West and emboldened Central Europe. And fourth, the political elites in Brussels, Berlin and Paris seem oblivious—they do not seem to recognize that Central European nations hold different perspectives, nor do they see any need to change course.

To its credit, the EU has been enormously successful in moving the impoverished, formerly captive wards of the Soviet empire—namely, the four members of the Visegrád Group (V4): Czechia, Hungary, Poland and Slovakia—from failed command-economies to vibrant free-market economies, resulting in strong economic growth and low unemployment. The V4 countries certainly appreciate this, which explains some positive polling on attitudes towards the EU. Yet, on the other hand, a recent Eurobarometer poll found that only 33 percent of Czechs and 51 percent of Slovaks saw EU membership as “a good thing.” Why is this? Perhaps it is because while economic advancement is easy to embrace, EU policies have moved into the social and cultural realms—aspects of daily life in which Central Europeans are more conservative.

WHAT SEPARATES Europe’s East and West—the opening that China and Russia see as an opportunity—are the different cultural attitudes that lie beneath the surface, perhaps reflecting different stages of development, but resulting from contrasting historical experiences.

Absorbed for centuries into a succession of foreign empires—Ottoman, Russian, German or Austro-Hungarian—the V4 countries emerged from those ruins only in 1918. By the late 1930s, more decades of isolation and repression began under Nazi and Soviet regimes, with uprisings crushed in 1956 (Budapest) and 1968 (Prague) and martial law imposed in Poland. Emerging from this fresh hell as late as 1991, and finally joining the eu as recently as 2004, it should not be surprising that Central Europeans have different values. Last exposed to the fullness of European civilization in the 1930s, they are still learning just how much that civilization has changed.

Hungarian prime minister Viktor Orbán, for instance, is condemned for blatantly favoring “Christian culture” over multiculturalism, limiting immigration in a rejection of open borders, and supporting what used to be called “traditional family values.” Political and cultural progressives in the West may find such views repulsive, but they seem to forget that these views were widespread until only relatively recently. The United States, for example, severely limited immigration from about 1924 to 1965. Likewise, until recently, it was characterized as a Christian, or Judeo-Christian, country, and the traditional “nuclear family” was valued with little criticism or controversy.

Orbán’s views may seem dated here in the West, but he does not hold office here—and vilifying him will only drive him and his supporters into the arms of our adversaries. Of course, Orbán should be held to account for his embrace of Vladimir Putin and increased friendliness with China, to say nothing of his authoritarian ruling style. But to say that all of his views are an aberration of the contemporary norm is to impose a foreign standard on culturally distinct people.

As with Trump, the Orbán challenge is larger than one leader’s opinions. Polling confirms that large numbers of Central Europeans perceive an East-West divide in values; 52 percent of Poles and 51 percent of Czechs agree that “[t]here is a conflict between our county’s traditional values and those of the West,” according to a Pew Research Center poll. Even American democracy scholar Marc F. Plattner, a noted critic of Orbán, concedes that one of the reasons Orbán is successful in convincing his supporters that EU leaders are trying to enforce distinct, progressive views on them is “the fact that the ‘Brussels elites’ he is so fond of attacking tend to hold views close to those of U.S. liberals on social and cultural issues.”

Much of this would not matter if the EU focused on its original mission of creating and maintaining a free-trade, travel and currency zone for the aim of economic growth through greater efficiencies and economies of scale. The problem is that the EU has taken on a much more ambitious mission.

THIS IS the second issue: an EU doing things it was originally not intended to do. The progressive values embraced in Brussels, combined with ad-hoc and/or unilateral decisionmaking in Berlin and Paris, has shifted the EU agenda away from trade, travel and a common currency and into influencing Europe’s social and cultural life—a more personal and intrusive form of politics. Then came the sudden, unprecedented demands in 2015 that a million-plus unvetted migrants be distributed around EU states, seemingly dropped into every town and village. This was never an EU priority, and it certainly was not something that EU members had previously consented to. The Dublin Regulation, which EU members had agreed to, stipulated that asylum seekers must apply for asylum in the first EU country that is entered. Why, asked the V4 countries, should they be obligated to host migrants who didn’t enter through their borders, particularly since most of these individuals intended to apply for asylum in Germany or Sweden instead?

These sorts of progressive EU initiatives are advocated by people who had the luxury of growing up on the right side of the Iron Curtain. They have known only relative freedom and prosperity, and are so self-assured of their own good intentions that they feel confident they can build a transnational order based on abstract principles—assumed to be universal—that are derived from the application of human reason and the assumption of human goodness. Because these principles are thought to be universal, the resulting EU policies are uniform, taking no account of the harsh and uncertain histories of its eastern members, who rely on skeptical realism—and not utopianism—as their ethos. The West prizes self-expression; the East, self-discipline.

Brussels-led EU efforts to unify domestic policies across Europe thus resemble, to those in the East, the foreign policies of an alien power. In fact, it feels eerily familiar; comparisons have been made to the mandates from Moscow during the Soviet Union. This is why the eu’s eastern critics invoke domestic sovereignty; indeed, the V4 countries may feel they finally acquired domestic sovereignty—just in time to lose it.

Mountains of online reports make clear that Brussels is busily at work on issues, objects or ambitions such as—to quote its documents—social justice, gender-impact, income redistribution, solidarity, social exclusion, prison conditions, anti-Gypsyism, climate change, exploitation, discrimination, a living wage, anti-poverty programs and a participatory economy. There is much more of this, of course, the breadth of which leaves little room for EU members to govern themselves. In resisting a handful of these policies, Central Europe’s members are lectured to, threatened with sanctions and hauled into court. Until recently, Washington joined in these sorts of thumpings.

There are some examples of note. Until 2008, for instance, EU rules insisted that bananas “must be free from malformation or abnormal curvature” and that cucumbers must be “practically straight.” Today, merchants are forbidden to claim that water can prevent dehydration or that prunes can have a laxative effect. In 2019, the EU forced Slovakia to withdraw a 2.5 percent tax on a select category of retailers, and it dragged Czechia into court for failing to post energy-performance certificates in certain buildings. Meanwhile, Russia and China offer Central Europe economic investments and benefits without making anyone submit to such extensive legal and regulatory regimes.

More vexing are situations of the kind Latvia has found itself in. Eastern EU members are often accused of tolerating higher levels of corruption but, oddly, Latvia was ordered by the European Court of Justice this year to reinstate a central bank governor—whom Latvian authorities had detained on suspicion of corruption. The EU court ruled Latvia didn’t have “sufficient” evidence, though “sufficiency” could have perhaps been weighted in Latvia’s favor, since the institution at risk is Latvia’s own national bank. Since previous probes of Latvian banks revealed Russian money laundering and illegal dealings with North Korea, it seems the investigators might be trusted with this latest case. Instead, the EU Court of Justice ruling said it cannot “take the place of the national courts having jurisdiction ... nor even ... interfere with the preliminary criminal investigation being conducted ...” and then did just that.